James St. Patrick’s tenure as a public servant — or rather, a potential one — might’ve been the shortest in American history. In the final moments of Power‘s midseason finale Sunday, the businessman also known as Ghost was shot and fell from the balcony at his nightclub, Truth.

Who did it? Good question. In the lead-up to the shooting, no fewer than seven (!) people with a grudge against Ghost were shown to be packing heat: Saxe, Dre, Paz, Tate, Tariq, Tommy and Tasha. Each had a very good reason to want to take down the former drug kingpin, especially after he’d been chosen as Lorette Walsh’s potential lieutenant governor and had gone around for the entire hour asserting that no one was going to stop him from getting what he wanted.

We couldn’t let the episode pass without getting show boss Courtney Kemp on the phone to give us the lowdown on what to expect when the season resumes on Sunday, Jan. 5. Read on to hear what she has to say, but beware: She’s cagey! 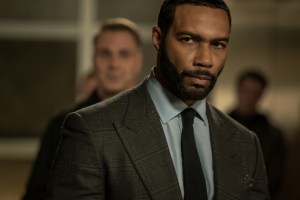 TVLINE | Is Ghost a ghost now?
[Laughs] He got shot. I didn’t see him die. Did you see him die?

TVLINE | I didn’t even see him hit the floor.
Correct! You did not.

TVLINE | How long will we have to wait to find out his fate after the show comes back?
If you’re a fan of the show, you probably know how fast you’re going to find out certain aspects of things. I’ll say that the who and the how here are going to be as important as the what.

TVLINE | Is there any time jump between where we leave off in the midseason finale and Episode 11?
No. In fact, what I will say is that the last five episodes are inspired by Rashomon. But I’m not going to say much more than that. 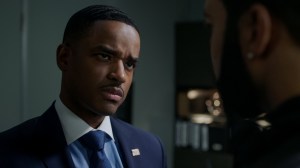 TVLINE | During the episode, Tasha brings up a good point: Ghost’s running for office is a good excuse for people to dig into his past. He clearly thinks he’s beat the system — why does he think he can evade, opposition research, for instance?
Ghost is in this weird space in American history where, having been a black man unjustly accused of murdering a law-enforcement officer, having been framed in fact by the U.S. Attorney’s office, he has a certain level of, “Yeah, they just want to get me” that he’s always going to be able to say. It wasn’t just that he didn’t do the crime, it was that he was actually framed; there’s a little bit of this bulletproof thing that he feels like he has. There’s that, and there’s the arrogance of having killed pretty much everybody who knows what he did. He did murder a lot of people who were hip to what he was doing and specifically, by the time we get to Episode 10 — and Angela says it in the episode: “You’re free now.” LaKeisha’s gone, Tommy’s out of [his] life. All of his connections to what he was are pretty much gone if nobody talks, and even if anybody talks, you can’t actually get convicted solely on accomplice testimony. So he feels like pretty much everybody in his life, he’s got on lock… Even Tasha, when she says, “Dude, you are a murdering drug dealer!” and he’s like, “Uh, no, you are.” [Laughs] He literally I-know-you-are-but-what-am-I’s that woman… That Ghost, he is full of piss and vinegar.

TVLINE | But then he also has the vision of Kanan telling him he’s not actually the man he’s telling everyone he is, which makes me think there’s some part of him that is worried he hasn’t beat the system. Is that an accurate read?
That’s a very accurate read. What I would say is Ghost has just enough imposter syndrome. The things he really does feel bad about are the three ghosts, the three Richard III-type ghosts — or, of course, A Christmas Carol — that visit him. He feels bad about Raina. He feels bad about Angela. And to some extent, he feels bad about Kanan, because Kanan was the original sin. He set him up from the beginning. That’s the person he set up first. So those people appear to him because they are the connections to what he really is.

TVLINE | Angela’s appearance feels like a goodbye. Is that a goodbye for Angela — and more specifically, Lela Loren — in the season?
[Exhales loudly] Kim Roots. Oh man. I got five more episodes. Why would I answer that question? [Laughs] … Angela is a very important part of Ghost’s journey. So it is possible that if Ghost’s journey is over, hers might be, too. 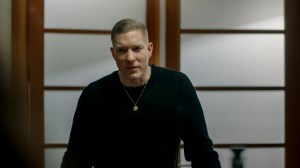 TVLINE | Of everyone coming for Ghost at the end of the episode, Paz was the person I was most surprised to see packing a weapon and walking with purpose. Talk to me about including her in that mix.
So let’s talk about who really has a reason to kill Jamie St. Patrick. Who are the people who might feel some type of way about all the things that he’s done and all the things that are indicated by his run for office. So if your kid sister fell in love with somebody that you literally 45 times said, “Stay away from. Stay away from him. Hey, you know who you should stay away from? That guy. And you know why you should stay away from him? Because you’re gonna get dead.” And then she showed up dead? Would you feel some type of way about that. Potentially, you might be like, “I am not down with the fact that my sister is not here anymore…”

TVLINE | Yes, definitely. It’s just that we have not seen Paz act in that manner before. It’s a surprise to see her there. It’s good, it’s just shocking.
But you did see Blanca tell her he’s gonna get away with it. Also part of the purpose of putting her there was some of our audience, to my mind, was not so unhappy to see Angela go. And I think that for them, from my perspective, I wanted to point out that people got hurt by that. She wasn’t just that girl you love to hate, the homewrecker, blah blah blah. She also had a family.

… I also really wanted to put Paz in the forefront, to some extent, to let people in on the fact that we are quite serious about the fact that a gun has no gender. It has no race. It does not care. A gun is here for what it is here for. It is a weapon of destruction.

Grade the midseason finale via the poll below, then hit the comments to elaborate upon your thoughts!