THE PERFORMANCE | Two episodes into Watchmen‘s freshman season, and we’re mesmerized by King as Tulsa police detective Angela Abar. Sunday’s installment gave the Emmy winner a wide range of emotions to play, and we were there for all of it. King’s sharp, fierce movements showed off Angela’s — excuse us, Sister Night’s — jaw-breaking anger during the Nixonville raid, which was juxtaposed nicely with the way she had the character take some much-needed, calming breaths in the car afterward. And Angela’s brief breakdown at the bakery, as well as a flashback to the White Night’s aftermath, allowed King to bring forward her character’s well-hidden vulnerability: As King swallowed tears, you could almost see the physical effort it took for the cop to rein in her emotions.

King used Angela’s bone-deep grief, brought about by the violent death of one of her closest friends and co-workers, as a bedrock on which to build all of her actions in the episode. The best example came when Angela had to tell her oldest child that Judd had been killed. King’s voice was gentle but the sentiment Angela shared was not: The world isn’t fair, she said matter-of-factly, King giving the boy a level look as she delivered the news and then staying placid as he acted out his angry response.

It’s no secret that King is a highly talented, versatile performer. But bringing this level of poignancy to a role in which she also wears leather and cracks skulls? Is there anything the woman can’t play? 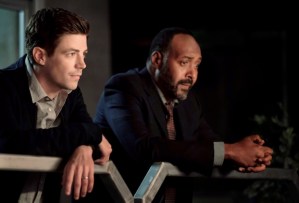 HONORABLE MENTION | You knew the moment was coming. Maybe you even dreaded it a bit (possibly because you knew you were out of Kleenex). And this week, The Flash went there — Joe poured out his own feelings about Barry’s doomed fate — and Jesse L. Martin is still wrecking us, even upon a fifth viewing. “This is what you get for saving the world over and over again? How is that right?” asked Joe, with Martin at first playing anger over anguish. “The world owes you. You deserve better than this.” When Barry argued that he is actually grateful for all that he has, most of all Joe (“You’re one of the biggest reasons I was able to become The Flash”), Martin flipped a switch, and despair overcame the father figure. “Bar, I’m not ready… I’m not ready for this. I’m just not,” he openly sobbed. “I know you say it has to happen but….” It’s OK, Joe. We are not ready, either. 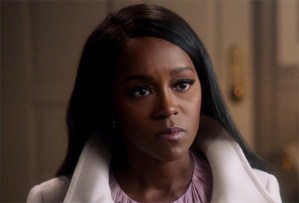 HONORABLE MENTION | It’s been a rough season for How to Get Away With Murder‘s Michaela, after a recent reunion with her birth father surfaced all kinds of complicated feelings. But Aja Naomi King has risen to the occasion of Michaela’s emotional arc, particularly in Thursday’s episode. It was a rare and heartbreaking thing to see Michaela let her guard down and shed tears in front of her dad, and King showcased wonderful restraint as Michaela communicated her resentment toward Solomon at Annalise’s apartment. Even more captivating, though, was Michaela’s fierce monologue to her father at the end of the hour, delivered by King with badass intensity. “Thank you for abandoning me,” Michaela told Solomon. “It made me even greater than I already am.” And we’d argue those words apply to the woman portraying her, too. 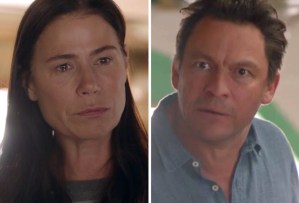 HONORABLE MENTION | Noah and Helen’s eventual reconciliation resulted in a superlative showcase for The Affair‘s Dominic West and Maura Tierney. West took Noah, a seemingly irredeemable character, and made us feel every pang of contrition as he shouted about the “worst f—king night of my life” and his willingness to do “anything, anything” to repair his relationship with Whitney. He nearly wrecked us as he silently processed that he was no longer invited to his daughter’s wedding. And then there was Tierney, who brilliantly played the duality of her character’s strength and frailty. Both were on display as Noah growled at her about being codependent. While the look in Helen’s eyes conveyed sadness, Tierney’s subsequent delivery of the line “I hope you burn” sent a chill down our spines, and served as a stern reminder that Helen is strong as hell — and that Tierney is among the finest actresses on TV.