Judd’s body is still swinging in the breeze when Watchmen returns for its second episode, and so are the myriad questions raised by the chief’s death (and, er, the entire rest of the show’s first hour).

Who put Angela’s boss up there? What, exactly, did the White Night look like? What’s the deal with Angela and Cal’s kids? How does one make Downton Abbey-ish clones? And was that squidfall a local weather system, or what?

Read on for the highlights of “Martial Feats of Comanche Horsemanship.” (And for Tom Mison’s thoughts on the revealing Watchmaker’s Son scene, go here.)

REVISITING WHITE NIGHT | Angela brings the old man in the wheelchair to her bakery, handcuffs him to some furniture, then goes into her inner sanctum to cry and hit things. When that’s done, she pulls herself together and suits up, just in time for the coffee she’s making for the man — who we learn is named Will — to be ready. 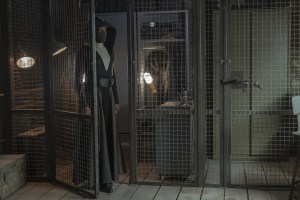 Will claims he’s 105 years old, he has psychic powers and that he killed Judd, who had “skeletons in his closet.” Angela is deeply doubtful of all of this, especially when he starts nattering on about a vast and insidious conspiracy, but then she gets paged and leaves — but not before bagging his coffee cup like it’s a piece of evidence.

She drives back to the tree where the police are now investigating Judd’s murder. Looking Glass is there, laconically noting that Judd was “alive the whole time, until he wasn’t.” The detective seems kinda suspicious of his co-worker; when she says she was with her kids the night before, he needles her by asking, “your kids?” As they cut down Judd’s body, she remembers the Seventh Kavalry’s White Night attack a few years earlier.

In the flashback, Angela and Cal are about to get frisky in the living room on Christmas Eve when armed Kavalry members break in and start shooting. Angela knifes one but gets hit by another. She blacks out as the man is standing over her… but then wakes up in a hospital bed, with an injured Judd sitting vigil. He informs her that 40 police officers’ homes were hit; her partner, Doyle, was killed, as was his wife. But their kids, led by oldest brother Topher — aka the boy we were introduced to as Angela’s son last week — saved himself and his sister by hiding in a closet.

Pretty much the entire police force is resigning, Judd tells Angela. But the two of them vow to stay. She’s being stoic, but he gives her permission to cry. “Maybe later,” she says. We get the sense that Angela and Judd weren’t close before this, but the event has bonded them deeply.

TROUBLE IN NIXONVILLE | After leaving the murder tree, Angela joins other cops at Nixonville, aka the place where she busted into that guy’s trailer and brought him in for questioning. The mood between the Kavalry-sympathetic locals and law enforcement is tense, so when someone throws a bottle, the police unleash. Angela thinks the roundup is unnecessary and stays out of it, until a dude with a baseball bat comes after her and Looking Glass. Then, she punches the guy’s head until it’s a bloody blur.

That done, Angela heads to the Greenwood Center, a site memorializing those who died during the massacre that opened the series’ premiere. It’s also a place where you can test your DNA to see if you deserve reparations — championed by President Robert Redford, and colloquially known as “Redforations” — as a descendant of someone involved in the horrific attack. Angela swabs Will’s coffee cup and puts the sample in an automated kiosk.

WHAT WAS JUDD HIDING? | Back in civilian garb, Angela goes to the wake at Judd’s home. Sen. Joe Keane (hi, Mad Men‘s James Wolk!), a politician with designs on the White House, is there, too. Apparently Judd’s wife, Jane, used to work for him. Keane asks Angela about police work but she passes out, waking up in the master bedroom with Jane telling her to rest a while.

In reality, Angela just swooned in order to get upstairs. She dons x-ray goggles and spies around Judd’s closet, finding a Klu Klux Klan (or is that Kavalry in this iteration?) robe and hood on a bust in a secret compartment of the wardrobe. Even the unflappable Angela is taken aback at that one.

GOTTA BREAK A FEW EGGS | Will is still chained up at Milk & Hanoi, so Angela can’t understand how he’s cooking eggs when she returns. She throws the robe at him and accuses him of setting Judd up. But then she gets an automated call from the Greenwood Center: Will is confirmed as someone involved in Black Wall Street, and Angela is his granddaughter. What’s more, they have another (as yet unnamed) living relative in common.

“I wanted to meet you and to show you where you come from,” he explains, but Angela doesn’t want to hear it. She arrests him and puts him in the car. But before she can get in, a craft flies overhead, drops a giant magnet on the vehicle, and carts it off, with Will smiling the whole time. As he departs, the “Watch over this boy” flier floats down, and Angela catches it. “What the f—k?” she wonders aloud. 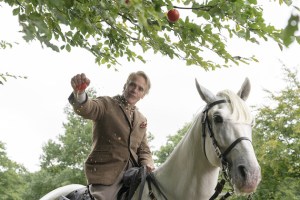 * The piece of paper the old man got from his father during the Greenwood massacre was originally a German propaganda leaflet dropped over American troops stationed in Europe during World War I.

* The squidfalls were a global phenomenon.

* At a newsstand not unlike the one in the comic where the kid reads Tales of the Black Freighter, a young woman buys a bunch of publications.

* American Hero Story has a hilarious amount of warnings before it airs. The show-within-a-show tells the story of Hooded Justice, one of the Minutemen collective that preceded the Watchmen in the original comic.

* The man living on the British estate stages the “tragedy in five acts” he talked about last week, with his servants playing the roles. The tale is actually the backstory of how nuclear scientist Jonathan Osterman became Doctor Manhattan. And we learn that the Mr. Phillips and Miss Crookshanks we’ve met are just two of many clones the man has in the manor with him.

Now it’s your turn. Tell us what you thought of the episode!