What does a famous TV journalist do when her entire world crumbles in the wee hours of a weekday morning?

The complicated answer is the basis of Apple TV+’s The Morning Show, which premieres today. In a moment, we’ll want to hear your thoughts on the premiere, which marks Jennifer Aniston’s first series-regular role since Friends. But first, a quick recap:

As the hourlong drama opens, the senior staff of America’s highly popular The Morning Show gets woken up by a bad-news call: Co-host Mitch Kessler (The Office‘s Steve Carell) has been fired for sexual misconduct. Executive producer Charlie “Chip” Black (The League‘s Mark Duplass) isn’t able to get the news to Kessler’s co-host Alex Levy (Aniston) until she arrives at the studio for that day’s broadcast. “Oh my God,” she says, seeing his face as her car rolls up to the entrance, “who died?” 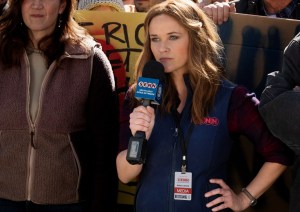 News of the scandal spreads quickly. In West Virginia a few hours later, Bradley Jackson (Big Little Lies‘ Reese Witherspoon), a correspondent for another network, learns of Kessler’s firing but quickly moves on. “One less idiot to peddle soft news to the masses,” she quips to her producer and cameraman as they set out to cover a protest near a coal mine. By this point, we’ve learned that Bradley is an impulsive hothead who doesn’t suffer fools. So when a protester shoves her cameraman to the ground and Bradley starts screaming at the pusher, it’s not a huge surprise. What is a surprise — to Bradley, if no one else who lives in contemporary society — is that onlookers film the moment on their cameras. Not long after, her tirade goes viral. And when her supervisor confronts her about it, she angrily quits.

Back in New York, an in-shock Alex addresses the show’s audience solo, then tosses to commercial and almost cries during the break but manages to keep herself together. At home, Mitch watches and screams that his co-host of 15 years is throwing him under the bus. He continues to rant that he had consensual affairs — but he didn’t do anything wrong. “I didn’t rape anybody! I didn’t fire anybody!” Then he destroys his TV with a fireplace tool just before his wife walks in and calmly informs him, “I’m divorcing you. I haven’t liked you for a while, anyway. Goodbye.”

Meanwhile, the network’s news head Cory Ellison (Almost Famous‘ Billy Crudup) shows up in New York to oversee the Morning Show situation. He formerly presided over the entertainment division, and his sensibilities are far more P.T. Barnum than Edward R. Murrow. And given that the show’s ratings have been down, and Alex hasn’t been “brilliant” on-air in years, he wants to replace her. So when Morning Show booker Hannah (Black Mirror‘s Gugu Mbatha-Raw) brings Bradley to New York for a segment in a series about strong women, Cory takes notice — both of Bradley’s on-air spark and how she holds her own against an increasingly combative Alex during the interview.

Later that night, Alex sneaks into Mitch’s house (to avoid the paparazzi camped outside). “I came to tell you that I am so mad at you, and I will never, ever get over it!” she cries. “Our star was built on chemistry, and you just blew it up!” He quickly assumes that she’s jealous “because we had a thing,” but she counters that sleeping together twice doesn’t quite qualify as a “thing.” She sadly notes that she sacrificed everything for the show, and now he’s put her in a position to lose it.

Mitch apologizes… but maintains he didn’t do anything wrong. Alex hugs him, saying, “I’m sorry you’re such an a—hole.” He replies, “Me, too.” She adds, “I wouldn’t use those two words together if I were you.” When she tries to leave, he begs her to stay and — in a last-ditch effort to get her to keep him company — blurts out that the network was going to replace her. This news takes Alex aback.

Elsewhere, Cory calls Bradley and asks her to meet him for a drink to discuss her future. “What is this, my big break?” she says, suspicious. “Well,” he replies, “I suppose that’s up to you.”

Grade the premiere of The Morning Show via the poll below, then hit the comments with your thoughts!