This year’s crop of Halloween costumes featured on TV aren’t exactly spooky, but they are rather nostalgic.

Take, for instance, The Conners‘ Mark, who is dressed as David Bowie’s alter ego Ziggy Stardust, or Good Morning America‘s Robin Roberts, who is costumed as disco-era diva Donna Summer. Then there are nods to beloved TV shows from the past, with the Johnson family on mixed-ish representing characters from The Facts of Life, Laverne & Shirley and Miami Vice, and Al Roker taking a not-so-“Unusual” approach with his ode to The Fresh Prince of Bel-Air.

From cute (Single Parents‘ Wilson the Volleyball) to cringe-worthy (Perfect Harmony‘s makeshift Chippendale’s dancer), simple (Superstore‘s Notorious RBG) to cerebral (Modern Family‘s Sigmund Freud), TVLine has assembled nearly 60 photos highlighting dozens of costumes from the small screen. (If you’re hoping to see the costumes that the TV stars themselves wore this year, that gallery is here.) 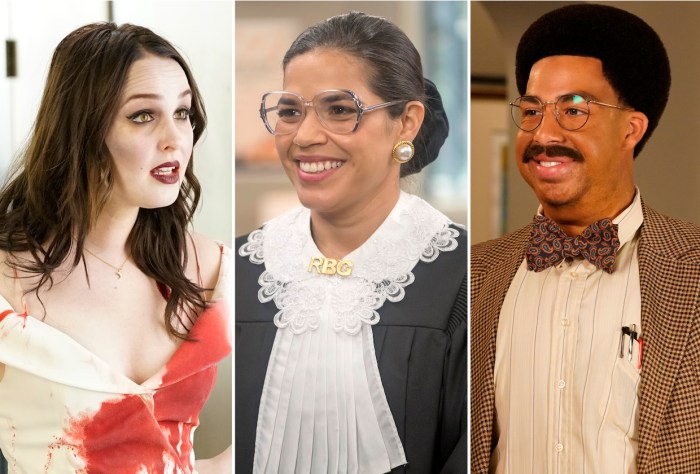 Along the way, you’ll also encounter a few synergistic getups (including Modern Family‘s Gloria dressed as Frozen‘s Elsa, and an American Housewife duo dressed as two of Marvel’s Avengers). You’ll also lay your eyes on a few costumes you’ll wish you could unsee, even though that probably wasn’t the intention. (Sorry, not sorry, Ellen!)

Our gallery also features Halloween snapshots from Grey’s Anatomy, Hawaii Five-0, Riverdale, Evil and more, as well as daytime and late-night series such as The Kelly Clarkson Show and A Little Late With Lilly Singh.

Scroll through attached gallery to see this year’s costumes, then hit the comments and tell us: Who pulled off the best look?