We’re used to seeing TV stars play dress-up on the regular — just not in these costumes.

With Halloween approaching on Thursday, familiar faces from the small screen have exchanged their usual alter egos for (temporary) new ones. And it’s not just fictional characters in the mix this year: Brooklyn Nine-Nine‘s Stephanie Beatriz and The Vampire Diaries alum Nina Dobrev both dressed up as real-life singer Billie Eilish, while American Horror Story‘s Evan Peters and pop songstress Halsey donned Sonny and Cher costumes.

Meanwhile, two Agents of S.H.I.E.L.D. served up some ’90s nostalgia as Mary-Kate and Ashley Olsen, and Limetown star Jessica Biel took inspiration from her own husband, Justin Timberlake. 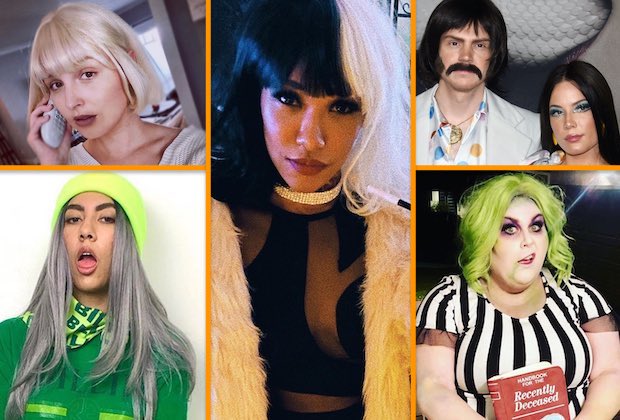 That said, plenty of characters from TV and film have appeared in this year’s crop of costumes thus far, including Disney baddie Cruella de Vil (as played by The Flash‘s Candice Patton), Scream victim Casey Becker (Grey’s Anatomy‘s Camilla Luddington) and a sultry take on Rick and Morty‘s titular scientist (from Riverdale‘s Camila Mendes).

We’ll be updating the attached gallery in the coming days, so be sure to bookmark it and check back through Halloween. In the meantime, scroll through this year’s photos (click here for direct access) and tell us which costumes impressed you most.