Both Gary’s dog and his common sense go wildly off-leash in this week’s A Million Little Things. The good news: He gets at least one of them back by the end of the episode.

But that doesn’t mean that the relationship troubles that have been bubbling between Gary and Maggie since the beginning of the season are about to roll over and play dead. In fact, by the end of the hour, they’re still in quite a ruff place.

Before I cram any more bad canine puns into this recap, let’s review the highlights of “Unleashed.”

FIND THAT DOG! | The morning after Maggie’s Open-Mic Night for 1, she and Gary walk Colin the dog. Gary not-really-casually asks where she was the night before, and she tells him the truth. Then Gary goes inside while Maggie fields a call from Eric: He’s got some Oasis sheet music she was interested in, and, hey, did she know that Gary was at the piano bar the evening before? Back upstairs, Maggie wants to know why Gary didn’t mention that he’d gone to find her. But before they can get into it, he realizes that their massive pooch is nowhere to be found: In preparation for returning to the apartment, Maggie took off his leash while she was on the phone with Eric. And because she was distracted, she didn’t realize that Colin didn’t follow her inside.

A highly worried Gary contacts all of his friends for help finding the pup. Rome and Regina bring PJ, who happened to be at their apartment when the call came. Since the DNA test isn’t back yet (must… refrain… from making… Lizzo joke…), Rome makes PJ promise he won’t say a word to anyone about his suspicions that Jon was his father. And Eddie is free to join the gang when Katherine steps in for him and offers to watch Charlotte for the day while Delilah is off taping a podcast about grief. 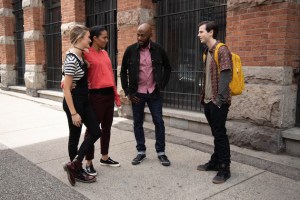 While Maggie skulks about guiltily, Gary’s anxiety ramps up. “How long are we going to stand here before someone tells me who this random kid is?!” he asks the group, gesturing toward PJ. Once introductions have been made, Maggie pretends not to know the teen, despite the fact that he’s one of her clients. Then she volunteers to stay home in case Colin returns on his own, and Gary is OK with that, because he really doesn’t want to be around her at the moment.

ANDREW FINALLY TELLS THE TRUTH | Elsewhere, Andrew drives Delilah to her interview and seems to grow increasingly uncomfortable whenever his wife, Deborah, comes up in conversation. And then we find out why: She’s not dead, like Delilah thought (and he’d led her to believe). But the situation is not as nefarious/jerky as it might seem at first. Three years ago, Deborah had a stroke and hasn’t woken up since. She’s comatose and is cared for at a nursing home; Andrew brings Delilah to see her. “I don’t expect anyone to understand,” he says sadly. “That’s why I lied.” Delilah assures him that she does, in fact, understand.

Meanwhile, Katherine falls a little in love with baby Charlie during their hangout day. When Delilah comes home, she gifts Katherine with the scotch set from his office, which he left to her because they used to share a drink at his workplace while Eddie was newly sober. And in case you thought this warm moment between Eddie’s women was going to last, please allow Katherine to end it: She suddenly announces that she doesn’t want any more lies in her life, and “I’m starting to think that we should tell the kids the truth” about Charlotte’s parentage. 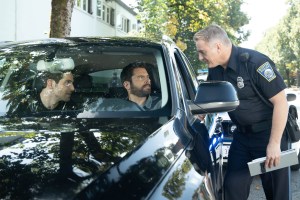 WHAT DID GARY SAY?! | Eddie drives with Gary, and it quickly becomes clear that a misplaced pet is not the cause of all of his troubles. Gary’s anger and frustration boil over and he blows a stop sign; a cop pulls him over a moment later, and… it’s Jason, the lethal drug kingpin from Power! Run, Gary, run! (It’s actually just actor Mike Dopud, whom I assume is a lovely individual.) Eddie smoothly explains Colin’s absence to the officer, who takes pity on them — “I have a bulldog at home. I don’t know what I’d do without him.” — and lets them go. Gary marvels at his friend’s interception. “That’s what Jon would have done,” Eddie replies. 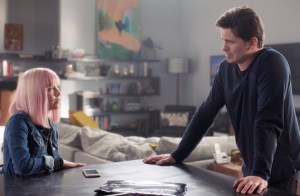 Gary eventually winds up back at home… just in time to see Eric there. (He was dropping off the sheet music.) “What is he doing in our life?!” Gary demands, asking why Maggie is being so secretive about the man now in possession of her brother’s heart. Their argument then goes back to her belief in the psychic from a few episodes again, and then it gets WAY uglier. “I thought watching your mother try to replace your brother with a complete stranger was the most pathetic thing I’ve ever seen, until I saw you do it,” he sneers. WOAH. “You know what?” Maggie shoots back. “I am sorry I lost your dog. But don’t make me want to leave, too.” Eric later calls and leaves her a voicemail saying that it’s probably best for him to peace out of her life for the time being.

HARSH HOMECOMING | Back out on the hunt, Gary and Eddie wind up at an animal shelter where a dog matching Colin’s description has shown up. But the dog isn’t him — and Eddie sees a year-old flier for a lost dog and realizes that Gary’s pet is actually someone else’s MIA mutt. He’s about to tell his friend the bad news, but then Rome calls with the best news: After PJ heard some barking coming from the apartment building’s garbage area, they all raced downstairs and found poor Colin trapped there, aggrieved but totally fine. Happy belly scratches all around!

A very relieved Gary thanks his friends for dropping everything to find Colin, then gushes over PJ, calling him a “hero.” He also reaffirms that he loves Maggie and asks her to forget that the day ever happened (and that he said that really hurtful stuff), but Eddie showed her the lost-dog flier, and she knows that she needs to break it to Gary. “Nah, Colin’s mine. This is home. That’s not fair,” Gary says, incredibly close to tears. He walks away, and Colin follows him as he leaves the room.