Here’s a sentence you probably weren’t expecting to read today: Tyler Perry‘s latest drama series about the White House is even crazier than his last one.

Three years after enchanting us with TLC’s short-lived Too Close to Home — which began as a drama about a young woman caught having an affair with the President of the United States, then pivoted to being mostly about incest — Perry is back with BET’s The Oval, an over-the-top soap chronicling the deranged shenanigans of a newly inaugurated POTUS and his certifiable family. (Here’s hoping this show stays on target and doesn’t also pivot to being mostly about incest.)

The Oval, which continues tonight (9/8c) with its second episode, immediately establishes tension between the President and the First Lady. But not with words. No, ma’am, that would be too easy. Instead, The Oval — in the opening scene of its very first hour — gives us a knock-down-drag-out brawl of old-school Dynasty proportions. Here’s a taste:

The insanity continues in the show’s opening title sequence, which introduces viewers to no less than 15 named characters, complete with each person’s (occasionally loose) connection to the First Family. Some of the more bizarre descriptors include “Friend of Lilly” and “Pharmacy Owner.” Behold the veritable mosaic in all its glory: 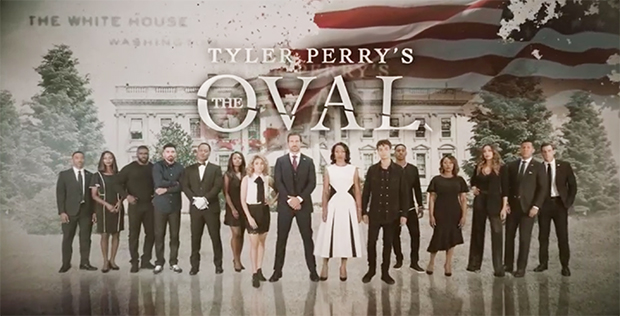 And did I mention there’s a storyline about a cult? Because of course there’s a storyline about a cult! In this case, Ruth — the White House butler’s son’s baby mama, which should give you an idea of how wide this show’s circle of characters extends — is trying to kidnap her daughter at the behest of her cult’s leader, a man known simply as “The Highest.” It’s a bafflingly ridiculous storyline that feels completely out of left field, even for a show executive-produced, created, written and directed by Perry.

Need more reasons to watch The Oval? How about the endless feel-good moments between the First Lady and First Daughter? (“You are the absolute worst, you ungrateful little bitch!”) Or the unsolicited shout-outs to the bygone era of the Obamas? (“So much class! No drama, no hassle. Just good, salt-of-the-earth people.”) Hey, maybe you’re the kind of person who simply enjoys watching a woman cheat on her husband with a stranger in an airport bathroom. Whatever you’re into, The Oval serves at your pleasure.

Are you watching The Oval? If so, drop a comment with your thoughts on the BET drama below.