If going into Tuesday’s Knockouts on The Voice, you felt like you’d been smacked upside the head, you weren’t alone. I, too, was seeing stars — and not entirely in a good way.

During the Battles, Blake Shelton had let go Cory Jackson, a contestant who was all but laminated in star quality, in favor of the just-pleasant-enough Zach Bridges. And in Monday’s Knockouts, he’d dumped Marina Chello after she’d practically sung a lung out in favor of Cali Wilson, whose performance had been mostly pretty but somewhat uneven. I was so flummoxed, I started to think, “Is he throwing this thing to give his girlfriend a better chance at a win?” (To date, Gwen Stefani has never coached a contestant to victory.) 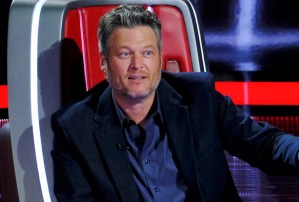 But then, he’d also made the shrewd move to use his Steal on Team Kelly Clarkson’s Lauren Hall. (Adorable and promising as Hello Sunday are, that Kelly named them the winner of that Battle was a head-scratcher of its own.) So I didn’t know what to think — other than that John Legend pretty much has a lock on a Season 17 win; his team is completely dud-free.

What mystifying moves did Blake and his fellow coaches make Tuesday? And did any of the Knockouts really, you know, knock you out? Read on, and after we review the performances, you can vote for your favorite of the night and assign your own grades in the comments section. 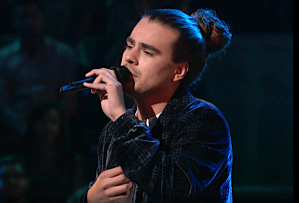 Team Legend: Khalea Lynee singing “Because You Loved Me” (Grade: A) defeated James Violet singing “Stay” (Grade: B-) | In rehearsal, James sounded pretty soulful on his Post Malone cover. But mentor Taylor Swift questioned whether he was meandering too much — perhaps even meandering away from the notes that he meant to hit. John, in turn, advised James to throw in a couple of showstopping moments. Trying out her version of Celine Dion, Khalea totally dazzled Taylor. In fact, the only issue she had was a single line on which Khalea had gone with a countermelody rather than the melody. On stage, Khalea gave another pitch-perfect performance, right down to the near-whistle high note at the end. At times, she was so good, she called to mind Whitney Houston; even John thought so. And Khalea definitely made me forget once or twice what a snoozicle I’ve always thought this song was. James’ lane is so different from Khalea’s that it’s almost hard to compare the teammates: Whereas from her you want flawlessness, from him, you want a raggedy authenticity — and he delivered that when he took his turn in the spotlight. He sounded like the sonic equivalent of a beat-up old sweater that you wouldn’t give up for a million bucks — threadbare and beautifully lived-in. But it felt like he was throwing away some of the lines a little too casually. (Hmm… that meandering again?) Former coach Gwen also nailed him for oversinging here and there. In the final analysis, Khalea’s combination of precision and emotion was, for my money, impossible to beat. 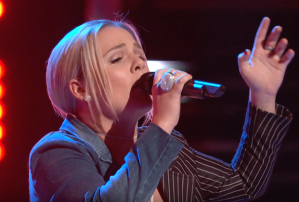 Team Gwen: Kyndal Inskeep singing “Elastic Heart” (Grade: B) defeated Jessie Lawrence singing “Dancing With a Stranger” (Grade: C) | Before rehearsal, Gwen explained that she’d paired Kyndal and Jessie because they were both emotional singers with their own styles. Oh, Gwen, it’s OK to say you paired a coupla singers just because you had to pair a coupla singers. You don’t have to say you paired them because basically, oo, they both have two legs apiece. Anyway, she advised Jessie to bring out more personality on his Sam Smith/Normani cover. Taylor instructed him to assign specific emotions to each line. After hearing Kyndal try out her Sia cover, Taylor said that it was interesting — and clarified that she didn’t mean that in a passive-aggressive way. She also suggested Kyndal make the beginning of the song very defeated so that her triumph in the end would be even sweeter. Up first on stage, Kyndal — was she wearing Madonna’s “Express Yourself” suit? — did indeed sound interesting. As strong as her voice is, it quavers a lot, which made for a fascinating contrast between power and vulnerability. She didn’t blow me away like (sigh) Marina Chello Monday, but this was a really successful performance. When Jessie stepped up to the mic, he sounded oddly muted — like I wanted to turn up the volume on him. Kelly said he’d been appropriately breathy, but I wished there had been more oomph behind the breath. He hit a nice run or two; however, when he was done, I felt like he hadn’t ever really gotten started. 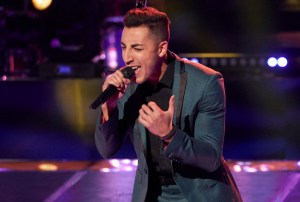 Team Blake: Ricky Duran singing “She Talks to Angels” (Grade: A) defeated Joana Martinez singing “California Dreamin'” (Grade: B) — Joana stolen by Gwen | The Voice really needs to stop telling us there’s a Steal coming up; by the time the last Knockout rolled around Tuesday, we knew we didn’t have to worry that either of these singers would be eliminated. But that’s another quibble for another day. After Joana tried out her rockin’ Mamas and the Papas cover, Taylor’s big note was that she shouldn’t repeat the same gesture over and over again. Which was pretty impressive, considering how star-struck she was. After showing Blake and Taylor how he sounded on his Black Crowes cover, Ricky was advised to sing less technically, more believably. And whatever he does, don’t hold a guitar as if he should be playing it if he isn’t going to play it. Performing first, Joana began her number with so much power and clarity to her voice, I thought I was seeing clouds parting that weren’t even there. My interest waned as she went on — it was a little one-note, a little “I’m gonna sing as loudly as I can” for the duration. But there was no doubt in my mind that she deserved the Steal I suspected she was gonna get rather than Ricky, who might as well get a Fast Pass to the Final Four. And speaking of Ricky, when he let his Crowes fly, man, he kicked the song hard in the rasp. Plus, he demonstrated so much more comfort with and range to his voice than Joana had with hers that I’d have given him the win, hands down. As Kelly put it, “Ricky, you’re bad — you’re good!”

So, has anyone else been bewildered by Blake’s decisions this season? Just me? (If I have to, I can live with that.) Vote your favorite of Tuesday’s performers below, then hit the comments.