Dancing With the Stars celebrated Halloween on Monday night, and it was nothing short of a graveyard smash. (And not just because Sean Spicer performed to “Monster Mash,” which is a sentence I never thought I’d write.)

On the heels of Sailor Brinkley-Cook’s shocking elimination last week, the remaining Season 28 hopefuls had to raise their game this time around, and many of them brought Halloween treats to the dance floor this week.

Of course, the festivities turned into a horror story for one unlucky couple, who was eliminated from the show ahead of next Monday’s Dance-Off Week — and for the second week in a row, the results were surprising and rather disheartening. But before we discuss who got boo-ted (heh), let’s break down all of the latest performances:

Kel Mitchell and pro Witney Carson (Jive) — I did just get a new pair of glasses today, so perhaps my eyesight can’t be trusted, but I was expecting a bit more from this jive. Kel’s kicks surpassed “crisp” and fell more into “rigid” territory at times, and he seemed a bit unsure in his transitions. (That said, I am here for that fantastic snake makeup.) Judges’ Score: 27/30

James Van Der Beek and pro Emma Slater (Viennese Waltz) — James has proven himself to be a reliably solid dancer each week, which hinders him as much as it helps him. While this Viennese waltz was perfectly competent and well-executed, it didn’t really leave me feeling anything. At this point in the competition, it might not be enough to turn in pleasant-but-unmemorable performances, which is how I’d categorize Monday’s showing. Judges’ Score: 27/30

Ally Brooke and pro Sasha Farber (Tango) — Confession: When I saw that Ally and Sasha were dressed as Harley Quinn and the Joker, I took a little detour to rewatch James Hinchcliffe and Jenna Johnson’s Season 23 waltz, which was wickedly good. But Ally and Sasha were really impressive in their own right on Monday, bringing strength, passion and personality to this near-flawless tango. Judges’ Score: 27/30

Hannah Brown and pro Alan Bersten (Jazz) — I was excited to see Hannah embodying a sassy, sultry character this week, which gave her usual megawatt smile a little break. Plus, it says something about her command of choreography that she could spend most of this routine detached from Alan, leading an entire pack of backup dancers. But Hannah does seem to be struggling with emotional connections to her dances — even dances that involve zombie pageant queens! — in much the same way that Simone Biles struggled when she was on this show. I’d like to think that Hannah’s technical proficiency and substantial fanbase would be enough to get her to the finale, but time is running out for her to set herself apart from her competitors, especially those who are peaking at just the right time. Judges’ Score: 25/30 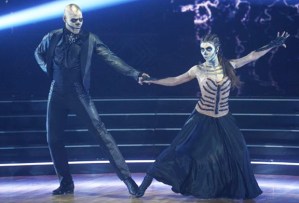 Karamo Brown and pro Jenna Johnson (Paso Doble) — There were a lot of reasons to love this dance that had nothing to do with the actual dancing. That sinister cover of Destiny’s Child’s “Survivor”? Yes, please. That incredible skeleton makeup on both Karamo and Jenna? Double yes please. But the cherry on top is that this was easily Karamo’s best dance. His movements were incredibly sharp and strong, including those knee-bends that he had to tackle solo. It’s all too easy for the paso doble to veer into cartoonishly dramatic territory, but this performance was wonderfully restrained. Judges’ Score: 25/30

Lauren Alaina and pro Gleb Savchenko (Argentine Tango) — Lauren is having the exact arc that I love to see from any Dancing contestant: She started out slightly shaky, but with plenty of potential, and she’s spent every subsequent week honing her skills to become a real contender. And with fractured ribs, no less! The American Idol alumna brought a sensuality to this number that I never would have expected — remember a few weeks ago, when she was nervous about putting a single leg up on the hood of a car? — and her legwork was fabulously confident. Judges’ Score: 27/30

Sean Spicer and pro Lindsay Arnold (Jive) — Well, Sean was playing Frankenstein’s monster this week, so at least he could get away with some of that stiffness! All kidding aside, though, this may have been Sean’s weakest performance; his timing was off, his kicks lacked power and even though the troupe dancers usually help a struggling amateur, the backup mummies actually seemed to highlight Sean’s shortcomings even more. Also, I was a tad disappointed in the choreography here; Lindsay is in a tough spot when it comes to developing these routines, but I expected Sean to do a little bit more than just facilitate Lindsay’s twirls. Judges’ Score: 18/30

Kate Flannery and pro Pasha Pashkov (Rumba) — I don’t know if the kids still say, “Yas, queen!” these days, but this rumba is worthy of a “Yaaaaas, queen!” I’ve written before that Kate’s failure to commit to characters has been a bummer, which is why it was so refreshing to see her surrender to the rumba’s sexiness on Monday. Her movements were fluid, her connection with Pasha was compelling, and that final pose alone should have earned Kate at least one nine. (All eights, judges? Really?) Judges’ Score: 24/30

The much-feared team dances also took place on Monday night. Team Trick (made up of Hannah, Lauren, Ally and James) scored a 27 out of 30, while Team Treat (comprised of Karamo, Sean, Kate and Kel) earned a 24 out of 30.

Your turn! Do you agree with Karamo and Jenna’s elimination? And can we talk about the fact that Sean will almost definitely reach the finale? Drop a comment below with your thoughts on the Halloween episode.