We’ve reached the halfway point of Dancing With the Stars‘ current season, and that can only mean one thing: It’s time for the shocking, premature elimination of a very promising contestant!

Even though Dancing‘s Halloween episode won’t take place until next week, the ABC series gave its viewers a fright on Monday night by revealing two frontrunners as the in-jeopardy couples. Sure, the judges have their save this season — but that didn’t do much to console either amateur as they faced potential elimination.

Before we get to the results, let’s break down each pair’s performance from Monday’s broadcast:

Ally Brooke and pro Sasha Farber (Quickstep) — On the whole, many of the remaining Dancing couples have proven themselves worthy of the Mirrorball — though it seems that some frontrunners, like Ally and Sasha, have trouble holding onto their momentum. After earning three nines with their Disney Night contemporary last week, I thought for sure that Ally and Sasha were on their way to a perfect score this week. Instead, sections of this quickstep were a hair out of sync, and I was bummed to see Sasha subtly giving notes to Ally as they twirled and kicked around the ballroom. Judges’ Score: 25/30

Kate Flannery and pro Pasha Pashkov (Viennese Waltz) — This waltz was just as graceful and tender as the style requires, and Kate continues to prove that she has the best technique of maybe any Season 28 contestant. Strangely, even though Kate is an actress, she still seems to have trouble communicating the right emotions when she’s performing… but considering she had a vertigo flare-up this week, it’s hard not to give her the benefit of the doubt for an often-blank facial expression during this dance. Judges’ Score: 27/30

Kel Mitchell and pro Witney Carson (Quickstep) — One minute, Len Goodman is describing himself as a “happy chappy,” and the next, he’s making Witney feel terrible about the brief moment in this quickstep when she tripped on her dress. (If any of you could actually make sense of that jockey/horse metaphor, feel free to decipher it in the comments.) But rude judges aside, this dance was genuinely delightful — and not only because Kel was wearing that amazing polka dot suit. Just mostly because of that. Judges’ Score: 26/30

Karamo Brown and pro Jenna Johnson (Contemporary) — At the risk of getting booed by the DWTS crowd, I’ll admit that I wasn’t immediately wowed by Karamo during this number. The first two-thirds of the routine were mostly impressive because of Jenna-centric lifts — but then, finally, Karamo’s movements became powerful and sharp when he fell to his knees at the performance’s climax, and the emotion that he’d planned to bring to the dance showed up at last. Judges’ Score: 25/30 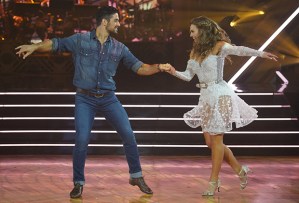 Hannah Brown and pro Alan Bersten (Samba) — I love Hannah! I love Alan! I love Carrie Underwood! Sadly, I did not love this routine; despite Hannah’s tremendous competence and ease on the dance floor, Underwood’s twangy “Southbound” wasn’t really a suitable soundtrack for the samba, and the mismatched combination was all too distracting. Judges’ Score: 24/30

Sailor Brinkley-Cook and pro Val Chmerkovskiy (Jive) — With all of its insanely fast kicks and flicks, the jive is one of Dancing‘s toughest styles — but Sailor absolutely held her own in this number, even bringing some wide-eyed theatrics to the performance. That said? Girl has gotta stop singing along with the house band. (Even though “Wake Me Up Before You Go Go” is a total bop.) Judges’ Score: 27/30

Sean Spicer and pro Lindsay Arnold (Viennese Waltz) — Now that we’re at the season’s halfway point, it’s crystal clear that Sean is the weakest contestant left. But that hasn’t deterred his efforts! No, this Viennese waltz wasn’t the most graceful in Dancing history — Sean’s arm flourishes were particularly choppy, especially compared to Lindsay’s rounded ones — but I can certainly respect his commitment to learning and improving each week. Judges’ Score: 21/30

James Van Der Beek and pro Emma Slater (Samba) — Len Goodman wanted hip action from James this week, and boy, did he get it. (Even though I could happily go the rest of my life without hearing “Tooty fruity, what a booty” ever again.) Simply said, this samba was straight fire, from James’ sharp footwork to the trippy light show during the “Light It Up” bridge. Judges’ Score: 27/30

Lauren Alaina and pro Gleb Savchenko (Contemporary) — Critiquing this performance, which fell on the one-year anniversary of Lauren’s stepfather’s death, seems pretty impossible. Fortunately, there wasn’t much to critique: Even though she was overcome with emotion before, during and after her performance, Lauren turned in a stunning routine, delivering gorgeous transitions and fearless lifts. Kudos to Gleb, too, for honoring Lauren’s loss with such compelling choreography. Judges’ Score: 26/30

And now, the (puzzling) results:

Well, that was a bummer! How do you feel about Sailor and Val’s elimination? Drop your thoughts in a comment below.