Warning: The following contains spoilers for Sunday’s episode of The Walking Dead.

Having been the baddest of bad guys for so long, The Walking Dead’s Negan might never have fully understood the meaning of “No good deed goes unpunished” — at least not until Sunday’s episode cast him as the hero, to disastrous effect. Read on, and we’ll not only break down what he did and why, we’ll review the circumstances that led to Michonne and Ezekiel’s first kiss. 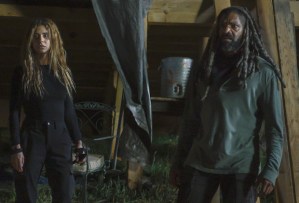 ‘WE’RE ALREADY AT WAR, WE JUST DIDN’T KNOW IT’ | Early on in “Silence the Whisperers,” a tree fell on a Hilltop barn, trapping inside it… er, no one we knew. While rescuers worked to get the injured out, Connie expressed her suspicion that perhaps the tree had had help falling. Oh, it definitely had, Alden and Earl said. In their estimation, this wasn’t Mother Nature’s doing, it was Lydia’s mother’s doing! The following morning, Gage, Alfred and Margo — and props to anyone reading this who knew who they were without having to look up their names (like I’ll admit I had to!) — made sure the poor girl knew that she was persona non grata in Alexandria. Afterwards, Negan found Lydia hiding among the clotheslines. And, although he offered sound advice — kill her detractors, but only with kindness — and might have kept her from eating the worm she was eyeballing, he still got a tongue-lashing from Daryl, who argued that hanging out with the Saviors’ former leader wasn’t going help the kid fit in. 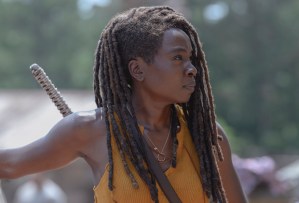 Meanwhile, en route to Hilltop, Judith offered to be “a fresh set of eyes or a friendly pair of ears” for Michonne, who reluctantly revealed to her daughter why the Whisperers had claimed more land. Maybe, Judith theorized, the villains were enacting a version of RJ’s bedtime routine, and trying to wear out the communities so that they’d have an advantage. When Michonne was forced to admit that that might just be the case, Judith — aka the cutest moppet on TV — cracked, “I knew RJ would eventually be good for something.” Shortly, Michonne spotted Ezekiel in the distance and, leaving behind her party, found him looking suicidal at the edge of a precipice. When she promised to stay with him until he felt he could back away himself, he surprised her with a kiss, for which he immediately apologized. Not that she wanted him to — she understood what he was going through, having lost Carol, Henry, the Kingdom. And “for what it’s worth,” she added, “you’re not a half-bad kisser.” Mind you, she hadn’t kissed anyone over four feet tall in six years. 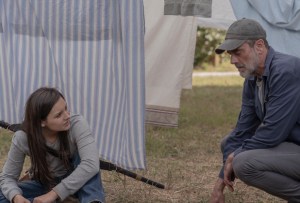 ‘NEGAN SAVED MY LIFE’ | As walkers crowded around outside Hilltop — threatening to bring down the rest of the tree and the barn with it — Lydia defiantly sat down to lunch with her tormentors, digging into a raw squirrel and thanking them for the “Silence the Whisperers” message they’d painted on Daryl’s house by creepily pressing her finger to her lips. “You can’t be doing s— like that,” Daryl grumbled, reading straight from the book of It Goes Without Saying. That night, Gage, Alfred and Margo cornered Lydia to suggest that she vamoose. When she refused, they began to beat the crap out of her and would have gone right on doing so, had Negan not intervened. Unfortunately, when he’d pulled Margo off of her victim, he’d thrown her back so hard that she’d cracked her skull. Immediately — and rightly — he guessed that this would not go well for him. For his part, Daryl didn’t know what to do. He believed Lydia when she said that Negan had saved her, but… s—, it was Negan. Further complicating matters for Daryl, Michonne told him over the radio that under no circumstances was he to let Lydia leave or be driven out. She might be the only thing keeping Alpha from unleashing the horde.

Speaking of walkers… Yumiko, Magna, Kelly, Connie and Luke were at that very moment trying to keep them from taking down the damaged wall to Hilltop. But when the newbies became too greatly outnumbered, Yumiko ordered them to retreat, prompting a lovers’ spat with her girlfriend. (“You’re not my lawyer anymore,” groused Magna later.) Ultimately, there was a breach of the perimeter, but the situation was under control by morning, thanks in part to Judith living up to her old Lil’ Ass-Kicker nickname. After taking the night to decide how to cast the tie-breaking vote that would decide Negan’s fate, Gabriel found the prisoner’s cell empty. Lydia claimed that she’d set him free, but since Daryl had kept watch over her all night, he knew that was a lie. It didn’t matter, though, she said. She’d feel safer in the cell in which she sadly closed herself. “My mother was right,” she added. “She said you people put on these polite faces, but it’s just a mask. When you get scared, you pick a target, aim and shoot.” Finally, off intel that Rachel had spotted a Whisperer near Oceanside, Michonne took off for the beach with Judith and Luke (who was eager to see Jules again). Eugene, no doubt anxious to avoid Rosita after “Ghosts,” elected to stay behind at Hilltop and help patch up the wall.

So, what did you think of Michonne and Ezekiel’s kiss? Are you feeling it? And how would you have voted on Negan’s fate? Would you have thrown him under the bus like Aaron (even after Negan saved him)? Render your verdicts below.