We fans of The Walking Dead like to think that nothing can trip up beloved badass Carol. But in Sunday’s “Ghosts,” her grief, combined with a newfound fondness for caffeine pills and a desperate need to serve Alpha her just desserts, led the heroine to stumble — so much so that, by the end of the hour, her friends were beginning to question whether she was seeing things. And she wasn’t the only one of our survivors who had a rough week. Read on, and we’ll review all of their hardships and heartaches.

‘PEANUT BUTTER, MEET JELLY’ | As “Ghosts” began, we sped through more than two days’ worth of walker onslaughts, just herd after herd lumbering up to Alexandria’s gates. Just when it seemed like the good guys might drop from exhaustion, Gamma showed up and ordered the community’s leaders to the north border for a powwow with Alpha. Before Michonne, Daryl and Carol departed with some B players, they held a heated town meeting, at which Lydia argued that the constant walker marches weren’t her mother’s doing. “If she wanted you dead, she’d send the horde — all of it, not just a few waves at a time.” So, off Michonne went, intending to comply with Alpha’s instructions to lay down her arms for their talk at the border. Carol, on the other hand, brought her gun as if she planned to fire rather than surrender it. Or maybe she just seemed extra intense because she was popping caffeine pills like they were Chiclets.

Meanwhile, since most of Alexandria’s fighters were pooped to the nth, Gabriel ordered Negan to pitch in and help Aaron break up the southern wave of walkers before it reached Alexandria. Neither of them was keen on it, but the preacher wasn’t taking no for an answer. In the field, though Negan was itching to trade his weapon — was that an actual, literal broomstick? — for a crowbar he happened upon, Aaron wouldn’t allow it despite the fact that he himself was wearing a wicked-cool mace on the end of his stump. Later, after the Saviors’ former leader used the crowbar, anyway, the fellas got into it in a big way. In backhanded fashion, Negan blamed Aaron for Eric’s death, and Aaron, in turn, suggested that he’d failed his wife. Tense as it was, Negan still warned Aaron of an approaching walker, though he wound up being blinded by hogweed growing out of the reanimated corpse. 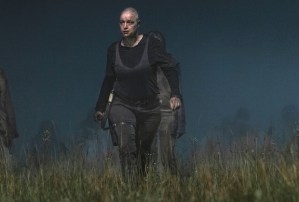 ‘WE ARE ALWAYS WATCHING’ | At the border meeting with Alpha, all of the good guys gave up their weapons except for Carol, who kept her gun hidden, just in case. At first, it seemed to go OK. Though the Whisperers’ leader knew that our heroes had crossed her border three times — in addition to the fire, once during winter and once in Season 10’s premiere — “I consider context,” she said, so “there will be no bloodshed this time.” Instead, she wanted additional land — land that would cut off the protagonists’ hunting grounds. When Carol scoffed, saying they didn’t have to listen to this bulls—, and refused to be intimidated by Alpha, the villainess brought up “the blond boy” who’d screamed his mother’s name before his beheading. At that, Carol pulled her gun and fired, missing only because Michonne intervened. Still, Alpha forgave her, mother to mother. But “this is my land now,” she added. “You better run.”

En route back to Alexandria, Daryl admitted to Michonne that Carol hadn’t been herself since she got off that fishing boat. And she wouldn’t be getting any more herself anytime soon, either, it seemed. She saw — or thought she saw — Whisperers lurking about. Since Michonne & Co. couldn’t find any, Carol’s pill-popping was called into question. Shortly, the group holed up at an abandoned school, where Carol imagined the family on the cover of a home-ec book being transformed into herself, Lizzie, Mika, Sam and Henry. (Helluva throwback, TWD!) As Carol’s turn on watch neared its conclusion, Daryl told her a story about how his trucker dad had often gone long stretches without sleeping — and had wound up hallucinating a girl in the road. Only after being haunted in the halls by Henry did Carol learn that Daryl’s father hadn’t been a truck driver at all — she was spiraling down the rabbit hole. That conversation had never happened. 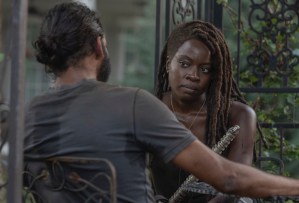 ‘YOU WERE MEAN AS A MAMA WASP OUT THERE’ | Later — and this wasn’t a dream — Carol fell into a booby trap in the gymnasium and wound up hanging upside down as at least one Whisperer and a bunch of walkers approached. She managed to cut herself down but was left with a shard of glass sticking out of her arm. So her pals rushed her to Siddiq for treatment. Only he was still having visions himself — of his experience as a nearly-beheaded prisoner of the Whisperers. Luckily, Dante was around to lend a steady hand. Meanwhile, Aaron managed to stumble into the same building as Negan. And though the show made it appear that the “reformed” baddie was contemplating whacking his companion, he actually saved him from walkers and explained what had caused his (temporary) blindness. So by morning, it appeared that Aaron had a new appreciation for Negan.

Back in Alexandria, Eugene let slip that he’d only spent the night fighting walkers alongside Rosita to protect her. “I taught you how to fight,” she noted before realizing what he really meant. “You and I are never going to happen — I need you to hear that.” And at last, it seemed to sink in, as deeply as a dagger to his heart. In what he called “a crushing moment of clarity,” he admitted that their “whole friendship [was] premised on my mistaken belief that I could someday change your mind” and get “re-zoned to love town.” Outside, Michonne, then Dante, checked on Siddiq, who looked as shell-shocked as… well, he was. As for Carol, she woke up to a decidedly Ozzie and Harriet scenario that found Daryl cooking breakfast and Henry at the table. It was, of course, a dream. When she actually went downstairs, she instead found Michonne, who remained skeptical that she’d seen any Whisperers. Did Daryl believe her? Carol later asked her bestie. And at least he did. Finally, as the episode drew to a close, we saw that among the felled walkers at the gym was one Whisperer, alive and well. He or she was masked, but unless I miss my guess, it was Gamma.

So, what did you think of “Ghosts”? Carol’s interpretation of the caffeine-pill episode of Saved by the Bell? Alpha’s unsettling willingness to forgive and let live? That amazing book jacket? Hit the comments.