Time to lay your money down, Power fans: When Ghost ultimately finds himself really in fear of losing his life, will it be Tommy or Tariq who holds James St. Patrick’s destiny in his hands?

Until this week, I would’ve said Tommy, no question. And LaKeisha’s death certainly primes Egan for retaliating first, asking questions later. But after seeing how Tasha — and by extension, Tariq — responds after Ghost roughs her up? Nobody is playing around at this late point in the game. But after so much carnage (yep, there’s another notable death tonight), can anyone really walk away a winner?

Read on for the highlights of “Scorched Earth.”

TOMMY ON A MISSION | Tommy drops Cash at his father’s house (hi, Grey’s Anatomy‘s Jesse Williams!), where we see that LaKeisha’s ex is a neck-tatted gentleman named Kadeem. Kadeem volunteers to help Tommy with any retribution he might be looking to dish out; Egan thanks him and says he’ll be in touch if he needs. “Cash gonna see you again or what?” Kadeem asks before he leaves. “I got no idea,” Tommy says.

See, Tommy’s not sure that Ghost killed his almost-fiancée, but he’s got a strong suspicion. So when Ghost calls to confirm that Tommy dropped a weapon somewhere necessary (it’s all part of their ongoing plot to take out Jason), Tommy is snippy as he says that yes, he left a gun in the specified elevator control panel. Ghost reminds him that it’s all going to be over soon. “Yeah,” Tommy sneers, “it is.” 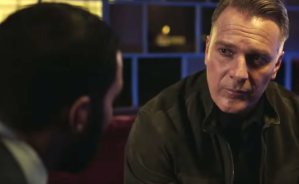 HOW DO YOU SAY ‘SEE YA!’ IN SERBIAN? | So Ghost lures Jason to an empty building — his pitch: They’ll buy the place together for the Queens Child Project, because Legit Business or some other Reason — and gets him in an elevator to the penthouse, unarmed and without one of his goons at his side. Ghost bends down to tie his shoe (and also to reach into the box to take out the gun Tommy planted), but just then, Tommy texts Jason that Ghost is going to kill him!

Jason pulls a retractable wire out of the side of his watch (side note: COOL) and nearly strangles Ghost with it. But St. Patrick manages to flip the situation, and eventually he gets the garrote around the Serbian’s neck and kills him. He brings the corpse to the roof, then sets a plan in motion that will bring Dre to the scene of the crime. And, thanks to the crooked security guard working the front desk, Ghost manages to get away free and clear.

GHOST FAILS TO USE HIS WORDS | Ghost soon learns a couple of things he doesn’t love. First, that Tasha is moving weight through her daycare. Second, that Tariq is selling drugs under his mother’s tutelage. The latter drives Ghost so insane that he reads her the riot act about putting their son in danger. “I’m making sure he doesn’t get locked up or shot,” she counters, but he’s not hearing it. He threatens to shut down her business and take Yaz for good, so she spits back that she’ll tell the Feds he killed Terry Silver. Ghost’s anger is so great that he grabs her and shoves her against the refrigerator, covering her mouth as she cries and threatens to scream. “If Tariq dies, his blood is on your hands. Your hands, ” he growls. Later, we see that he handled her so hard, he left bruises on her forearms.

The next day, thanks to a call from Ghost, Blanca Rodriguez and the Feds raid the daycare. They find nothing — Tasha figured her ex would do something like that, so she cleaned up — but the move spooks Epiphany. The stripper declares that she and her girls are done with Tasha’s business, because she’s going to get them all caught. “For real, Ghost?” Tasha bitterly says to herself after Epiphany leaves. “It’s on.” 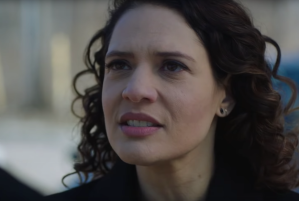 ROUND ‘EM UP! | Soon after, in Brooklyn, the Feds raid Tommy’s warehouse (thanks to a tip from Dre) and arrest his crew. Spanky and 2-Bit see Tommy narrowly avoid capture and assume he set them up… which can’t be good for anyone. Then Tommy goes to Tasha and informs her and Tariq of Keisha’s death (A+ acting there, Tasha), adding that he has no choice but to kill Ghost now. And neither Tasha nor her son make a move to stop him.

After Tommy leaves, Tariq realizes his mom offed her former best friend. “I had to protect this family!” she says, but he corrects her: Now, he’s going to protect her. On a related note: When Saxe and Blanca show up asking whether Ghost killed LaKeisha, Tasha tells them no — but he did kill Terry Silver. And then she all but draws them a full-color map to where they might find the missing lawyer’s body.

Silver is exactly where she said he’d be, stuffed into the trunk of his car in a decommissioned garage at LaGuardia Airport. Saxe also recovers Silver’s cell phone (but doesn’t tell Rodriguez); later, when Dre comes to him for help in evading capture for being framed in Jason’s murder, Saxe instructs him to plant the phone in Ghost’s hotel room so they have a direct link to the killing. Dre does.

‘DAD, WE’RE DONE’ | Tariq finds his dad at Truth later and throws his hotel access card at him, announcing that he’s never coming by again. Ghost yells at him about being a drug dealer, but Tariq calls him out on his hypocrisy and reveals that he knows he put his hands on Tasha in anger. “Stay away from me, stay away from her,” he warns his pops. “Don’t get it twisted: You might’ve given me life, but you were never my f—kin’ father.”

ELSEWHERE IN THE EPISODE | Benny confronted Tommy about killing Joe, so Tommy killed him in the hallway outside his apartment… Ramona quit Tate’s campaign and joined Walsh’s, just in time for Walsh to formally ask Ghost to be her running mate… Tate confronted Ghost, and called him by his street name, but Ghost offered up a not-so-thinly-veiled threat and told him never to bother him again… Q and Tasha kissed after he swung by the daycare, saw the bruises on her arms and told her he wanted to protect her.