Arrow‘s 2040 timeline has revealed its own Deathstroke, and beneath the marauder’s mask is the face of no less than John Diggle and Lyla Michaels’ biological son, John Jr. aka JJ. How did the apple fall so far from the tree? And is JJ truly ruthless enough to slay Mia’s brother William or any other member of Future Team Arrow — stepbrother Connor (Joseph David-Jones) included?

The second episode of Arrow‘s farewell run left us with that question, as JJ aimed to “rip the heart out” of the Unification movement by targeting its members, William (Ben Lewis) included. TVLine spoke with Chicago Fire alum Charlie Barnett, who plays grown-up JJ, about what’s to come and the blood to be spilled.

TVLINE | So, JJ is stone-cold.
He’s pretty hard, you know. He’s been through a lot.

TVLINE | Were you familiar with Arrow‘s Diggle and Lyla? And if so, were you surprised to that see JJ fell so far from noble tree?
You know, I went back and watched a lot [of previous seasons]… but … from knowing life, from knowing people, no, I’m not surprised. People who grew up in homes, they sometimes feel like they missed out on something or were given a disservice, so I’m not surprised to see him turn into a complicated or “villainous” person.

TVLINE | Connor explained to Mia that his parents had been focused on him, their adopted son, and so JJ lost out.
He definitely did. Connor was adopted and came from his own complicated situation, and that kind of weight — I’m adopted myself, so I know from experience — can be really difficult, and it manifests in very different ways for each person. As a child who maybe didn’t necessarily ask for another brother or a sister but received it and was happy to have it, to see then you kind of get “forgotten” within the fold, because of the actions of this new family member…? A twisted result can come from it.

Really, we have to remember that JJ is at this point just trying to show them that there is another side to this story, as much as people are labeling him a “villain.” As Charlie the actor playing the part, I don’t see him as a villain; I see him as being given the short end of the stick. Look at Green Arrow, who is such an interesting character because he’s not a perfect hero. He’s not Superman.

JJ at his core is trying to make a voice for the people who have been dealt a sh–ty hand or had a sh–ty situation — maybe they lost someone, due to these people. He’s just trying to make that voice heard. Now, maybe he’s doing it in a bad way…. [Laughs]

TVLINE | Speaking of that, when he threatens to have William killed, on a scale of 1 to 10, how much did he mean that?
Oh, whole-heartedly 10. He’s willing to do whatever he needs. He has been pushed and he’s been pulled for many, many years in his life. In the backstory I have in my mind, he and Connor were friends, they were brothers, and they were tight. And at some point in their adulthood, JJ started to see what he had lost out on and what Connor had gained in retrospect. Look at the fact that Connor is working with his dad so closely, and JJ was never given that opportunity. It makes his blood boil just thinking about it. 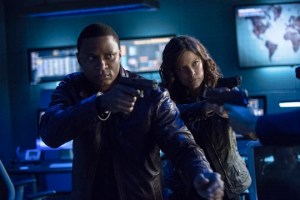 On top of that, I don’t think he knew that his father and mother were these heroes. So to grow up and learn later in life that not only are they revered as these respected people of the community, but they did all this good and they didn’t take time to do good for the one person that they created….? It’s really kind of f–ked. So from that, his anger has reached a major, major boiling point, to the point where he’s like, “I can’t even hear what you have to say. Sorrys don’t work, because all that time has been lost. I want you to feel my pain.” He is reacting from an emotional place, but he is attacking it from a technical side. His ideas are grand, but his reasoning is emotional.

TVLINE | At the end of the day, if there has to be a “final showdown” between Deathstroke and somebody, will it be with Connor… or Mia? Or both?
Oooh, good question…. I mean, thank you for assuming I am badass enough to take them both on. I will say that yes, everything has to be faced. All of the knots have to be untied. When that is, I can’t even tell you that I know. But these are deep complications whenever you’re talking about family matters, and it’s usually pretty twisted with emotions. These are the kind of problems that perhaps won’t be solved with one fight or with one person winning. And on top of that, it will be so difficult for anyone to live with, if it comes to a place of having to kill one another…. How do you go on living with that? I’m excited as an audience member to see where it does go.

TVLINE | I saw Kat [McNamara] and Juliana [Harkavy] tweeting about production starting on the spinoff’s backdoor pilot. Are you a part of that?
Oh yeah. 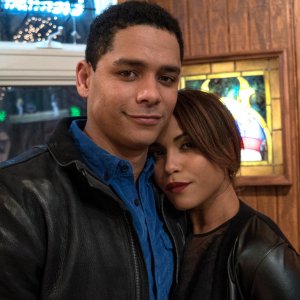 TVLINE | Chicago Fire showrunner Derek Haas once told us he hoped to have you back one day. [Barnett played Peter Mills for the first three seasons of the NBC drama.] Has there been any talk of a guest spot?
Tell him to call me! [Laughs] I should give him a call. They’re doing great over there, the numbers are sticking up there.

TVLINE | Dawson and Casey are now split up, and when you left, Mills told Dawson to look him up if anything changes. Could they maybe now be together? [Monica Raymund last appeared as Dawson in last season’s premiere.]
Look, I’ve known Monica since I was 13, 12 years old, strangely enough, so she’s more like a sister to me, even though we had to make out on TV. [Laughs] I love her to death and we have joked about building our own little Chicago spinoff, where Dawson and Mills find their way to Puerto Rico and start their own firehouse down there.