That’s the gist of Katherine’s mindset in this week’s A Million Little Things. The emotionally conflicted lawyer wants to relocate with her (formerly) cheating husband and son and make a fresh start in Texas… but she knows she can’t, because Eddie has vowed to be an integral part of his infant daughter’s Massachusetts-based life.

What’s a bummed-out lawyer to do? How about a little role play and closet sex?

In other less-than-ideal couples news, Maggie and Eric continue to grow closer, and Gary continues to grow suspicious of them. Read on for the highlights of “Austin.”

HEADING WEST? | When a question about woolly mammoths and pterodactyls comes up during Theo’s bedtime, Katherine asks Eddie to fetch her iPad and look up the correct answer. But what he sees causes an Ice Age in his belly: Her browser displays searches for law jobs and homes for sale in Austin, Texas. Eddie is supremely bothered by the idea of his wife moving to the Lone Star State, but he says nothing.

Correction: He says nothing to her. But he spills all of his worries to Gary and Rome while visiting Rome’s Lexus commercial shoot. “You’ve gotta talk to her about this!” Rome urges his friend. “Or, produce a commercial about the exact situation you’re not talking about, then have her visit the set,” Gary snarks. He’s referring to how Rome did precisely that with Gina, who did not know until she arrived on set that he’d rewritten the car ad so it featured a married couple who discussed their reproductive change of heart while sitting in a dealership. 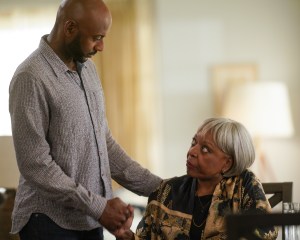 “How could you not run that by me?” Gina later asks, still angry but holding it down so she and Rome can have a celebratory anniversary lunch with his parents at Someday. To mark 50 years together, Rome’s father gives his mother the Alaskan cruise she’s always wanted… but he’s so negative about the whole thing that they fight and he leaves.

Papa Howard eventually apologizes in grand fashion — and wearing the dress uniform in which Mama Howard first fell in love with him, no less — but the whole incident makes Regina think. After Rome apologizes for the commercial, she says she wants to have a long marriage with him, but “I don’t want you to resent me, and I don’t want to resent you.” The solution, they both agree, is that they have to talk. 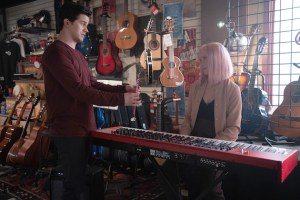 A MINOR KEY | If that sounds familiar, it’s because it’s the advice Gary dished out earlier… and could stand to apply to his own relationship. Maggie skips out on their breast-cancer-survivor support group, saying she’s got to stage her apartment with Delilah so they can get someone in there. But the other women at the group tell Gary what he already knows: Maggie just doesn’t want to be there, and she’s figuring out her own way through the complicated emotions that surviving a fatal disease can bring up. “She wants to move on,” one woman tells him.

Meanwhile, Maggie does stage the apartment with D, but that turns into talking about Chad’s heart, and that turns into her walking into Eric’s music shop and sobbing so hard about missing her brother that Eric immediately takes her into his arms.

When she’s calmed, she tells him about her love for playing the piano but admits she hasn’t played since she got sick. He encourages her to go to an open mic night at a local piano bar, and even volunteers to sit in the front row “so you don’t get stage fright,” the way Chad used to when she was growing up. We also learn that Eric doesn’t play an instrument, and he took over the shop — which belonged to his fiancée, Chloe — after she died.

Gary and Maggie do connect at home, later, but things are weird between them. “I want you to tell me what’s going on. Are we OK?” he asks, adding that she feels “very far away.” He says he wants to help her figure out who she is without cancer, but she gently turns him down, saying, “I love you. This is something I need to do myself.”

Later, some tricky camera work makes us think Maggie is performing Pete Townshend’s “Let My Love Open the Door” at the piano bar, with Eric up front as promised — something that seems to irk Gary when he shows up after seeing an event flier that Maggie left in their kitchen. (He also found the folder of Maggie’s funeral instructions, leftover from her illness, which she’d reviewed earlier before tossing in the trash.) But Mags is actually playing for herself, in her old apartment (with some dramatic lighting): She never went to the club. 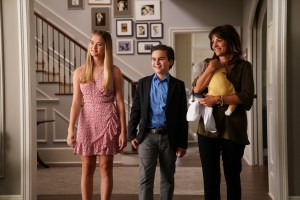 PICTURE IMPERFECT | Over at the Dixon household, Delilah calls the family photographer (hi, Spin City and pretty much every other show’s Richard Kind!) and asks him to take a new shot of them for Charlotte’s birth announcement. The photographer doesn’t know Jon died, and he takes the news hard. But he shows up… just in time for Danny to decide that he doesn’t want to be part of a new family shot that doesn’t include Jon. Eventually, Delilah summons all of their friends — and Gary’s dog, Colin — and they take a big group shot of their family, which she uses on the cards.

GET READY FOR LIFTOFF | But what about Katherine and Texas? When Eddie confronts her about what he saw on the iPad, she immediately cops to thinking about a cross-country move. She wants to give their relationship a go somewhere that not everyone knows about their marital woes. But she also knows that he can’t and won’t leave Charlotte behind, so she’s resigned herself to staying put.

As a consolation prize, Eddie takes her to attend an open house at the home across the street from theirs. (Side note: Yes, really.) While there, they pretend to be “Edward,” an astronaut, and “Kat.” They spin yarns about their life to the unsuspecting realtor. And when the agent goes downstairs for a few minutes, Kat gets Edward’s rocket to blast off in the master bedroom’s walk-in closet.

Back at home, Eddie walks Katherine to her bedroom door, kisses her goodnight and tells her he loves her. Then, although he clearly doesn’t want to, he goes to sleep in another room.