As anyone who’s read Stephen King’s Misery or seen its film adaptation is aware, Annie Wilkes will not brook profanity in any form, from anyone.

It’s one of the delusional murderess’ more admirable qualities.

So when Masters of Sex‘s Lizzy Caplan took on the well-known role for Season 2 of Hulu’s Castle Rock, she tells TVLine, she found herself really getting into Annie’s scrubbed-clean vernacular.

“It was one of the most enticing parts of it, to get to play Annie Wilkes, saying things like ‘cockadoodie’ and ‘dirty birds,'” Caplan says, chuckling. Her personal favorite? “Paper fakes.” 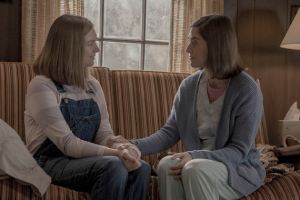 She’ll have plenty of opportunity to use it. Castle Rock‘s return will focus on Misery‘s Annie — years before the events of the book/movie but still quite unbalanced — as she and her teen daughter, Joy (Eighth Grade‘s Elsie Fisher), find themselves taking an unplanned pit stop in the titular town. (In contrast, the anthology series’ first season had its strongest ties to King’s novella Rita Hayworth and Shawshank Redemption.)

And just in case a deranged nurse with a penchant for pain isn’t scary enough, this season also will chronicle Castle Rock’s ongoing clan war with racist undertones. Oh, and did we mention the plot also mixes in elements from King’s Salem’s Lot, a novel about vampires?

The season’s 10 episodes run Caplan’s Annie through the emotional gamut, frequently putting the out-of-control character on really shaky footing… sometimes literally. Which brings us to something we’ve obsessed over since screening the season premiere: Caplan’s take on Annie’s very noticeable signature walk.

“I should formulate some go-to that makes it seem like I went to some movement coach to cultivate this walk, but the truth is, I knew that [Annie] couldn’t walk like I walk in my normal life,” she says, laughing. “I find with taking on a new character, especially one that is very unlike me, that the physicality is a good way in.”

But how to reconcile the descriptions of Annie in the novel, where she’s described as large and formidable, with Caplan’s slight physique? “There’s a line in the book that having a conversation with Annie Wilkes is like listening to a song somewhat out of key,” the actress says. “She’s a little off, so I wanted to incorporate that. If it couldn’t feel physically terrifying, I wanted it to feel unsettling.”