This week on The CW’s Arrow, Oliver ran into multiple familiar faces during his latest mission for The Monitor, while Laurel struggled to accept the fact that her Earth-Two home had been erased from existence.

Waking up in a strange place following the Earth-Two escapade, Oliver was not-so-warmly greeted by the Monitor, who confirmed that Laurel’s home had been erased from existence. The cosmic being also chastised Mr. Queen for getting involved in Tommy’s business as well as altering Laurel’s own future, by bringing her through the breach. Oliver explains, he had already seen one Laurel die, he couldn’t go through it again with her doppelganger.

Tasked with locating a Dr. Robert Wong, Oliver bumps into Diggle, and they then fight their way down a hallway filled with goons — getting an assist with the final one, from Laurel. The three of them then step outside and realize they are in Hong Kong, site of Oliver’s Season 3 adventures. Oliver updated Laurel on Earth-Two’s demise, but she refuses to accept it, and even grabs the temporal extrapolator (breach device) to rush home and help any survivors. ‘Cept, the gizmo won’t work. After angrily accusing Oliver of not caring about the “copies” of his loved ones who lived on Earth-Two, and reminding of those she possibly lost (sister Sara included), Laurel breaks away from the boys to get the breach device fixed.

Oliver and Diggle head to an Internet cafe, where Dig uses Lyla’s ARGUS code name (“Harbinger”) to gain them access to a secret suite. Once Oliver gets a lead on Wong, goons swarm the place to keep the Americans from leaving. The boys fantastically fight their way out, with Tatsu crashing through the window at the end to run through the last two with her swords. 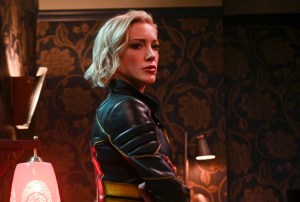 Meanwhile, Laurel is trying to break into the place where her tech-savvy “old friend” works when Lyla shows up to offer backup. After sneaking in through the back and then whaling on some guards, Laurel asks David Chen, someone she met during her time with Cayden James, to fix the breach device. But as David and she eventually realize, it is working just fine — it simply can’t open a portal to an Earth that no longer exists!

Oliver brings Tatsu up to speed on the Monitor (whom she had heard of, through the Crescent Order) and the looming Crisis. They then get a bead on the safe house where Dr. Wong has been stowed, and race there to meet him. But just as they arrive, so do some baddies on motorcycles, and a chase through the sidewalks of Hong Kong ensues — during which Oliver comes face to face with… China White! Fisticuffs follow, and China White eventually slips away after using a smoke bomb.

Following a paper trail that showed where Wong had some equipment delivered, Oliver breaches the “impenetrable” garrison, where he discovers that Wong had been tasked with recreating the Alpha Omega virus. Following much debate with Tatsu and rehashing of the similar road they traveled once before, Oliver sets out to trade the virus to China White for Wong, while Dig and Tatsu keep a watch out. China insists on having the virus and confirming it as real first, at which point she has Wong released from a vehicle… with a bomb strapped to his chest; she will deactivate once she and her crew have gotten away safely. Oliver, though, has other plans, and Tatsu swings onto the scene while Diggle works a long gun. But when someone makes a run for it with the virus, Diggle gives chases, getting into a pretty grand slugfest with the guy, until Lyla ends the clash with a couple of bullets. “Hi, honey.”

Oliver meanwhile bests a couple of baddies himself, before getting his hands on Wong. Now it’s just a matter of Tatsu getting the detonator from China White. But first, the ladies have an epic fight of their own, alongside the water, katana versus dagger. Tatsu gains the upper hand but refuses to run through her opponent, leaving China White opportunity to flick a dagger into Tatsu’s torso. Tatsu shuts down the bomb vest before doubling over on the dock. China White then goes for the kill but is knocked into the harbor by Laurel’s sonic cry.

With Wong safe in ARGUS custody, the virus secure and Tatsu on the mend, Oliver announces to the team that he is not going to blindly do the Monitor’s bidding and turn over the chemist, but instead head to ancient Nanda Parbat to hopefully get some answers about the cosmic being. And if he doesn’t like what he hears, they’ll find another means to stop the Crisis. But in the closing scene, we discover that Oliver is not the only one in contact with the Monitor. (Think back to what Lyla told Laurel earlier about her tragic op Afghanistan, after which she prayed to “any god she thought might be listening” and how that turned out “not exactly” as she had planned.) 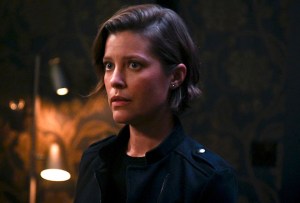 Cut to a Hong Kong alleyway, later that night….

“You should have told me what was going to happen on Earth-Two; John was there,” Lyla says to the Monitor.

“The destruction of that Earth was a necessary sacrifice,” he explains, noting that “countless more will perish if we do not ensure Oliver Queen is prepared for what is coming.”

He then asks, “Were you successful?” Lyla answers, “Yes, I have Dr. Wong.”

“Let us proceed…,” says the Monitor.

* During a quiet moment, Laurel opened up to Lyla about all that she has lost, asking how she can possibly “move forward” when everyone she ever loved is now gone. “By not giving up, by doing the right thing,” Lyla answered. “We honor the dead by fighting for the living.” After all, “This world needs you, too.” (As does, you know, the spinoff.)

* Another great scene: Tatsu asking Oliver why he has been doing everything the Monitor asks. “Because if I’m wrong, all this is for nothing. I left Felicity, I left my children…. All of these things that I sacrificed… will have been for nothing. I need my family to live. Which means I need this to work.”

* Meanwhile in 2040, we learned that JJ, son of “saints” John and Lyla, ended up the way he did because Connor required more of their attention, as the son of Bronze Tiger whom they adopted. We heard from JJ a tale of how he once warned Connor to not run drugs for a local gang, but the lad didn’t listen and as a result, it was JJ who got grounded, since Dig held him responsible for his brother. Connor appealed to JJ that it’s “not too late” for him to change course and do the right thing, that he needn’t cover up who he really is with a mask. But JJ then detailed how he led Connor, Zoe and Mia into a trap, by luring them to a shady bar for a meet-up — all while William was left unguarded at the bunker.

“Why cripple the system when you can rip its heart out?” asked JJ. “Once the Unification movement is gone, that vacuum is ours to fill.” Mia threatened JJ, but he waved her off, else the team he has storming the bunker will whack her brother. With that bold play and grave threat made, JJ told Connor. “You were wrong about me — it was never a mask.”

What did you think about “Welcome to Hong Kong”?