Alexis Denisof (Angel) made his long-awaited debut as Headmaster Vardemus on this week’s Legacies, and while we won’t deny the sorcerer’s ability to rally a crowd, we’re not ready to trust him just yet.

Our suspicions about the Salvatore School’s shady new leader intensified in the final moments of Thursday’s episode when he invited Josie to participate in a brand-new curriculum designed for advanced students — a reward after catching her giving one of her classmates a magical bloody nose.

“I like that a visually outrageous and extroverted character like Vardemus has gravitated towards the more silent-but-deadly Josie,” Denisof tells TVLine. “They have a really interesting dynamic together. She brings out a different aspect of him, and in turn, he brings out some new colors in her character.”

Denisof describes Vardemus and Josie’s involvement as “an interesting line between a connection being made and a bigger story unfolding. Sometimes those will be in agreement, and sometimes in contention.” (Sounds mysterious!)

Below, Legacies‘ new addition answers more of our questions about his character, including how he really feels about Alaric Saltzman:

TVLINE | I have to start with a confession: I spent years thinking you were actually British before someone finally set me straight.
[Laughs] When people meet me, they’re often surprised, or slightly disappointed. They’re expecting Wesley.

TVLINE | I was certainly expecting more of a Wesley vibe with this character, but you’ve managed to craft an entirely different accent. How did you settle on what he would sound like?
I had some fantastic direction to start with, in terms of the character description and the details in the script. I found myself going back and watching older ’50s and ’60s British interviews, particularly with people like Laurence Olivier and Peter O’Toole, trying to channel that generation of accent that isn’t around as much anymore. It’s a little more period, but not so period that it feels too specific. I wanted him to feel like he came from a very different place and time. 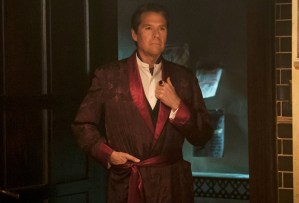 TVLINE | He also seems to place a lot of emphasis on appearances.
I think that’s more about him having confidence. And it fits into the way he wants his students to live. He wants them to be confident in themselves, enough to influence the world to their advantage. He has no qualms about that. It’s important that you come to terms with your full self, your full power, and that you use it appropriately.

TVLINE | And how does he feel about the Salvatore School’s former headmaster?
While he has a modicum of respect for the efforts that Alaric made in holding the school together and fighting the various monsters off, that’s a small part of how he feels. There’s more conflict there than there is agreement about style, content and curriculum. That conflict of opinion and essential belief about how the kids should behave and operate and learn to use their powers. It’s great material for their relationship. There’s a lot of fun and teasing. It’s great when characters can enjoy their disagreements with each other.

TVLINE | We’ve seen pictures of Vardemus refereeing the school’s annual football game. That’s quite a look he’s got going on. Is he the sporting type?
In his own way of speaking, he is, but not by the definition of American football. I’d say he’s very much a fish out of water in that sense. He takes a very different approach to how they should play that game.

Your thoughts on Vardemus thus far? Drop ’em in a comment below.