If you read nothing more than the start of this recap of Thursday’s A Million Little Things, know that the scene pictured above a) did happen, b) was not part of a dream sequence and c) involved a shirtless duet of Bruno Mars’ “Count on Me,” accompanied by ukulele.

What more do you need to learn about the episode, really? Oh, well perhaps we should discuss how we finally know what the deal is with Eric and why Maggie’s mom is obsessed with him — and some of you guessed it right away, so allow me to treat you to a family-style meal at Someday! (Just kidding: EVERYONE gets a family-style meal at Sunday in the episode, thanks to an ill-timed power outage and Regina’s longing for her restaurant days of yore.)

Read on for the highlights of “The Perfect Storm.”

A BOMB DROPPED OVER BAGELS | No one is happy at breakfast at Gary and Maggie’s, though Gary, Patricia and Eric gamely try to make conversation around the table while Maggie sulks. We learn that Eric owns a guitar store on Beacon Hill, but that’s about as far as we get before Mags blurts, “If it’s not too much trouble, could you tell us the story of how you started dating my mother?” Both Patricia and Eric immediately deny that they’re romantically involved, but when the truth comes out, Maggie probably wishes they were: Eric was the recipient of Chad’s heart, which was harvested at the hospital the night he died.

The reason this is such a big deal? Patricia had told Maggie and her dad that Chad died at the scene of the accident, when in reality she’d been with him for a few minutes while he was alive — though barely, and not conscious — and had been in the room while he passed away.

Maggie is incensed that her mom hid this from the rest of the family, but Patricia counters 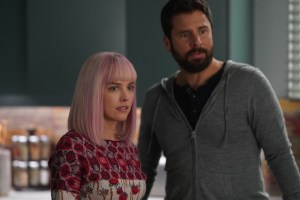 that she had a good reason. “I didn’t want you to regret missing the chance to say goodbye. I didn’t want you to know he had suffered,” she says, crying. But the tears don’t work on her daughter, who’s just getting started. “The last six years, I’ve been walking around with a story that’s not even true,” Maggie says, unwilling to hear her mom’s pleas to understand how knowing Eric has brought her some comfort. Then Maggie breaks down and walks out into the pouring rain. Gary tries to follow her, but she tells him she needs to be alone.

Back inside, Gary deduces that Patricia’s lie was the reason Gary’s dad left her — and not the other way around, as she’d led them to believe. “Coming here was a mistake,” Eric mutters, and promptly leaves. Smart guy.

On his way home, Eric drives by a soaked Maggie and tells her to get in the car. They wind up at a bar, where we find out that he was engaged to a woman named Chloe, but that she was killed in the same motorcycle accident that left him needing a new heart. He can’t talk about it without crying, and the whole thing is quite sad. Then, Eric gets a text from Patricia: She’s leaving town.

MRS. BLOOM, OUT! | Eric drives Maggie to the airport and tells her he’ll wait at the curb while she finds her mom. (Side note: Having once been verbally flayed by a Boston cop for doing exactly that, I would advise against it, but you do you, man.) She finds Patricia there, having just been dropped off by Gary, who also is curbside. (Playing with fire, boys!) The two women are tentative with each other… until Patricia lets it slip that she’d really been in town the last time to meet Eric — and not solely for the purpose of seeing Maggie through her surgery. “God, I knew Chad was your favorite, even when I was a kid,” Maggie says, eyes full of angry tears. “You know what? Chad is dead, and I am here, and you are still choosing him over me.” 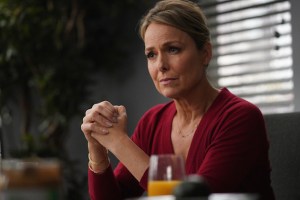 She walks away and winds up getting a comforting hug from Eric, though they break apart when she notices Gary watching from a short distance away. On the way home in the car with Gary, he lets her know he’s there if she wants to talk. And although she thanks him, she says she’s not ready.

KILLING KATHERINE SOFTLY | Thanks to a last-minute change in Katherine’s schedule — and against her better judgment — Katherine winds up accompanying Eddie and Theo to Delilah’s to deliver Charlotte’s gift before school. Rome is at the house, too; he’s going to watch the baby while Delilah goes back to work at the restaurant. It’s all kinds of awkward while everyone is there. Eddie feels bad about not being more of a dad to his infant daughter. Delilah feels guilty for shtupping the husband of the woman standing in her kitchen. Rome just feels extra Rome-y as he babbles in a failed attempt to lighten the mood. And Katherine? She’s reduced to tears while watching Theo play “Count on Me” to his half-sister (though remember, he doesn’t know that… yet) in the nursery. When Delilah tries to make things better, Katherine doesn’t want to hear it. “Don’t pretend you have any idea what I’m going through,” she spits.

After everyone leaves, and the power goes out, Eddie gets frustrated because he and Rome can’t get Charlie to stop crying. He sees it as a direct result of his not having been there for Theo in the beginning, and therefore not really knowing what to do. But eventually he guesses that her little nasal passages are congested, and he’s got a solution for that! And that’s why he and Rome wind up in the steam shower — “Unless you want to use the snot sucker!” Eddie yells at Rome, who is horrified by the notion, and HOW DARE YOU IMPUGN MY BELOVED NOSE FRIDA, which was sometimes the only thing standing between myself and complete insanity when my daughter was a baby? Anyway, the warm, humid air eases the baby’s breathing woes, and eventually the guys get so warm that they take off their shirts and decide to have a little “Count on Me” singalong of their own. Sophie eventually catches them crooning by candlelight and snaps a photo to mark the occasion. “We’re wearing pants!” Eddie cries as she leaves the room, chuckling.

WHEN YOU’RE HERE, YOU’RE FAMILY | When the lights go off at the restaurant, Regina freaks: She just bought a huge shipment of food, and it’s all going to go bad. But a construction worker who ducks into the restaurant makes her rethink things: She feeds him, and pretty much everyone else who wanders into the place to dry out. Pretty soon there are so many people that everyone’s sitting family-style and eating whatever’s placed in front of them, and everyone — including Regina and Delilah, who’d squabbled a bit earlier in the hour — is happy. Awesome guys. But, um, is anyone going to pay for their meal? Like, maybe send around a “pay what you can” bowl? Regina just took out a line of credit on her house. Anything?!

The electricity is restored as Katherine meets everyone at Someday. And having been bucked up by her assistant, Carter (who Yoda’d her into making her marriage work instead of just “trying” to), she announces that everyone needs to stop being weird around her. The mood gets a bit more normal after that. Katherine gives Delilah the papers that will allow her to keep her house, and then she holds hands with Eddie. Hey — it’s a start.

Meanwhile, Gary sees a text on Maggie’s phone and gets upset (though says nothing) about why she’s not able to confide in him the way she apparently did with Eric, who urges her to call him if she ever wants to talk again.