This week’s The Masked Singer brought something into focus for me for the first time: Do Black Widow and Butterfly have really similar face masks, or what?

Is it a clue? A nod to some connection between the two performers underneath all of the sparkly spandex and foam antennae? A secret message that we must somehow decode? Or maybe it’s just that bug heads don’t look all that different, when you really think about it, and MAN does this show make you overthink things, eh?

Anyway, here’s how it all shook out: 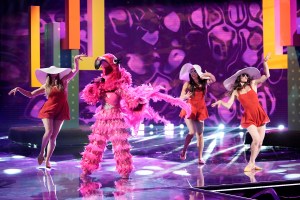 FLAMINGO | The big pink bird mixed her animal metaphors by telling us in her clue package that she was a “hood rat” who became a “Hollywood triple threat.” That certainly was evident in her performance of Kenny Loggins’ “Footloose,” which was as energetic as it was vocally flawless. You can’t convince me that she’s not the person I think she is which is… (My guess: Former 3LW member/The Real co-host Adrienne Bailon.)

LEOPARD | Sean Mendes’ “Stitches” was Leopard’s song this week, which showed off the lower end of his register. Clues in his video insinuated that he was either adopted or a foster child — (“I wasn’t born a winner,” and “I was passed from pack to pack,” he said) — which just reinforces my belief that the cat is really a Seal. (My guess: Seal — who spent time with a foster family when he was a child.

BLACK WIDOW | Knitting, some kind of platinum (?) record and a peach figured prominently in Black Widow’s pre-performance package, as did the bug’s insistence that she’s not as “squeaky-clean” as her public image would have people believe. She absolutely slayed Carrie Underwood’s “Before He Cheats” — even with her left arm in a sling throughout the performance. (My guess: Raven’s Home‘s Raven-Symoné.) 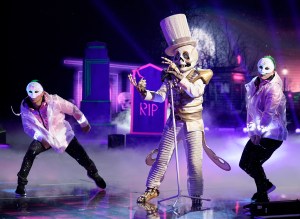 SKELETON | I was so sure Skeleton was Dan Aykroyd, but the more I think about all the silly crooning Paul Shaffer used to do when he was David Letterman’s sidekick, the more I think that the former Late Show band leader is sporting the bonesuit this season. And my opinion didn’t change during his entertaining (though not particularly virtuosic) rendition of Jet’s “Are You Gonna Be My Girl?”

THINGAMAJIG | Thingamajig’s number this week was Kacey Musgraves’ “Rainbow,” which was sung in such an easy manner and with such gorgeous tone that I would think he’s a singer… though his clue package seemed to indicate that he was maybe a sports player. Or maybe a magician? (My guess: I got nothing.) 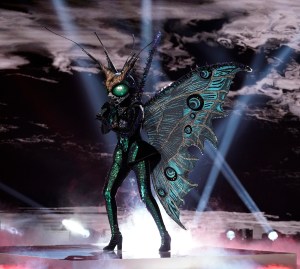 BUTTERFLY | “At the height of my career, I had everyone saying my name,” Butterfly said at the top of her video, and OH COME ON WHY DIDN’T YOU JUST SAY “I’M MICHELLE WILLIAMS OF DESTINY’S CHILD?!” Oh, and she sang Bon Jovi’s “Livin’ on a Prayer.” (My guess: Michelle Williams of Destiny’s Child.)

THE UNMASKING | Skeleton was unmasked, and was revealed to be Shaffer! (Read an exit interview with The Bony One here.)