If we were Power‘s Tasha, we’d seriously consider investing in a good pair of sneakers. Because when Tommy finds out who’s responsible for the grisly death of his girlfriend LaKeisha? Girlfriend better run.

“I think it’s going to take a while for Tasha to even digest that she killed LaKeisha,” Naturi Naughton tells TVLine, referring to Sunday’s bombshell of an episode. “But once she does, she’s going to immediately have to go into protective mode to protect herself.”

In the final moments of “Deal With the Devil,” Naughton’s Tasha arrived at LaKeisha and Tommy’s new home in the suburbs and discovered that her former friend was cooperating with law enforcement authorities. Realizing what that meant — i.e. jail (or worse) for pretty much every one of the St. Patricks — Tasha tried to stop Keisha from leaving. And when Keisha’s gun came into play, the women’s scuffle eventually turned deadly. By the end, Tasha put a bullet in her former bestie’s head and then fled. When Tommy came home with an engagement ring in his pocket, he saw that his ride-or-die was dead. (Check out a full recap here.)

Read on for Naughton’s thoughts on what’s ahead — including a tease that has us equally pumped for/scared about the midseason finale.

TVLINE | While watching the scene, it seemed that Tasha didn’t show up there thinking, ‘I’m going to kill her.’ She just wanted to shut down the cooperation with the police, consult with Tommy and all that. When do you think she knows that she’s got to kill Keisha in order to keep her family safe?
Yeah. Exactly. It’s so good that people realize that that was never Tasha’s intention. She never went there with that frame of mind. The turning point, I believe, was when Keisha started looking at her purse and knowing that there was a gun in there. She made the first move, honestly. I hate to say it! But [LaKeisha] brought this on herself, because she did not have to make a run for the gun. She did not have to try to fight me. In the midst of the whole fight scene, when the gun in the purse became a thing, that’s when I think Tasha realized she’s fighting for her life and her family’s safety.

Tasha’s not one to mess with when it comes to her family… At the very end, when she had already shot her, after they both were struggling for the gun, she knew that she couldn’t leave her alive. She knew that Keisha would talk and say what happened. So, the only option at that point was to kill her, or else everything would’ve been completely blown up in Tasha’s face. It was the hardest thing I think she’s ever had to do. All this stuff with Ghost and the divorce and even Tariq, all that is different, because you get to wake up the next morning. But LaKeisha is not going to wake up the next morning, and I think that was really, really heartbreaking for [Tasha].

TVLINE | This show has made me so paranoid about a tiny piece of evidence being left behind. So when she’s running out of there, I’m like, ‘Tasha, your fingerprints are everywhere! Your car was in the driveway for a long time!”
[Laughs] I know. 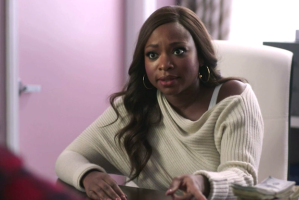 TVLINE | Moving forward, should we be worried about what that might mean? Because this wasn’t premeditated, and she was not careful about it.
No. That’s why she wasn’t careful, because if she had gone there to kill her, she would’ve worn gloves. She would’ve had on a specific kind of wardrobe to make sure nothing fell, or her hair would not have been out. She would’ve made sure that there was no evidence of her being there, but she thought she was going to go have a talk and shut it down, You should always be worried about evidence popping up. This is what the world of Power is all about: unpredictable things happening and evidence that comes back to bite you. It could be, you know, months later that something is revealed. So I’m worried, because Tommy is not going to just accept that LaKeisha was just killed in an armed robbery or a break-in. This is personal, and I’m nervous for myself, my character. People on Instagram have been already figuring out something that [Tasha] left behind. Everybody’s speculating if Tasha’s going to get found out for the murder of LaKeisha. [Laughs] So I’m a little nervous, myself.

TVLINE | How soon after all of that happens do you think Tasha starts to consider her next steps?
In the next episode, you’ll start to see how Tasha has to figure out, OK, if this comes back to bite her, what’s her alibi? What is she going say to explain herself? Was it self-defense? All those things are going start kind of going through her mind. But right now, the only thing that she can think about is the fact that, “Oh my gosh, I’ve just killed my best friend. And I didn’t want to, nor did I intend to.”