Ten Voice contestants marched into the Battles Tuesday night; only six came out still a part of the show. Did any of your favorites from the Blind Auditions get the chop? And did any of the coaches make any more of those decisions that leave you torn between saying “Huh?” and “Hmmph!”? Read on, and we’ll go over each sing-off.

Team Kelly: Alex Guthrie (Grade: C-) defeated Injoy Fountain (Grade: B) on “Home” | In rehearsal, Kelly informed us that she’d paired Injoy and Alex because they are both “soulful singers.” Which I guess is as good a reason as any? When they grabbed their respective mics… well, I can’t say that Injoy mopped the floor with Alex, exactly, but there was definitely at least some sweeping going on up there. Alex is clearly a good singer — that lower register! — but he struggled a little with his big notes and, as John noted, didn’t put forth a whole lotta personality, which his opponent had in excess. Not only was she vocally “slappin’ the song around” more than Alex, to borrow a phrase from Blake, but she looked as confident and at-home on stage as I do in front of a fourth glass of wine. Kelly’s decision was a total head-scratcher. 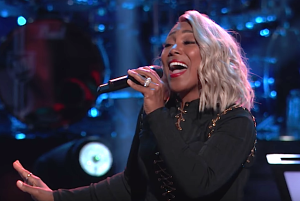 Team Gwen: Myracle Holloway (Grade: B-) defeated Elise Azkoul (Grade: C) on “Breathin'” | During rehearsal with advisor will.i.am, Gwen warned her team members that when they harmonized too much, she lost their individual personalities. I didn’t have high hopes for Elise regardless; since her Blind, she’d seemed like cannon fodder to me. Plus, the show spent a lot more time on Myracle’s harrowing backstory than Elise’s. On stage, the competitors started off sounding fairly evenly matched, but there was so much more emotion in Myracle’s voice that she had an edge that was sharp enough to cut yourself on. As the Ariana Grande cover went on, Elise sounded more and more like a karaoke-night superstar to me, while Myracle sounded like a real, actual singer. Her voice “doesn’t sound like Mary J. Blige,” said Kelly, “it feels like Mary J. Blige.”

Team Legend: Katie Kadan (Grade: A) defeated Destiny Rayne (Grade: B) on “Tiny Dancer” — Destiny stolen by Gwen | In rehearsal, Katie reminded me why I love her so dearly, besides her kickass voice, by accidentally rapping at advisor Usher and worrying that staring too deeply into her crush’s eyes would seem a mite “creeper.” Then, she unleashed that voice and holy, holy crap — it was like my ears were opening wider than they knew they could to take in more magnificent sound than they ever had. In the moment of truth, Destiny acquitted herself nicely — better than I expected, honestly; she has some ferocity to her. But c’mon, this wasn’t a contest. Katie has a voice and a half — she makes my marrow vibrate from the power of her vocal (and my marrow is seriously reluctant to vibrate!). As Gwen put it, it’s hard to believe that Katie’s is a real voice. Add to that her personality plus, and forget it. This was an absolute no-brainer. Give Katie the title already. (In fact, I just predicted she’d ultimately get it!) 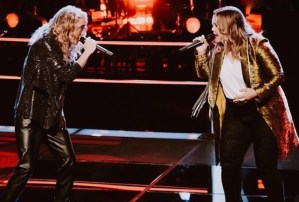 And, given short shrift in an ultra-brief montage, Team Legend’s Max Boyle defeated Matt New on “Let Me Love You,” and Team Blake’s Cali Wilson defeated EllieMae on “Miss Me More.” It almost goes without saying, but wouldn’t we have preferred to see these Battles in full — or even a little bit more than we did? — than watch Gwen talk about the importance of warbrobe on stage? I mean, the show is called The Voice, not The Outfit.

So, anyone you were crushed to lose Tuesday? Who was the night’s standout? Vote in the poll below, then hit the comments.