NBC’s #OneChicago franchise is taking on its scariest, nastiest threat yet: a deadly bacteria that wreaks havoc on the Windy City in this Wednesday’s mega crossover between Chicago Fire, Chicago Med and Chicago P.D.

For the first responders, “there’s real terror about what’s going on,” says Fire showrunner Derek Haas, who came up with the idea for the three-hour event with über producer Dick Wolf. “[When] you’re trained to fight fires, you know what you’re dealing with for the most part. You have the right equipment on to deal with temperatures and those things. What you’re not thinking about is microbes. It’s the War of the Worlds kind of scenario — germs, bacteria. So that’s terrifying, and especially seeing how fast it can affect people. This is a biological agent that, within 24 hours, can take someone out. So that’s horrifying.”

It’s no surprise then that while reading the script, Med star Torrey DeVitto says her reaction was, “‘Oh, my gosh, it’s the zombie apocalypse!'”

Below, the casts and EPs preview what to expect from the “Infection” action: 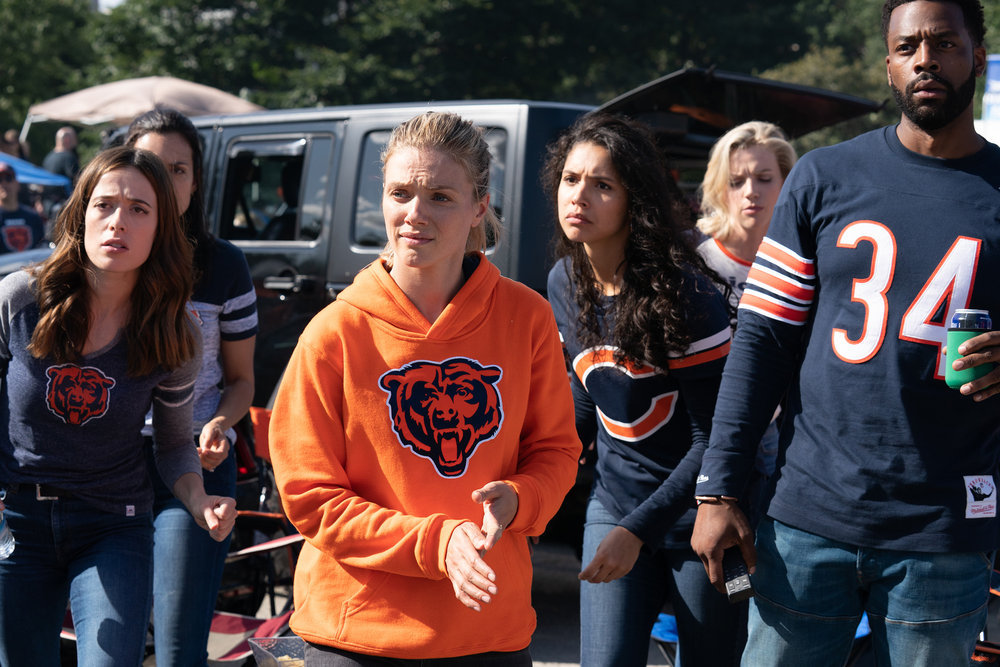 ONE BIG FAMILY | “I think specifically in this crossover more than any other, there is a melding of characters more so than ever,” says Joe Minoso, who plays Fire rescue squad member Cruz. “It’s going to feel more like a movie. And I think you’re going to find yourself not knowing when you’re watching Fire, or when you’re watching P.D., or when you’re watching Med, because we’re just all going to be there the whole time. And I think you’re going to be surprised, really, at how effective we’ve become at this.” In keeping with the cross-show pollinating, “you’ll see Cruz actually hanging out with Upton,” Minoso shares. “We kind of go off together to try and take care of something that I can’t give away.” Meanwhile, Med doc Will Halstead will get to channel his cop brother. “I was able to do some tactical P.D. stuff,” his portrayer Nick Gehlfuss shares. “That feels like a crossover to me, when I’m able to go into their world and do what they do in their world.”

WINDY CITY ICONS | When the event kicks off, viewers will hear the familiar voice of Sunday Night Football announcer Al Michaels as the Fire, Med and P.D. teams enjoy some rare non-work fun. “We start off with a classic Chicago Bears tailgating scenario,” Fire leading man Jesse Spencer previews. But when a man collapses at the game, things quickly take a turn, leading to a haunting image involving another Chicago landmark. “We kind of thought in terms of set pieces for each hour, what we could do to be different, and things we hadn’t done before,” Haas describes. “One of the original ideas was: What would it look like if Michigan Avenue were empty of people? How spooky would that be?” Shooting the sequence was particularly exciting for P.D. executive producer/director Eriq La Salle, “because the street that we chose was LaSalle. So it was like La Salle closes LaSalle,” the EP shares. “But just the scope we had… We had a drone, we had a crane, we had all the toys, all the bells and whistles. We shot on a Sunday morning. But it paid off, and you when you see it, you’re like, ‘Oh, OK, that was worth it.'”

THE VICTIM WE KNOW | The dangerous outbreak will hit too close to home for one unlucky member of the Intelligence unit. “Usually, in these crossovers, we’ve always tried to have one personal sort of throughline,” Haas notes. “We decided early on, [Hailey Upton] should be the one, because Tracy [Spiridakos] is awesome and incredible to watch. So it affects her harder than most of the other characters,” and Jay Halstead will be feeling responsible for her scary predicament. 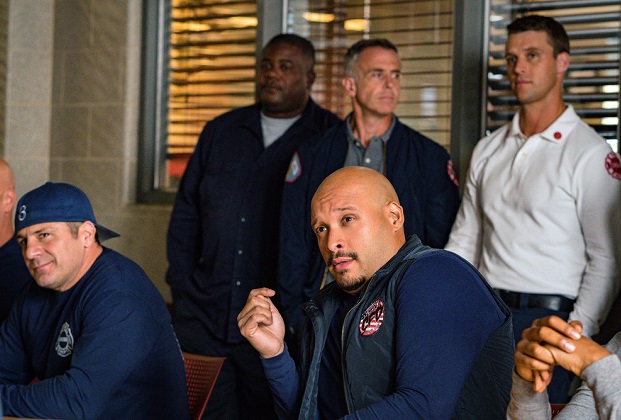 PERSONAL TIES | While the crossover can be viewed as a standalone movie, there will also be some personal developments that carry over into subsequent episodes. In addition to a “Burzek” curveball that will be revisited later in the season, “Cruz is kind of dealing with some stuff with [his girlfriend] Chloe,” Minoso teases. “We’ll see what fans are going to think about that.”

THE ICK FACTOR | What would a deadly pathogen be without some gross-out visuals? “It’s nasty. Some of the best worst special effects you’ve ever seen on our show,” Fire‘s Kara Killmer declares. Adds co-star Annie Ilonzeh: “There’s some gnarly wounds — some gnarly, crawly flesh-eating wounds.” So maybe put away the viewing snacks this week.

The #OneChicago “Infection” crossover airs this Wednesday on NBC, kicking off with Fire at 8/7c, followed by Med at 9 pm and P.D. at 10 pm.