This Wednesday’s #OneChicago crossover is not to be missed, and not just because a deadly bacteria is unleashed on the Windy City. For fans of Chicago P.D. exes Burgess and Ruzek, the three-hour event also features a development that took one of the show’s own stars by surprise.

“They threw a curveball at me that I did not see coming,” Marina Squerciati, who plays Burgess, tells TVLine. “I think the ‘Burzek’ story is going to be very interesting. We touch on it [during the crossover] in Episode 4, and then we’ll come back to it later.”

“There are some seeds planted,” says co-star Patrick John Flueger, aka Ruzek. Knowing what’s in store for the former couple, Squerciati thinks “‘Burzek’ fans may be excited.”

After their brief no-strings-attached hookup and several failed attempts to move on, “I think that it’s time that something happens [with ‘Burzek’]. Like, it goes or it doesn’t,” Squerciati adds.

Speaking of past failed romances, Ruzek is coming off an ill-fated one with Hailey Upton, which was “a completely different animal than his relationship with Burgess,” Flueger notes. “They were just better as friends. They were always going to be better as friends, and I think that they’ve just really realized that. I don’t think there’s going to be a lot of, like, leftover feelings, whereas Burgess, I think he’s just always going to be a little bit in love with her, regardless.” 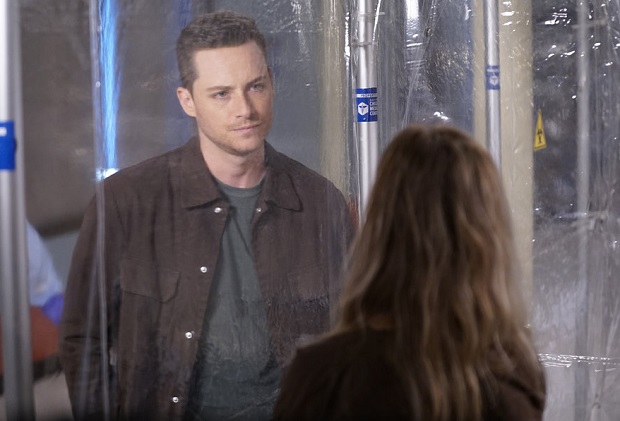 There are, however, all sorts of feelings between Upton and Jay Halstead, especially after the former finds herself in quarantine after being exposed to the crossover’s deadly pathogen. “Jay is the one that sent her on this mission that ends up making her get exposed. So Jay feels responsible,” his portrayer Jesse Lee Soffer previews.

“I think Jay cares, and he feels really bad,” Soffer continues, “and you get some nice scenes where he goes to see her and is sorry for the fact that she’s having to go through this.”

The #OneChicago “Infection” crossover airs this Wednesday on NBC, kicking off with Fire at 8/7c, followed by Med at 9 pm and P.D. at 10 pm.