For Oliver Queen, it was a whole new — if very familiar — world as Arrow opened its final season. And as Oliver carried out his first task for the mysterious Monitor, he eventually came to realize, quite tragically, what exactly is at stake with the coming Crisis.

The premiere opened by mimicking the first scene of the series’ pilot, with island boy Oliver racing to light a bonfire and catch the attention of a Chinese fishing boat passing by Lian Yu. ‘Cept the Oliver they found stranded had not been gone for five years, but 12.

Returning home to the Queen mansion, Oliver reunited with mother Moira and her new husband, Malcolm, and then Tommy… but not Thea, who he learned was so bereft after losing her father and brother that she OD’d on Vertigo on her 18th birthday. Following a facsimile of the family dinner from the pilot, Oliver pinched Moira’s card key for Queen Merlyn Industries and sneaked off to steal from the applied sciences lab some dwarf star particles. But not only had someone beat him to the punch, but they left behind several dead bodies with arrows in them. Another twist: Someone dressed as The Hood showed up to clash with costumed Oliver, but Black Siren intervened, before asking what frenemy Oliver was doing on her Earth. The Hood of Earth-Two was in turn revealed to be, no, not Robert Queen but Adrian Chase.

Upon learning the Dark Archer had beat him to the dwarf star particles, Oliver jumped to the assumption that Malcolm was, as on his Earth, said baddie. Oliver was later introduced to his bodyguard, John Diggle, whom he soon realized was his Dig, from Earth-One. Pulling over for a confab, Oliver explained his hasty exit from Earth-One and the Monitor’s very dire warnings about the future. Oliver can’t possibly ask Dig to join in this crusade, but as John notes, that’s what brothers are for.

Oliver, Laurel, Adrian and Diggle later get into a skirmish with the Dark Archer, whom Oliver privately comes to discover is Tommy. When confronted, Tommy gets the drop on Oliver, with the help of body man Rene and dirty cop Dinah. Tommy explains to a captured Oliver that the Glades are to blame to for Thea’s death, ergo his own, dwarf star-powered plan for a seismic Undertaking. Oliver escapes and then engaged in a rooftop fight with the Dark Archer a la the Season 1 finale. In the end, he is able to appeal to Tommy to not destroy the Glades, before capturing him.

After Oliver delivers Tommy to the cop shop, Laurel rushes in to say the city is being attacked. Fiery light begins permeating the building, seemingly “incinerating” it and  its occupants bit by bit. It’s the Crisis, a wave of anti-matter that lays waste to entire worlds. Diggle uses Cisco’s gizmo to open a portal, into which he and then Laurel jump. Oliver then watches Moira and Tommy get consumed by the attack, before escaping through the breach himself. 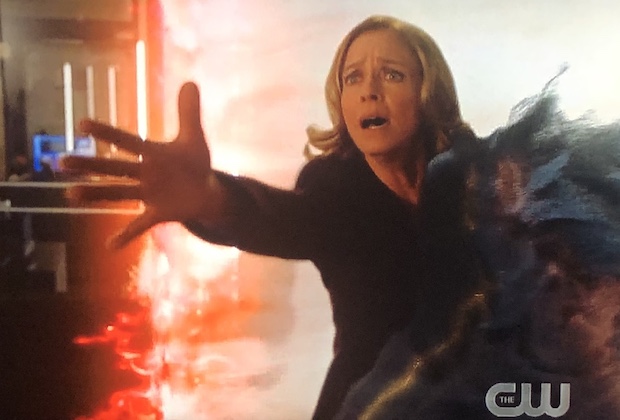 A moment of silence, please, for Earth-Two (including presumably Harrison Wells and his daughter Jesse)…..

“When we started breaking the season as a whole, because we don’t have that many episodes, we knew that we wanted to start big, and we wanted to introduce the upcoming Crisis immediately,” Arrow showrunner Beth Schwartz explains. “Crisis is starting earlier than we thought.”

Now mind you, one can’t just eradicate an entire planet without getting the proper approvals. Rather, sister series The Flash had to sign off on Earth-Two’s destruction. “We were like, ‘Is this OK? Does this ruin things?’ And you know, they were very gracious,” Schwartz reports.

As Arrow marches forward with its 10-episode farewell run, just as the season premiere mirrored the pilot and Season 1, “We visit places that we’ve gone to in our previous seasons… different locations,” Schwartz previews. “I think we only have, like, two episodes actually in Star City” — though, barring the “Crisis” crossover, the premiere is the only episode to have scenes on an alternate Earth.

* With Willa Holland set to recur during the final season, Earth-One’s Thea “comes back in a very cool way.”

* If you sense that Oliver is getting annoyed by the Monitor’s obfuscations, rest assured, “He gets fed up and he confronts him… soon.”

* “Some” of the characters who popped up in the season premiere “will return” in some fashion/incarnation, as the season goes on.

* Schwartz says there was “definitely” some discussion about having Tommy jump into the portal with Oliver, Laurel and Dig.

And as far as scenes we won’t see this season, “There was a nice Laurel/Tommy moment in the in the club that got cut [from the premiere], which I was sad about,” Schwartz lamented. But along with any other Season 8 scenes cut due to time, “Hopefully we’ll get those in the DVDs.” (With reporting by Vlada Gelman)