There are no radioactive spiders, crashing spacecraft or murdered parents bleeding out in dark alleys, but Netflix’s Raising Dion is a comic-book-based origin story nonetheless. Only this one raises the question of who’s the bigger superhero: the boy who begins manifesting strange powers, or the mom who has to teach him how to use them responsibly?

Alisha Wainwright (Shadowhunters) plays Nicole Warren, mother to the titular budding champion. The family drama’s focus on Nicole’s story was “one of the aspects that really spoke to me,” she tells TVLine. “I’m not a mother, but I can understand what it’s like to have to overcome adversity and obstacles in trying to preserve relationships and love.” 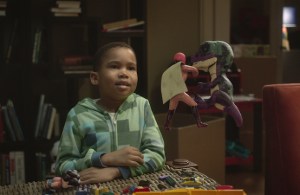 As if Nicole doesn’t have enough to deal with when her young son (played by newcomer Ja’Siah Young) starts manifesting the ability to move objects with his mind, she’s also trying to help him through his grief over the accidental death of his father, Mark (played in flashbacks by Michael B. Jordan, who also executive-produces the series). She’s aided in all of this by Jason Ritter‘s Pat, Mark’s best friend/fellow storm-chaser who shares Dion’s obsession with graphic novels.

“At the center of it is this huge loss of this man that they both truly loved,” Ritter says, adding that the series certainly flirts with how far the growing affection between his and Wainwright’s characters will go in Season 1. “There’s a delicate line. But one of the things that I liked about the writing of the show is that these are complicated characters, and it’s not set up in a ways that you’re like, ‘Oh, these are the two star-crossed lovers that are going to end up together at the end.'” After all, as he admits with a laugh, Pat means well but “sometimes, he’s a little much.”

The subject matter may sound heavy, Wainwright notes, but the show has a markedly upbeat tone. “When I read the script, all I saw was the positivity… that [Nicole] was always trying to brighten things up” despite sometimes being nearly overwhelmed by her own grief, she says. “By and large, he’s growing up in a healthy home environment, and she’s capable of providing for him. I just love that this family is being portrayed in such a positive, healthy way.”

Throughout the nine-episode first season, which is now streaming, viewers slowly learn more about the mysterious circumstances surrounding Mark’s death and how an otherworldly atmospheric event might have played a part in Dion acquiring his abilities. And Episode 8, in particular, contains a twist that took Ritter aback. “I remember in [reading] the script, my eyes popping out at a certain point,” says the Parenthood alum, who currently recurs on ABC’s A Million Little Things. “And then there’s a big resolution and then a cliffhanger that would set the tone for Season 2 — which I hope happens.” 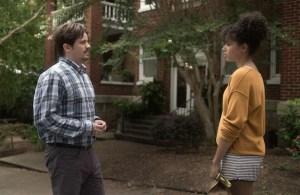 Another item for the Season 2 wishlist? A present-day scene that includes Mark, Nicole and Dion, something teased only briefly during the series’ freshman run.

“One of my favorite aspects of that is watching Dion watch his parents,” Wainwright says. “I would love to be able to have them have that moment again, just for Dion’s sake, if and when a Season 2 comes along.”