Split in two timelines, Sunday’s episode of The Walking Dead not only revealed how Alpha chose her Beta seven years ago but how the Whisperers’ leader more recently selected her Gamma (Thora Birch, making her debut). Read on, and we’ll go over all the gory — and I do mean  gory — details.

SEVEN YEARS AGO | For the sake of an easier read, rather than cut back and forth between present and past the way “We Are the End of the World” did, I’m going to cover first the flashbacks to Alpha and Beta’s meeting, then flash-forward us to the present (or close to it — the hour’s present actually took place shortly before the events of the Season 10 premiere). So, seven years ago, Alpha was trying to harden up Lydia by smearing blood all over the both of them so that the girl could practice not freaking out while walking among the dead. It did not go well. When Lydia saw a woman getting disemboweled by zombies, the youngster flipped, forcing her mother to hurry them to safety inside a hospital. Well, relative safety, anyway. There was a scary man inside wearing a ski mask and brandishing a knife like he was auditioning for AHS: 1984. Guess who. Though his inclination was to attack his uninvited guests, Alpha managed to convince him to let them stay the night. “Is he a monster?” asked Lydia later. “We’re all monsters now,” Alpha replied. Very quickly, it became obvious that Alpha and Beta were cut from, if not the same sociopathic cloth, very similar fabric. She went on about how people shouldn’t have names anymore since those who were still surviving already knew each other on a primal level. And after he admonished her for humming, he remarked that “the sound of the dead… is the only song I never want to end.” Come bedtime, Lydia turned down Alpha’s offer of her favorite stuffed bunny. The child didn’t want it any longer, she wanted to be more like her mother. This was music to Alpha’s ears since, as she told her daughter, “If you can’t [become more like me], I’ll have no choice but to leave you behind.” (And the award for Mother of the Year goes to… ) 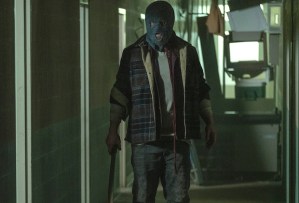 Later, Alpha killed a stray walker in a hallway but was beset by more of the dead than she could handle. Beta leapt in to save her, and she discovered that “I like killing with you.” (Did that count as… flirtation?) Afterwards, as she Ginsu’d a felled walker, digging into its guts without puking, he marveled, “Oh, you’re different.” After the idea of using “big man” as a handle was shot down, Alpha christened him Mr. B, which she noted wasn’t a name, just a letter. “If I’m B,” he asked, “what does that make you?” Well, duh — “A,” she said. But then she pushed their demented connection too far by trying to remove his ski mask. “Sunrise,” he huffed. “Don’t come back.” Still, she could tell that she had him. Later on, after Lydia smeared guts on her face and let out a walker to prove she could be more like her mother, Alpha had to cross over to Beta’s side of the hall to search for her. There, Alpha spotted a snapshot of two men in front of a rehab center. One presumably was Beta; the other, a guy in a Have a Happy Day T-shirt, someone for whom he must have cared. (Brother maybe? Counselor?) Anyway, Beta had no sooner found Alpha in the forbidden zone than in walked a zombified Have a Happy Day guy, whom she immediately put down. Though Beta was enraged, she managed to convince him that “the world went dark so that we could see a new path. So come… walk with me in the darkness, and you’ll never be alone again.” In response, he declared himself the end of the world. No, she corrected. “We are the end of the world.” With that, he allowed her to lift his mask and see his face. (We, however, didn’t get a peek at what was a visage presumably disfigured from the walker tussle that had led him to his hideout.) “I can’t leave him,” Beta said of Have a Happy Day guy. “You won’t have to,” she replied, handing him a knife… to cut off the face that it seemed safe to assume he still wore in the present. 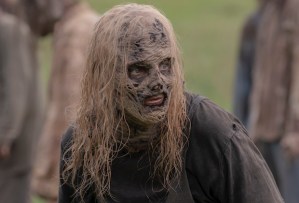 PRESENT | Spring having arrived, Beta was eager for the pack to return to their former stomping grounds. “We are far from the enemy,” he pointed out to Alpha. “Their fear will subside.” Pshaw, she basically replied. She was sure that all the beheadings would keep them good and scared for a long time. Nonetheless, they had a mission to accomplish, one that involved rounding up as many “guardians” as possible. To that end, Alpha had Beta take “the sisters” with him to gather new walkers. One of the sisters was Gamma, though she hadn’t yet been given that title. The other was the mother of the baby that Alpha had been so willing to sacrifice to make a point to Daryl back in Season 9. This sib was significantly less committed to the Whisperers’ way of life than Gamma. And she had been so traumatized by her child’s near-death that she suffered from flashbacks — the kind that leave one sobbing and screaming in a field full of walkers. Beta saved her, but we have to assume the girl wished he hadn’t. “You will pay,” he hissed. Back at the Whisperers’ camp, Alpha prevented Gamma’s sister from being executed. She even demonstrated what passed for empathy, saying that Beta could never understand how it feels to abandon one’s child. Still, since the girl was getting the pack talking about how nice things looked at Hilltop, and how cool it might be not to smell like a walker 24/7, Alpha would handle Gamma’s sister “in the deeper place.” (Gulp.) 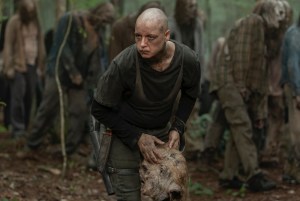 There, to the girl’s shock — and, frankly, mine — Alpha spared her… even kind of embraced her. Beta was shocked, too. (OK, we all were!) “If she strays again,” Alpha promised, “I will skin her alive for all to see.” As for the way the girl was rousing the rabble, Alpha would show them soon enough that our heroes’ world of personal hygiene and beds was nothing but a fantasy. Was Alpha content? Beta wondered aloud. Because he’d noticed her wandering away from camp at night now and again… Hmm. The following day, Alpha and Beta were marching their herds when the satellite went blazing overhead. As the guardians descended into chaos, Gamma’s sister was once again triggered, this time by the sight of a walker wearing a baby carrier. So she removed her mask and, screaming so as to draw walkers, attacked Alpha. Her assassination attempt might have been successful, too, had Gamma not intervened, pulling her sister off of Alpha and throwing her down to be eaten alive. That night, Alpha expressed her gratitude to her savior by anointing her Gamma in front of the whole pack. Beta, meanwhile, could scarcely contain his skepticism; he clearly saw Gamma for what she was to Alpha: a replacement Lydia. Only a day later, he discovered that the actual Lydia was still alive and well. Tracking Alpha to the spot to which she kept sneaking off, he found that she was building… something for her daughter. (Was that a nest?) She’d even kept the girl’s stuffed bunny. Tearfully — yes, tearfully — Alpha confessed that she’d lied. She hadn’t been able to kill her child. To my astonishment, Beta rather tenderly reached out to Alpha and agreed to keep from the pack the fact that their leader hadn’t murdered her daughter, as she’d led them to believe. Later, Beta reported that he’d seen smoke near their border. If our heroes had crossed it, Alpha said, they’d “teach them a lesson.” With that, she and Beta recited their apocalyptic “prayer” and rejoined the herd. Somehow, Alpha was able to remove her mask among the walkers — was her natural fragrance that pungent? — and take the detour that allowed her to spot Carol, which theoretically brings the Whisperers’ present up to the same point as our survivors’ present.

So, what did you think of “We Are the End of the World”? How would you categorize Alpha and Beta’s relationship in the present? In so far as they can feel anything, is that… love?