With Season 10 of The Walking Dead fast approaching — and interest piqued in the wake of the AMC drama’s San Diego Comic-Con trailer — the show released a pair of first-look images of new cast member Thora Birch Thursday.

As announced at Comic-Con, the American Beauty actress has been cast as Gamma, who is not only a sentry for our heroes’ new nemeses, the Whisperers, but a total Alpha acolyte. She is said to believe 200 percent in both the group’s animalistic way of life and in their merciless leader. (In other words, she’s the total opposite of Alpha’s daughter Lydia, who in Season 9 fell in love with Carol’s ill-fated son, Henry, and was taken under Daryl’s wing.)

And Birch won’t be the only new addition to the ensemble when Season 10 premieres on Sunday, Oct. 6 (9/8c): Kevin Carroll, late of The Leftovers, has been tapped to play Virgil, a survivor who is, as anyone would be in the apocalypse, anxious to get home to his family.

Click on the images below to take a gander at them full-size, then hit the comments. Are you looking forward to the Whisperers war? Or do you still have battle fatigue after the conflict with the Saviors? 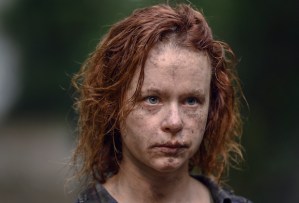 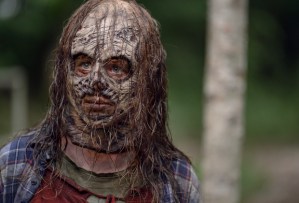