Need to catch up? Read our previous The Blacklist recap here.

Last we saw The Blacklist’s Raymond Reddington, he was tied to a chain-link fence in a dark warehouse, quickly losing blood while Katarina Rostova watched. At the start of Friday’s episode, though… well, actually, nothing has changed. (Except for the fact that Red now has 20 percent less blood in his body.)

On the NBC drama’s latest hour, Katarina continues to torture Red, in the hopes of getting more information about who’s hunting her. She weeps to Red about something that happened in Belgrade, saying that her whole life got blown up that day, and all she wants is her family back. But Red insists he had nothing to do with whatever went down in Belgrade, and he refuses to give her whatever information she’s seeking. Furious at Red’s silence, Katarina decides to pay Liz’s grandfather, Dom, a visit, convinced he’ll provide the intel she wants.

Soon after Katarina leaves the warehouse, the nurse that initially helped Red escape his fake hospital room — whose name we later learn is Francesca — pulls him down from the fence and gets him into a car. Red, who is fading alarmingly fast at this point, borrows Francesca’s cell phone to call Dembe, whom he warns that Katarina is coming after Dom. He instructs Francesca to head to Dom’s instead of the hospital, and she begrudgingly obliges… once she cuts out the tracking device that Katarina had implanted in Red’s neck.

Interestingly, Francesca becomes a key player in all of this Rostova family drama. Once she gets Red to Dom’s, Francesca reveals more details about her past (she was a field medic in the Army, for example), and she decides to remain loyal to Red, even as Katarina closes in on Dom’s house. When Katarina and her men eventually arrive, Francesca reveals that she’s betrayed the woman, and all parties begin shooting at one another across Dom’s property — and Dom himself takes a bullet in the chest, courtesy of a Katarina henchman. (Reader, I gasped.) 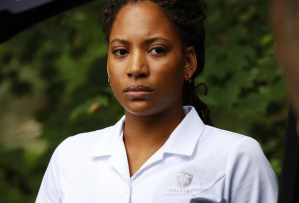 Francesca, Red and Dembe swiftly get Dom down to his cellar, where Francesca puts a temporary tourniquet around his wound. Katarina, meanwhile, approaches the cellar door and urges Red to open it, insisting that she’ll have to keep Dom alive in order to get the information she wants. But just as Katarina threatens to shoot the door open, one of her men whispers something in her ear… and all of the blood drains from her face. Next thing we know, Liz and Ressler — who had been tracking down Katarina’s whereabouts this entire time — barge into Dom’s home, and Katarina is nowhere to be found, having been tipped off by her team that the FBI was approaching. Liz and Ressler get Red & Co. to safety, and Francesca performs emergency surgery on Dom, who wouldn’t have survived without it.

Unfortunately for Liz, Red is a bit miffed that this incident even happened to Dom in the first place — and he blames Liz, informing her that the only reason her grandfather got shot that day is because she just had to go asking questions about Katarina Rostova. “You raised an old ghost,” Red warns her. (To her credit, Liz cops to the fact that she and Ressler were trying to uncover the Rostova family secrets — but she’s very clear with Red that he will need to answer all of her lingering questions one day.)

Meanwhile, after Francesca performs the surgery on Dom — to a questionable level of success, depending on how long Dom’s brain went without oxygen — Red informs her that she hasn’t quite made up for Louis T. Steinhil’s hospital ruse just yet. In order to fully even the score, Francesca must now help Red track down Katarina. She looks just thrilled at this news. (Oh, and speaking of Louis T. Steinhil: He fakes his own suicide during this episode, in true illusionist fashion.)

At the end of the hour, Liz and Agnes leave their apartment so that Agnes can get to school… and they run right into Katarina Rostova in the hallway. Of course, they don’t know who she really is; Katarina introduces herself as Maddie, a new neighbor who’s subletting one of the apartments down the hall from Liz. But unbeknownst to Liz, Katarina does drop at least one big hint about her identity, remarking that Agnes “reminds me of my granddaughter.” Ha!

Despite having been conned by multiple people in her life (including her husband), Liz doesn’t seem immediately wary of “Maddie.” Instead, she says a pleasant goodbye to the woman, who predicts that “we’ll be seeing a lot more of each other.” Lizzie, you in danger, girl.

OK, your turn. What did you think of The Blacklist’s latest outing? Drop your thoughts in a comment below!