The Blacklist’s Season 7 premiere ends in much the same way as it begins: with Raymond Reddington at the mercy of Katarina Rostova.

Ahead of the NBC drama’s return on Friday night, series creator Jon Bokenkamp had called Katarina “the most formidable Big Bad that we’ve introduced,” further describing her as “menacing and powerful and in charge in a way that is weirdly terrifying.” But if the events of this premiere are any indication, even those ominous adjectives may not have adequately described her ruthlessness.

Let’s break down what happened in “Louis T. Steinhil”:

WE’LL ALWAYS HAVE PARIS | After getting drugged and abducted by Katarina in last spring’s finale, Red wakes up, disoriented, in a hospital bed. Given all of the French signage and the accents on these doctors, it would seem that Red is still in Paris — but something is very wrong. He’s strangely held down on the bed by a series of large, foam blocks, and a doctor informs Red that the men who pulled him into an SUV also shattered his spine while kidnapping him. The hospital staff performed emergency surgery to remove the injured bone and re-fuse Red’s spine… but Red remains immobile. The doc suggests that Red’s condition could improve with time, but right now, he seems to be paralyzed from the waist down, and Red is aghast to learn he may never walk again. (Also of note: Even in his haze, Red recalls quick snapshots of his encounter with Katarina the night before, but he lies to the doctor that he doesn’t remember who attacked him.)

Red then gets a visit from Rene Oban, chief inspector for the French intelligence agency DGSI. Rene confesses that he’s been hunting Red for years, but he’s also been searching for Katarina Rostova, to no avail. Rene mentions something about the Townsend directive — a standing order to kill Katarina that is “very much in play” — but since Katarina has intel that Rene wants, he needs to keep her alive, and he wants Red to tell him where she is.

You might suspect, at this point, that Red’s paralysis and interrogation smell a bit fishy — and you’re right to be skeptical. After Rene leaves Red’s hospital room for the second time, we learn that this is all a big ruse. Red isn’t really in a hospital; he’s holed up in one section of a soundstage, where a hospital set has been constructed. Rene isn’t really French, either; he’s American. And none of this is even happening in France! Red has since been relocated to Annapolis, Maryland, and all of these nurses and doctors drop their French accents as soon as they leave his room. 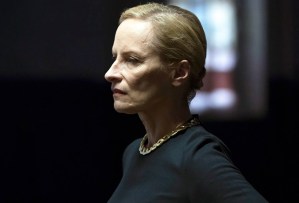 Naturally, Katarina Rostova is the one behind this large-scale deception. She enlisted the services of Louis T. Steinhil (an anagram of “The Illusionist”), aka the man posing as Rene Oban. Louis makes his living by creating elaborate smokescreens behind which bad people can do bad things. In this case? Louis constructed a fake hospital room and adjacent hallway, then hired a bunch of hospital “staff,” in order to keep Red bed-ridden and convinced that he’s paralyzed — when, really, he’s just being periodically injected with an epidural that makes his lower half go numb, rendering him incapable of walking.

But Red being Red, it only takes him a few hours in the faux-hospital to figure out what’s going on. When he swipes a cell phone from the pocket of a male nurse (while being relocated to a wheelchair), he’s confused to find that the lock screen is a photo of the nurse and his son, both wearing Washington Nationals jerseys. Hmmm.

Later, when a female nurse — who seems awfully conflicted about what she’s doing to Red — comes in to administer his next epidural, he wrestles the syringe out of her hand and threatens to stick it in her arm if she doesn’t tell him what’s going on. She’s quickly persuaded and reveals that the drugs have been keeping him immobile; if he doesn’t get a dose, he’ll regain the feeling in his legs and can walk again. She then hurries over to a nearby safe and grabs a gun that was stashed away, but Red gets that from her, too. He then enlists her help getting “Rene” back into the room, at which point Rene receives the epidural, buying Red enough time to hop out the window and make his way off the soundstage.

Unfortunately, Red’s escape is short-lived. After breaking out of the building where the hospital set was housed, Red gets cornered by a slew of SUVs, and Katarina shows up to watch her men take Red away once again. This time, the punishment is much worse: In another shady-looking warehouse, Red gets shackled to a section of chain-link fence, and the nurse he held at gunpoint earlier shows up again, this time to stick an IV in his neck (ouch!) and watch as his blood begins to fill up an attached bag.

“I don’t like this, Raymond,” Katarina tells Red as he becomes weaker. “But I can assure you that before we’re finished, you’re going to tell me everything I want to know.” (And she seems mighty confident in that prediction.) 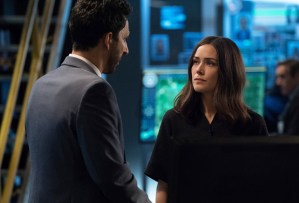 MEANWHILE, BACK AT THE POST OFFICE | While all of this is going down, Liz and the task force are trying to locate Red, after Dembe alerted Liz that Red had been abducted. Their search hits a few snags at first, primarily because they’re under the impression that Red is still in Paris.

Eventually, though, Aram uncovers multiple payments that were made to a warehouse in Annapolis, which is where he suspects Red is being held. Unfortunately, by the time the team gets there, Red has already escaped his fake hospital room (and, unbeknownst to them, been re-captured by Katarina). But they do get a chance to interrogate some of the men and women involved in the ruse — and they all reveal that Louis T. Steinhil was hired by a Russian woman for this job. “Katarina Rostova,” Liz immediately deduces.

And that isn’t the only big news that comes out in this premiere. Liz also spills the beans to Aram and Cooper that Red is an imposter, though Cooper seems highly skeptical. Later, Liz apologizes to Cooper for not telling him the truth sooner. But she knew that if she had blabbed about Red’s real identity earlier, Cooper would want to report his misrepresentation to the Department of Justice — and Liz doesn’t want him to do that, given everything Red has sacrificed for her. “I was nobody to him. The illegitimate daughter of a childhood friend. And he devoted half his life to me,” Liz says. “Do you know anyone else who does that? Because I don’t.” (I repeat: Cooper seems highly skeptical.)

OK, your turn. What did you think of The Blacklist‘s Season 7 premiere? Grade the episode in our poll below, then drop a comment with your full reviews.