The staffing crisis at Grey Sloan only got worse in Thursday’s Grey’s Anatomy. When a Meredith fan called out Bailey for canning the award winner, the chief turned around and dropped a pink slip on the individual who’d spoken up, thus making herself even likelier to be called a witch than the Charmed sorceresses who passed through the episode as part of ABC’s Cast From the Past stunt. Who was the latest to get the axe? And who else wouldn’t be scrubbing in again at Grey Sloan anytime soon? Read on… 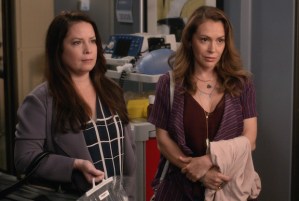 ‘DO NOT WALK TOWARD THE LIGHT’ | Early on in “Reunited,” Richard discovered that, thanks to efforts he’d all but forgotten he made, his old friend Gemma (Jasmine Guy), now 62 days sober, worked at Pac North in the billing department. (And with him and Catherine on the outs… uh-oh.) Shortly, Webber broke it to estranged siblings Haylee (Alyssa Milano) and Heidi (Holly Marie Combs) that their sister Heather appeared to be brain-dead following a disfiguring fall into a construction site. Once a last, conclusive test was performed, it would be up to Haylee and Heidi to decide whether to take Heather off life-support.

First, the siblings just reacted very differently to this development: Haylee by bringing in crystals in hopes of healing Heather, Heidi by saying her goodbyes. Then, they began quarreling, prompting Richard to adopt a parental tone as he hollered that they should make the decision about Heather together. By doing so, it would be like she had given them back to one another. Ironically, just as they agreed that Heather was gone and let Richard turn off her life-support, the deceased’s phone rang: Turned out, her bag had been stolen! They’d given permission to pull the plug on a stranger! After that rough day, Richard attempted to reach out to Catherine but got only voice-mail. So he accepted a dinner invitation from Gemma. (I repeat: Uh-oh.) 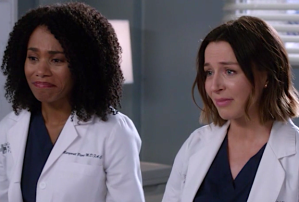 ‘LOVE MAKES IT ALL WORTHWHILE’ | At Grey Sloan, Maggie — still struggling with the fact that Jackson had gone into a fog and come out with a new girlfriend — received words of wisdom from a spry patient named Bertie (Hal Linden). At the same time, Amelia and Link happened upon a South Korean woman roaming the halls looking for her birdie. You probably didn’t need Nico to come along and translate to guess that her birdie was going to actually be Bertie, did you? “This is the first woman I ever loved!” explained the old guy when they were reunited. He’d fallen for her when he’d been stationed in Korea during the war but had lost track of her (as had she him) when they both missed their train-station rendezvous. Sixty years later, she’d managed to find him online and had bought a plane ticket to Seattle after he’d posted about his surgery.

Meanwhile, Dahlia seemed a lot less excited about performing an ALPPS procedure with Jo than she would’ve with Mer. The patient, Shirley, wasn’t too jazzed about Dr. Grey being replaced on her case, either. In fact, the only way Jo managed to get her into the O.R. was by convincing Bailey to allow Mer to perform “remote surgery” — basically, observing the whole thing via cell phone. Despite a touch-and-go moment during the procedure, it didn’t appear that Jo really needed a lot of supervision. Her first week as an attending, and she’d aced it — at which point Bailey hung up on Grey. Toward the end of the hour, a tearful Dahlia lit into the chief for firing Mer, who’d been the reason that she and so many interns had chosen to come to Grey Sloan. In response, Bailey sacked her on the spot. “Now you and your hero have something in common,” she said.

‘YOU’RE JUST HUMORING ME BECAUSE YOU KNOW I MISS THE SMELL OF BLOOD’ | In other developments, after being forced to leave not only rooms but patients because of Tom’s restraining order, Owen welcomed the chance to take Allison on a tour of Grey Sloan with Teddy, who felt like she was failing as a mother. After seeing the way his babymama lit up in the hospital, Owen suggested that she return to work, and he’d stay at home with their newborn. “A happy mom is a better mom,” he noted. And elated, she agreed. Elsewhere, Jackson turned an opportunity to treat Vic for a scratch on the forehead into a chance to seduce her with a description of his skills as a, um, surgeon. “We should take it slow,” they agreed… an instant before deciding, “That’s slow enough,” and getting passionate. Afterwards, Vic’s attempt to clear the air with Maggie went so spectacularly awkwardly, it was probably only a little less painful than Tom’s electrified testicles.

Finally, while Bailey kept DeLuca in charge of the ICU as a kind of punishment, Schmitt dropped a catheter guide wire into a patient. When the chief hit the roof, DeLuca took the blame, telling the intern that what happened on his watch was his responsibility. Still, DeLuca was gonna make Levi carry around a guide wire for a week so he’d remember never again to let go of it. (Later, Nico insisted that his boyfriend demand more of himself, starting with a night of practice… together, at least.) And, having seen how much Bertie and his lost love regretted the years they’d missed, Amelia elected to thumb her nose at her fears and start telling everyone that she and Link were expecting — by blurting it out over drinks with her boyfriend, Mer and DeLuca.

So, do we all assume that Dahlia will get hired at Pac North? Are you feeling Jackson and Vic? Is Tom losing some of our good will by being so petty with Owen, or is it deserved pettiness? Comment away.