I understand that Maggie’s mom is going through something big, emotional and messy as we enter this week’s episode. I similarly understand that Maggie, with her huffy sighs and angry walk-outs, isn’t giving her mom much time to explain exactly what’s going on between her and the affable stranger Mags met last episode. But we don’t get any closer to the truth this week — despite a promising set up for a dramatic brunch at the end of the hour — and it’s frustrating.

I feel like the show’s Powers That Be understand our pain. Why else would they give us Gary performing the heck outta the arm choreography from Grease’s “Greased Lightning?”

Read on for the highlights of “Mixed Signals.” 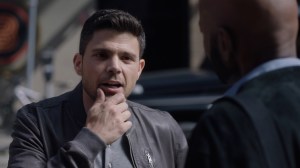 ROME IS BACK TO WORK | After dropping that bomb about Jon maybe being his dad, PJ tries to flee, but Rome stops him. “Your mom is Barbara Morgan?” he asks incredulously. “It’s Nelson now,” the teen confirms. Rome points out that Dave was Barbara’s boyfriend back in the day; if anyone other than Mitch is PJ’s pop, it’s probably him. But PJ brings up the video Jon left. “I think something happened between Jon and my mom after Dave died,” he says. “Why was leaving a tape for my mom the last thing Jon did?” Rome corrects him: The actual last thing Jon did was leave Barbara roughly half a million dollars.

Rome later has lunch with a producer friend of his (hi, Power‘s Jerry Ferrara!) who loves the script but suggests that Rome ditch the suicide aspect of it; to be fair, the guy isn’t aware that Rome worked that in based on his own experiences. Outside the restaurant where the old pals meet, an acquaintance of Rome’s approaches him to ask him to direct a Lexus commercial, but Rome turns him down.

Meanwhile, the women’s shelter where Regina donated the money from her pedophile uncle wants people to know about her generosity, but she demurs — the donation was anonymous, she says, and she wants it to stay that way. Later in the episode, she takes some of Andrew’s advice about hiring a social media consultant but then bristles when she sees a first pass of the restaurant’s website, which makes it seem like Regina was Andrew’s “discovery.”

At home later, Regina works through her complicated feelings about, well, everything, by recognizing that her problem with Andrew stems from the fact that “he’s a businessman in a position of power over me” and by acknowledging that while she didn’t want to use her uncle’s money in the restaurant, she wishes she had another way to do it all on her own. So Rome instantly decides to take the Lexus gig after all/ “I’m doing it for the love of my life. Let me help you, baby,” he says when she protests. Then she cries, and they hug. Oh, and he’s not taking his friend’s notes on the script, because — like Regina re: the women’s shelter — he doesn’t want to be anonymous anymore.

MOMMY ISSUES | The morning after Maggie saw her mother with the mystery guy at the restaurant, she’s in a mood that even Gary cannot tease her out of. “You actually had me believing that she was here to see me,” she says, revealing the true nature of her hurt. He later shows up at her office and teases her into doing a mock session with him, but Maggie isn’t in the mood and point-blank asks him why she’s the very first woman he’s ever lived with. Then she adds that her issues with her mom are not his to fix, and he might want to look into his own weirdness with women, which likely stems from his mother, Alice.

Eventually, Maggie goes to her old apartment and finds her mother sobbing. But before Mags can talk to her, she realizes that her mom is on the phone with the guy from the restaurant, who is named Eric — damn you, AirPods! — and her proto-sympathy turns to rage. Patricia hangs up and tearfully admits that Eric is “a friend” she met a month before. “Did you come to Boston to see him or me?” Maggie demand. “Both,” Patricia says sadly, watching her daughter walk out once more.

Back at the apartment much later, Gary walks in the door and immediately tells Maggie, in detail, about how his mother left and how he couldn’t bring himself to open his bedroom door when she knocked to say goodbye. “I thought if I didn’t answer it, she couldn’t leave,” he says. “One of the greatest regrets of my life, not opening that door.” Maggie draws him near and kisses his forehead. “You don’t have to worry,” she says softly. “I don’t give up on the people I love.”

Then we see Gary call his mom, but he can’t bring himself to say anything when she picks up. And on a morning not long after, Patricia arrives for breakfast at Gary and Maggie’s… only she’s brought Eric along as a surprise. (To be fair, it seems to be a surprise to him, too, that Gary and Maggie didn’t know he was coming.) 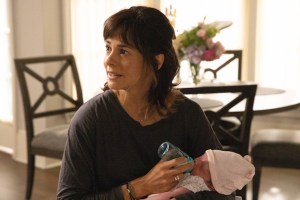 WHOA KEEP TALKIN’ WHOA KEEP TALKIN’ | While Delilah is on a date with Andrew, Gary learns that Danny has a call-back for the school musical. The show? Grease. The part? Kenicke. But the kid is divided about it, because his main competition is Elliot, aka his old crush, with whom he is no longer speaking. Gary gifts Danny a pleather jacket and coaches him on the choreography to “Greased Ligthning,” and I have to applaud James Roday’s dedication to just about everything having to do with this storyline.

There are many heart-to-hearts, and a few pep talks, and finally Danny gets some good news: Elliot got the part of Kenicke… but Danny got Danny Zuko! (His night ended much better than his mom’s, who agrees with Andrew that they’re not ready to see people romantically just yet.)

BEHIND THE 8 BALL | Katherine and Eddie are surprised when Theo wants to go to a sleepover at his friend’s house, but it soon becomes clear that the kid is angling for his parents to have some alone time. (He also takes the suitcase so his mother can’t leave again, which, sad.) Eddie and Katherine wind up shooting pool at a bar, and they kiss, but then she pushes him away and acknowledges that she’ll probably be giving him some mixed signals as she figures everything out. He rolls with it, AS HE SHOULD: After what he’s put her through, Eddie should roll with every damn thing that woman says and/or does.

Elsewhere, PJ takes Jon’s Harvard jacket that he stole from Gary and sends it off to be DNA tested to see if the dead man is actually his dad.

Now it’s your turn: What did you think of the episode? Hit the comments!