Kevin and (his maybe potential wife?) Cassidy finally come face-to-face in this week’s This Is Us and… what’s the opposite of a meet-cute? Because that’s how their first interaction unfolds. In fact, Cassidy even labels the whole interaction “creepy.” So order those save-the-dates now!

In other Pearson news, Toby’s slim-down secret is out, and Deja now knows about Malik’s daughter. Read on as we review what happens in “Unhinged.”

WHAT’S NICKY UP TO? | In a montage, we watch Nicky in his daily life after Kevin, Randall, Rebecca and Kate left him last time. He drinks in his trailer. He starts therapy at the Veterans’ Center. He hangs a photo of Baby Jack, sent by Kevin, on his refrigerator. He starts to talk more with his doctor. He puts away the booze, and he cleans up his place. Things are looking better!

Then one day, the doctor he’s started to trust tells him she’s being transferred to Arizona. She assures him he’ll get a new therapist, but in his anger, Nicky barely hears her. He goes home and drinks, then returns to the center and throws a chair through a window — AKA the incident we saw in the season premiere, with Cassidy in the group session disrupted by the shattering glass.

He’s soon loaded into the back of a cop car, but he’s not too far gone to toss off a West Side Story reference (“You watch your head, Officer Krupke!) or to tell Kevin “I didn’t need you to come” when he shows up at the trailer with his houseplant. 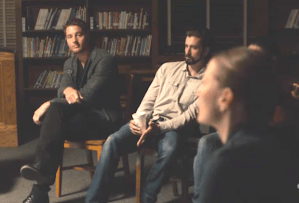 A LAUGHING MATTER | Through Kevin’s intervention, Nicky is allowed to stay at the center — though he’s on probation, and his new therapist warns Kevin that “None of us can help someone who doesn’t want to be helped.”

While Nicky is seeing the doctor, Kevin strikes up a conversation with a kid who’s also sitting in the waiting room. They wind up playing video games together and eating junk food from the vending machine, and that’s the scene that Cassidy walks in on when her own session is done. The vet is immediately wary about why a grown man would be so into hanging out with a kid, and though she recognizes Kevin from TV, she insults him greatly when she thinks he was a cast member on Who’s the Boss? instead of The Manny. And when Nicky joins them in the waiting room, she recognizes him, too. “You’re the guy who threw a chair at me!” she says, moments before he storms out and heads straight to the bar across the street.

Kevin angrily follows his uncle and announces that he needs an Alcoholics Anonymous meeting — and that Nicky is coming with him whether he likes it or not — and that’s how they find themselves sitting in an AA circle that also happens to include Cassidy. Kevin tells the group that when he’s tempted to drink (something that has happened frequently since his arrival in Pennsylvania) he repeats words that remind him of his nephew, who is his main reason for not wanting to lose his sobriety. The monologue starts earnestly but then devolves into Kevin-with-his-head-up-his-tush, and it ends when Cassidy and Nicky can’t take it anymore and dissolve into a fit of giggles that Kevin eventually joins. 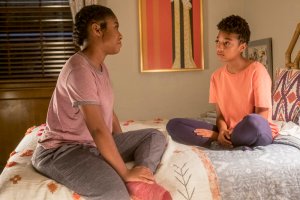 THE NEW GUYS | In Philadelphia, Randall and Jae-won are basically best buds and co-workers who go running together and celebrate Randall being called “unhinged” in the local paper. (It’s a play on the fact that he’s literally taken his office door off its hinges and pledged to be available to his constituents whenever they need to talk.) Jae-won keeps asking Randall for a few minutes to talk about his proposal, but Randall keeps getting busy with other things — like spending all damn day listening to citizens’ complaints or rebuffing some serious attitude dished out by his assistant, who’s been around the council for years.

But when the assistant offers up one too many eyerolls and annoyed sighs, Randall finally confronts her about her attitude. She tells him he needs to focus more on buddying up with his fellow council members and less on listening to the populace, and that she doesn’t approve of Jae-won, who is naïve and not fit for the role of chief of staff. What’s more, she has the maintenance guy put Randall’s door back on its hinges. For a minute, it seems like Randall agrees with her. But then he thanks her for her service and fires her. When he meets up with Jae-won at the end of the episode, the younger man notes how they are naïve and they aren’t career politicians — and that’s the whole point. They’re not using city council as a stepping stone to a bigger gig, “This is the gig,” Jae-won notes, and Randall agrees. Then the two starry-eyed idealists finally discus Jae-won’s proposal… which turns out to be the marriage proposal he’s planning.

In related news: Malik swings by the Pearson place to tell Deja he has a daughter; he didn’t want her to hear about it in school first. He adds that he’s raising the baby because her mother and her parents wanted to put her up for adoption, but he and his parents didn’t. Deja confides in Tess about it; in turn, Tess admits that she kinda led one of her new classmates to believe she was straight, and now she feels bad. 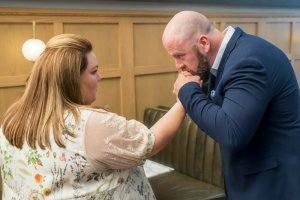 TOBY REVEALS HIS WOD BOD | When Kate arrives at a lunch where Toby is wooing prospective clients, she’s momentarily taken aback by how svelte he looks in his new suit. But she shakes it off and warmly greets his guests. Everything goes well until the hostess tries to seat their party in a booth, and she’s not willing to budge when Toby subtly asks to move to a table. It gets awkward, and then Kate just comes out and tells everyone that she won’t fit in the booth. The chagrined hostess quickly moves them all to a different area of the restaurant, but the damage is done.

At home, Toby is happy with how everything went, but Kate is focused on something else: She orders him to take off his shirt, and not in the sexytimes way. “Uh, holy crap,” she says when he’s topless, his “Popeye arms” on full display. He admits he’s secretly been doing CrossFit and didn’t tell her because he didn’t want her to feel bad about the weight she’s gained since Jack was born. He references his heart attack and how he doesn’t want to add to Jack’s burden by being a dad who could drop dead one day from weight complications. “Oh, like his mom might,” Kate says, clearly upset.

She goes outside to cry, catching the attention of their cranky new neighbor (hi, Psych‘s Timothy Omundson!), who’d previously grouched at her for the fact that Toby’s car often blocks the sidewalk. (A storage pod from the move is taking up most of their driveway, and it’s a whole thing.) Kate tearily explains that she’s got some stuff going on right now, and starts to go into detail when he stops her. “Sorry you’re having a bad day. I had a massive stroke two years ago,” he deadpans, adding that he had to re-learn basically every bodily movement, and he’s unemployed. “My only goal right now is to be able to walk one pathetic mile,” he says, and Toby’s car is impeding his daily walk around the block. After he vows to key the car if it’s in the same spot tomorrow, he turns and slowly limps back to his house. “This is me, storming away!” he snarks. “Don’t blink, you’ll miss it!” Heh.

Kate calms down and later tells Toby that she’s happy he’s getting healthier, but they can’t have any more secrets. He agrees. And the next morning, with the car well out of the way, she, Audio the dog and Baby Jack set out for a walk at the same time as their neighbor. They all end up strolling together. 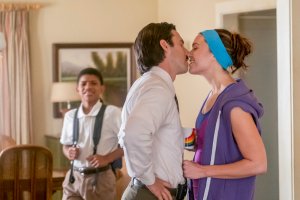 MIGUEL + JACK 4 EVA | In the past, 7th-grade Randall tries to impress a new teacher at his school, who hails from Chicago and is black, by wearing Air Jordans to class. But when his plan backfires and he gets written up for breaking dress code, he has a panic attack and calls home. Kevin — who, like Kate, is home because their school isn’t back in session yet — answers and bikes over to help his brother. He fakes Rebecca’s signature on the punishment slip and later, after learning that Randall has no idea who Arsenio Hall is, gets Jack and Rebecca to allow the kids to stay up and watch Hall’s late-night show.

At Jack’s work, the office is abuzz with news that an expensive new construction project didn’t have all of its permits lined up, so the foundation that’s already been poured will have to be ripped up — costing the firm a lot of money. Miguel gleefully remarks that whoever signed off on the project will probably get fired… and then he notices the sick look on Jack’s face.

Yep, Papa Pearson is the one responsible for the costly error. He goes straight to their boss to confess, and promptly is fired. When Miguel finds out, he marches back into the boss’ office and proclaims that if Jack is going, so is he — and as the top upper account manager, that will hurt the company, big-time. So the boss backs down, and Jack later calls his friend to thank him. “If you ever need anything big or small and I hear that you went to anyone other than me, I’m going to kick your sorry ass,” Jack tells him. Then they get as close to saying they love each other as two straight guys in the 1980s can (Miguel jokingly says it, Jack will not engage), and all is well.