You’ll have to forgive Jason Ritter if he’s a little coy in discussing his guest turn on A Million Little Things, which began Thursday. It’s just that series creator/showrunner DJ Nash is notoriously proud of keeping the show’s twists a secret. And seeing how Ritter’s character showed up at the end of Episode 2 as a stranger with an undefined connection to Maggie’s mom, Patricia, you can understand why the actor is hesitant to dish out too big of a scoop.

“There was a time where I called DJ to ask a question, and I was on a plane,” the former Parenthood star says, laughing. “And he was like, ‘If you have to talk in code, do it.’ I’m so nervous.”

Here’s what we do know: The mystery man’s name is Eric, and his true identity will be revealed in the Oct. 17 episode, which is titled “The Perfect Storm.” And given how Maggie stomped out of the restaurant when she saw Eric with her mother, we can guess that she’s not a fan. 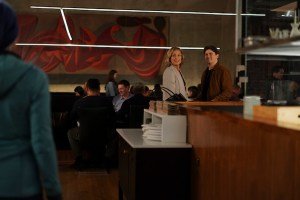 Nash tells TVLine that he developed the Patricia-Eric storyline after having lunch with Office alum Melora Hardin, who plays Maggie’s mother, over hiatus. “I was just talking to her, just hearing her rhythms and the way she approaches life, and it immediately led to her arc for the season, which is a beautiful story and hopefully has everything we want to do, which is the heartbreaking story that has humor around it.”

But when we push for details about what’s up between Ritter and Hardin’s characters, we get the sense that Nash is messing with us. “Are they dating? We’re not sure. Probably, because i said that, it means they’re not. Or maybe it means they are because I said that,” he teases, laughing as he promises (we think) that the truth about Maggie’s parents’ divorce will be made clear.

Whoever he turns out to be, look for Eric to be around for a while longer: Ritter confirms he’s in at least a “handful” of episodes this season.