Madam Secretary‘s Elizabeth McCord is president, and everything is right with the world.

OK, well not everything. The United States has been hacked, and the legitimacy of Bess’ presidency is now being called into question, and Henry has an uncharacteristically semi-embarrassing moment on Stephen Colbert’s Late Show couch. But President McCord sends no unhinged tweets nor colludes with any foreign powers during the series’ Season 6 premiere, so I’m calling Elizabeth’s first hundred days in office a win. FOR MY SOUL.

Read on for the highlights of “Hail to the Chief.”

WHICH STAFFERS ARE STILL AROUND? | The episode opens on a bathrobe-clad Elizabeth getting ready for a fancy fundraiser. Via Elizabeth’s conversation with her stylist, we learn that Alison is doing an internship abroad (which explains one of these). Eventually she’s all gussied up and ready to go; Daisy and Blake prep her in the car on the way to the fete, but Elizabeth tells them that “this is Henry’s night to shine, so I am perfectly justified staying out of the spotlight.” She meets Henry, Jason and Stevie — all similarly spiffed-up — at the venue. And when the McCords are ready to go, a cadre of Secret Service officers flank them. Elizabeth closes her eyes, takes a deep breath and walks into a ballroom… where she and Henry are announced as the President and First Gentleman of the United States. Text at the bottom of the screen indicates we are joining them 97 days into her first term in office. (Side note: We all knew she won the election, and yet I still loved this moment so very much.) 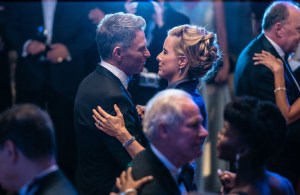 Mike B is there, as is Susan Thompson, the new Secretary of State. Mike reminds his boss that she’d better schmooze, because she’s got votes to win if she wants to get a key piece of legislation passed by Day 100. And sure, she does some of that. But she also beams at Henry as he speaks at the gala, which benefits The Arts and Creativity League, about how poetry inspired him to take the paths that led him to where he is today. And afterward, she dances with her husband while everyone watches and they tease each other about not having a ton of time together since the Inaugural Ball.

The next morning, Elizabeth is barely down from the White House’s residence when Mike starts badgering her about finding his replacement: He apparently agreed to be Acting Chief of Staff for the first hundred days, but “I don’t want the job Jay Whitman rejected” forever, he huffs. Two things: Jay left DC to be with the chess player from Holland he met at the airport last season. Yay! And Mike doesn’t want to leave the White House, just that role: His intention is to stay on as one of Elizabeth’s counselors. (Side note: The portrait of dear, deceased Gordon in Mike’s office is aces.)

As Elizabeth arrives at the Oval Office, I barely have time to rejoice that Blake is once more her assistant — those musical theater posters behind his desk!  — before she’s getting some bad news: It looks like Iran hacked the campaign of Elizabeth’s biggest opponent during the lead-up to the election, and because Miller was a harsh critic of her part in brokering the Iranian peace deal, people might think that she had a hand in the hacking.

But Elizabeth isn’t worried about her reputation or the legitimacy of her presidency. “Our democracy was attacked by a foreign power, and have to defend it at all costs,” she says gravely. Through flashbacks to the campaign trail, we learn that a reporter got intel about Miller having an affair — and a baby! — with one of his interns. The resultant story dinged his camp and made him look like a cowardly weasel, but didn’t take him out of the race… though he did lose status in his party.

When Elizabeth is given options for retaliation — all cyber in nature — she chooses all three. Soon after, the Senate Intelligence Committee leader Mark Hanson (hi, Prison Break‘s Wentworth Miller!) starts making noise on the cable news channels about how someone should investigate Elizabeth. Rather than deal with that, Elizabeth chooses to focus on getting her bill passed. Which is good… because Miller then comes out and accuses Elizabeth of plotting with Iran, making her presidency illegitimate.

HENRY DOES LATE NIGHT | Henry goes on The Late Show With Stephen Colbert to promote his cause: arts in education. Elizabeth’s hubby is kinda dad-jokey, kinda dopey during the visit. In the audience, Jason looks unamused. An ill-timed pause in an answer to one of Colbert’s questions makes everyone think Henry is talking about sex with Elizabeth (he’s not), and then Colbert gifts him a beer hat labeled “FGOTUS” and I think we should all just pretend this scene didn’t happen, cool?

U-N-I-T-Y | In another campaign flashback, Elizabeth comes up with a crazy idea: She wants Senator Morejon to be her vice president, even though he’s backed by a different political party. Mike is against the idea — Morejon is on Miller’s VP short list — but Elizabeth still meets with Morejon and pitches him the gig. He says no, explaining that he doesn’t think Miller is a good choice but he can be “the adult in the room” and check some of the senator’s more terrible impulses. “Wouldn’t you rather be on a ticket you really believe in?” she wonders, but he says he’s not as courageous as she is, and he turns her down. 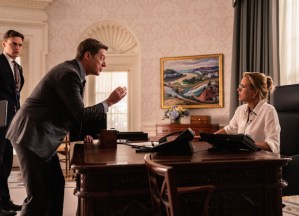 HOW THE SAUSAGE GETS MADE | In the present, Henry and Elizabeth have a quickie in the residence during a 15-minute lull in both of their schedules. Between that and Henry telling her “I find it sexy that you’re my Commander[ in Chief],” I think I am justified in saying: HAWT.

Onto something far less sexy: Elizabeth visits Sen. Miller to get him to reinstate his support for her bill. He’s repugnant. But politics is all about back-scratching, so she gets his vote by promising to ease his committee appointments and by doing a couple of other meaningless things solely to stroke his ego. A while later, her motorcade brings her to Russell’s house (!) to ask him to be her Chief of Staff for a transition period — he gladly takes the offer — and her bill winds up passing.

On Day 100, Elizabeth, Mike, Henry and Russell toast the legislation’s success. But you might want to hold off on the celebration, guys: Daisy, Blake, Mike B., Stevie and Henry get subpoenas from Hanson’s Intelligence Committee soon after: Elizabeth’s now the subject of a formal investigation.

But wait: Who’s Elizabeth’s VP? In a final flashback, we watch her talk to a vibrant rally crowd about unity. And then she introduces Carlos Morejon as her running mate.