S.W.A.T.‘s Captain Cortez must have really liked her five-week sampler of FBI training, because as hinted in the Season 3 premiere, she will not be returning to her post at L.A. Metro. 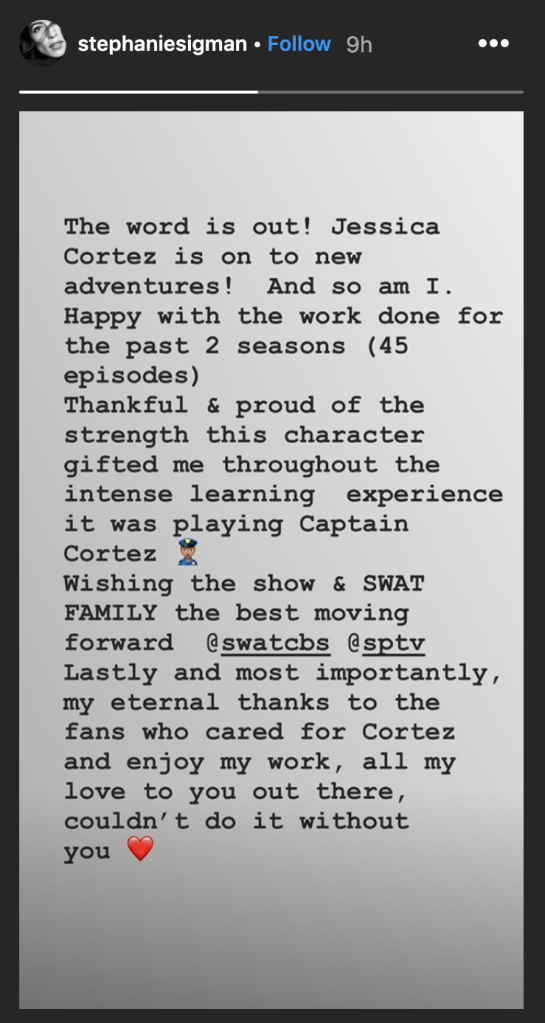 Original cast member Stephanie Sigman confirmed via Instagram on Thursday that “Jessica Cortez is on to new adventures… and so am I.” Indicating that the split was amicable, Sigman — who is due to give birth to her first child this month — wrote that she was “happy with the work done” over her two seasons with the CBS procedural, and is “thankful and proud of the strength” displayed by her alter ego (who in addition to serving as captain was also a sometime love interesting for Shemar Moore’s Hondo).

S.W.A.T. showrunner Shawn Ryan acknowledged Sigman’s IG, tweeting “Much thanks… for her tremendous work on S.W.A.T. It was a pleasure to write for her and see what she did with the role each week.

“Stephanie’s an extremely talented actress,” he continued. “I look forward to seeing what she conquers next professionally. We’ll be rooting for her.”

Potentially filling the void left by Sigman’s exit, Amy Farrington (Faking It, Beyond) made her S.W.A.T. debut Wednesday night in the series regular role of Detective Lynch, who was appointed by the mayor as a tactical consultant to Hondo’s team.

S.W.A.T. Season 3 is airing Wednesdays at 10/9c, where this week it returned to series-low ratings.