Thursday at 8 turned out to be decision time for many a Grey’s Anatomy doctor. Amelia and Link had to figure out whether they wanted to become parents, Jo had to choose between two tempting job offers, Richard had to weigh the pros and cons of sulking through his stint at PacNorth, and Bailey had to pick — or at least begin trying to pick — interns with enough potential to be the next Grey and Karev. Now it’s decision time for you, too: Will you read on to find out where things stood when the hour ended?

‘THE OCCASION IS I HAVE NO JOY’ | As “Back in the Saddle” began, Meredith learned that her medical-board hearing, though expedited, wouldn’t be held for three months; Ben encouraged Bailey not to let the firings/Koracick promotion keep her from claiming her joy at Grey Sloan; and since Jo was ready to return to work, Alex suggested that she join him at PacNorth, where she’d have free reign over her own fellowship. But her therapist had told her it would be advisable to resume her old routine as much as possible, even if that meant everyone at Grey Sloan staring at her like she was some fragile bird. Meanwhile, as Amelia kept Maggie company while she cleared her stuff out of Jackson’s place, the expectant doc wondered aloud whether she could break the news to Link in a text. Erm, no. Before they left, Amelia noticed that Jackson had posted a sunset photo the previous day… and hashtagged it “freedom.” Ouch.

At Grey Sloan, Tom relished the bizarreness of finding himself in an elevator with two other guys who’d slept with Amelia — Owen and Link. And he really relished telling Teddy’s babydaddy that “Catherine made me god of this place, so practice kneeling.” Nearby, Bailey rounded up the interns, as well as DeLuca and Koracick’s protégé from Hopkins, to compete to be the new Grey and Karev as they weighed in on the case of Wade, a 55-year-old with ED. When Maggie and Amelia arrived at the hospital, Pierce’s car was struck — hard — by a guy who’d stolen his girlfriend’s credit card to rent a scooter. Once the docs made it inside with their new patient, Jackson’s ex couldn’t resist asking how he was enjoying his freedom. Amelia made a beeline for Link, blurted out that she was pregnant and then fled to answer a page. Yes, it was a very zippy opening! 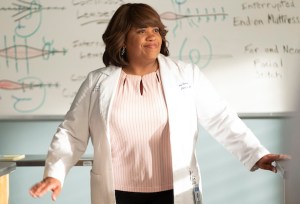 ‘THIS WAS YOUR IDEA, SO HELP’ | Throughout the episode, Meredith diagnosed her peers on the community work crew and then sent them to see Richard and Alex at PacNorth. (She even enlisted Schmitt to bring her supplies from Grey Sloan.) Mind you, Richard and Alex were in no position to receive the influx of patients. Not only was PacNorth’s trauma center tragic, but the hospital had only two residents — what kind of residency program, Webber wanted to know, was he supposed to run with just two residents?!? When Jo approached Bailey at Grey Sloan, Miranda, fearful that she might lose yet another doctor, shocked her by offering her carte blanche with her fellowship. Had Alex put her up to that? Jo wanted to know when she phoned her husband. First of all, no. And second of all, he had to go because it appeared that there was a dead guy in the waiting area.

OK, it turned out the guy wasn’t dead, he just looked it. So Alex and Richard rushed him to the O.R., where Webber noted that he’d been late for work that morning for the first time in, like, ever, because he’d accidentally driven to Grey Sloan out of habit. “I want to work in my hospital,” he grumbled, “but that is no longer an option.” Later, Alex pointed out that, although toiling at PacNorth hadn’t been in Richard’s plans — and certainly wasn’t as appealing as someday dropping dead in a Grey Sloan O.R. — he could still make the best of a bad situation. “Help me do the impossible” and turn this place around, Karev challenged him. “Help me prove Bailey wrong.” And it seemed clear that, moving forward, Richard was going to do just that. Alex would still have to do something about his office, however. A supply closet wasn’t gonna cut it! 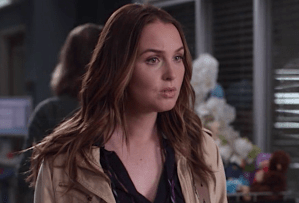 ‘YOU DEEP-FRIED MY ‘NADS’ | In class with the interns, Bailey said that the first person to complete a perfect practice [insert complicated medical procedure I can’t spell here] would get to perform it on Wade. DeLuca nailed it, with Taryn coming in a close second. Yet Bailey still let Helm do the procedure in the O.R. During surgery, Wade started bleeding from the intern’s suture line. When she panicked, Bailey allowed DeLuca to take charge and save the day. Later, when he accused his boss of sidelining him in the first place because of his relationship with Mer, Bailey countered that she’d sidelined him because Helm had needed experience. In other medical developments, scooter guy nearly died, sending Maggie into a tizzy. If both she and Mer went to prison, that would leave the kids with… Amelia?!? Luckily, scooter guy was brought back when he was shocked with EKG paddles for the 19th time… after which Owen accidentally delivered a jolt to Koracick’s privates!

Elsewhere in the hospital, Jo reassured Link that he’d make a great dad, despite the myriad, apocalyptic worries that any sane potential parent would have in 2019. Shortly, he sat down with Amelia, who opened up about Christopher. She knew that the odds of that heartbreaking history repeating itself were a million to one… but she also knew that if it happened, she wouldn’t survive it. What did Link think? Just one thing: that he didn’t want anything to hurt her. That was more important to him than his fears, than anything. So he would be there for her if she wanted to keep the baby and he would be there for her if she didn’t. “Dammit, Link,” she responded and walked out. Had he said the wrong thing? he asked when he saw Amelia at the end of the episode. No. She had just made up her mind before then, because she’d been scared. Now she felt less scared “and a little bit in love,” she added. “Please don’t say it back.” They both agreed that they’d make an amazing kid. What’s more, they both kinda wanted to meet that kid. 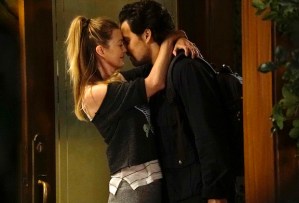 ‘I NO LONGER HAVE GOOD TIMES’ | When Jackson and Maggie bumped into each other at day’s end, she less snarkily than previously noted that “hashtag freedom is a little aggressive.” At least he hadn’t been being consciously spiteful. Jo announced to Bailey that she wanted to be a general-surgery attending. She’d be an asset to any hospital. “Do you want that hospital to be yours?” she asked. And, of course, short-staffed as she was, Bailey had no choice but to say yes. Alex was bummed that his wife wouldn’t be joining him at PacNorth but offered sound advice nonetheless. “Just make sure you get a parking spot,” he said. Oh, that was already taken care of. Bailey “gave me yours,” Jo replied. When Owen approached Koracick to apologize for the shock, Tom responded by asking him to step back — 500 feet back. He’d taken out an emergency restraining order against Hunt. (Come on, Tom — you’re better than that.)

And, after Meredith checked a nodule on work-crew supervisor Robin’s neck, she convinced Jackson to see her that very day rather than send her to County. Turned out, the woman has thyroid cancer. But if she missed work for treatment, she wouldn’t get paid, and if she didn’t get paid, she couldn’t pay rent, much less for an asthma inhaler. Insurance only paid for one a month — a second one cost $500… which she reckoned was cheap compared to the cost of treating cancer. Jackson would make sure she was given options, but she knew what they were: “Bankruptcy or death.” Off her day treating her work-crew colleagues, Mer told DeLuca, “I keep coming across people who can’t get the help they need because of the same crap.” So, although her attorney had instructed her to lie low until her hearing, she was fired up to publish a paper on the subject. “You’re very sexy,” he observed, “when you’re about to burn your whole life down.” Ah, we should all have a Meredith Grey in our corner.

So, what did you think of “Back in the Saddle”? Amelia and Link’s decision to become parents? Jo’s new title? Hit the comments.