This week’s A Million Little Things is titled “Grand Canyon,” which is fitting, given that the emotional damage Eddie has inflicted on Katherine is probably just about as deep as that wonder of the natural world.

Or perhaps the name is a reference to the size of the secret Maggie’s mom is keeping from her? Or the largeness of the trouble Andrew is brewing at Regina’s restaurant?

SNEAK ATTACK | Maggie isn’t jazzed about her mom’s impending visit, but Gary reminds her that a) he and Patricia made nice after their initial parking-spot tiff, and b) her last visit, while Maggie was in the hospital, actually went quite smoothly. “Because she was only here for one day, and I was heavily sedated,” Maggie quips as her mother’s cab pulls up in front of the apartment. But why does she have so many suitcases with her? “I’ve left your father,” she blurts. 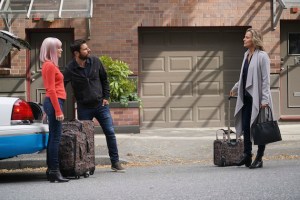 Patricia doesn’t add much more detail, aside from saying that she and Maggie’s dad “want different things.” Mags can’t get over the fact that, after 32 years of marriage, her mom wants to call it quits — or why Patricia seems so OK with it. A phone call to Dad doesn’t illuminate the matter further. Maggie is highly agitated but doesn’t want to call off their plans to meet everyone at Regina’s restaurant for brunch.

BLOOM WHERE YOU’RE PLANTED | Katherine finally returns home on the morning of Garden Day at Theo’s school. Both Eddie and Theo are overjoyed to see her, but Katherine’s flat facial expression makes it clear that her almost-ex-husband is not off the hook. The trio attends the event, where bitchy moms gossip about Katherine literally behind her back, and it all becomes a little too much for her. When Eddie sees her starting to cry, he makes an executive decision for the three of them to take off and get boba.

Later on, when Eddie can’t find Katherine, he fears that she’s left again. But she’s just upstairs in Theo’s room, looking at the sheet-and-pillow fort the guys rigged up in her absence. He hurriedly says that he’ll decamp to Maggie’s now-empty apartment, but she stops him. She recalls meeting Eddie when she was in law school and saw his band play at a bar. “I spent my whole life planning for tomorrow, and you taught me to live for today,” she muses. “Well, you taught me to believe in tomorrow. And I really want a tomorrow with you,” he says.

“Maybe instead of trying to get back to what we were, we figure out what we’re gonna be. I’m not sure what that is right now,” she says. “Don’t go to Maggie’s. I need you to stay here and help me get through this.” Then she asks what Delilah had; Eddie answers that the baby is a girl. “Congratulations,” Katherine says, and there is no way in hell she means it.

Later, Katherine joins Eddie as he reads Where the Red Fern Grows to Theo in the pillow tent.

I KNEW YOU WOULD SAY THAT | Delilah can’t remember the song she and Jon used to sing to the kids when they were babies, and she’s wracking her brain when Barbara and Mitch show up on her doorstep. They’ve been getting mail from Rutledge Trust, and they’re confused. “Jon left you money,” Delilah explains. Mitch instantly rejects it. “We don’t hear from the guy for 17 years, and then out of the blue he leaves you half a million dollars?” he says. Delilah reasons that he wanted to be there for Barbara and her baby: Jon’s widow figured out that PJ isn’t Mitch’s biological son.

At the restaurant, Delilah has a little breakdown about how she continually failed Jon and is doing so again by not being able to get Mitch and Barbara to accept the Rutledge money. They’re interrupted by Andrew coming in to carp about how Regina needs to get back to cooking; brunch is booming, but he’s not pleased about the business’ flagging numbers during the week. He also mentions that one of Regina’s old friends is there, so she goes into the dining room to greet Ilan (hi, black-ish‘s Nelson Fralkin!). Turns out, they haven’t seen each other in five years and he’s a psychic — which earns a guffaw from Gary — who claims to have “picked up on” the fact that Delilah was a widow when they met moments before.

Maggie is impressed by Ilan’s abilities; Gary, less so. And when Regina suggests that Delilah book a session with the seer, everyone but Gar is on board. Maggie even wants to accompany her, so Gary tags along, too (ostensibly to watch little Charlie).

Ilan’s reading takes a left turn when he mentions a car accident. Delilah is puzzled, telling him that Jon committed suicide. But Ilan maintains that the spirit he’s talking with is her brother. “I don’t have a brother,” Delilah answers, but a tearful Maggie quietly says, “I do.” 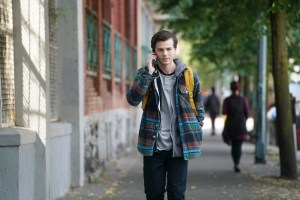 WHO’S HE? | Gary scoffs hard, irritating an already emotional Maggie. She goes for a run when they get home, so she’s not there when her mom gets back from apartment hunting. Patricia and Gary have a heart-to-heart about how both Bloom women really miss Chad and generally should talk about their feelings more with each other. Then Gary suggests that Patricia move into Maggie’s old apartment.

When Maggie returns from her run, Gary apologizes for not being supportive and points out that Patricia told him she was in Boston because she wants to be grateful for what she has now as opposed to continually mourning the past. So Maggie softens and goes to the restaurant Gary recommended to her mom. Patricia isn’t there yet, so she hangs out at the bar and chats with a friendly guy (hi, Parenthood‘s Jason Ritter!) who is charmingly flirting with her.

Minutes later, Patricia comes in and goes straight to the charming guy at the bar. They look cozy — though not necessarily romantically so — but Maggie sees enough to send her running from the restaurant.

I MAY BE MAD, I MAY BE BLIND, I MAY BE VICIOUSLY UNKIND | Later on, Delilah pre-apologizes to Charlie for all the things she’ll do wrong in her lifetime. While doing so, she suddenly remembers that the song she and Jon used to sing to their babies was “Why” by Annie Lennox. (Side note: An odd choice, no?)

Elsewhere, PJ and Rome hang out after PJ calls and is a little upset about his dad. They wind up at Rome’s place, where the teen asks about a group photo of the guys but slips up when he accidentally indicates he knows which one Gary is. When Rome presses him on it, PJ admits that he wasn’t at the hospital by accident the day they met: “I think Jon might be my father.”

Now it’s your turn. What did you think of the episode? Let us know in the comments!