Is there anything more sneakily heartbreaking than the passage of time?

There’s a sequence at the end of this week’s This Is Us that I found suddenly, devastatingly heartbreaking. Before you worry too much: No one died. No one broke up. No one revealed a terrible diagnosis or anything of the sort. The visual simply showed us The Big Three as little kids, curled up for a nap with their dad during Season 1’s “The Pool.” Then it juxtaposed that with a shot of the kids as preteens, each sitting on his or her own lounger, completely disinterested in engaging with Jack and Rebecca — much less snuggling with them.

This type of separation is completely normal, and it’s the way things happen, and independence is good for kids but OH MY HEART.

Elsewhere in the hour, Kate relies on a coping mechanism, Toby finds a new one, Randall and Beth ease up, and Kevin takes a trip. Read on for the highlights of “The Pool: Part Two.” 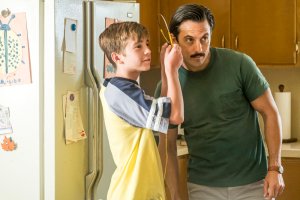 MAKING A SPLASH | In the flashback time period I like to refer to as “Mustache Jack” era, it’s the end of summer vacation right before Kate, Kevin and Randall go into seventh grade. Jack wants to do something fun as a family, so he and Rebecca announce that they’re all going to go to the town pool. Unlike the last time we saw this happen, the kids want nothing to do with the outing.

Still, everyone grabs their suits and arrives at the municipal watering hole. The kids, embarrassed by their parents, quickly scatter to be with friends. Rebecca raises an eyebrow when two of the popular girls in Kate’s class ask her to hang out with them. “I don’t trust that,” Rebecca says to Jack. Kevin and Randall hang out with some black friends of Randall’s who are soon very enamored of Kevin and his ability to rap Wreckx-N-Effect’s “Rump Shaker.” Preteen Kevin continues his tradition of being The Worst when he then tells Randall to spit a few lyrics, knowing full well that his brother isn’t that familiar with the song. Poor Randall tries, though, and it goes pretty much the way you’d think it would. “How is your brother blacker than you, Randall?” one of the friends asks, laughing. “Randall’s an Oreo,” the other says. See? THE. WORST. Later, when Kevin and the other kids are in the pool, Randall purposefully messes with his brother’s cassette.

When Kevin realizes what happens, he and Randall get into a shoving match. “You embarrassed me in front of my friends, and you liked doing it,” Randall says, and he’s not wrong. “You’re supposed to be my brother.” This somehow sinks in, and Kevin ashamedly creeps off to sit with Jack. He wonders aloud if he’s a good person, because “I do so many bad things,” he confesses. Jack mentions that the men in their family tend to have rough emotional issues, but then says that “having people to care about” will turn Kevin into the man he wants to be. 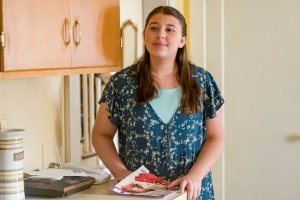 KATE OWNS THE COOL GIRLS | While this is happening, Rebecca’s maternal instincts are being proven true: The popular girls, indeed, trick Kate into thinking that a cute boy from her class wants to kiss her behind the snack stand. Some boys do the same to another boy, only he thinks that Kate wants to kiss him. Instead of reacting the way the girls expect her to, Kate is emboldened by hearing that the boy wanted to kiss her, so she takes the initiative and gives him a peck on the lips

Then we get the aforementioned kids-grow-up-so-fast scenes, in which we see flashbacks to The Big 3 as preschool poppets (the cuteness! It is too much!) and cuddly, slightly older kids before returning to the preteen sulky versions we’ve spent time with this episode. 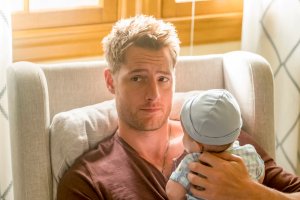 KEVIN’S DILEMMA | In the present, Nicky isn’t returning Kevin’s calls, though he sent a terse text saying he was OK. Kevin leaves his uncle a voicemail requesting more detail, “seeing as how I did wire you all that money for bail.” On the whole, though, Kev seems like he’s doing well: He’s attending Alcoholics Anonymous, he’s working on a movie directed by M. Night Shayamalan and he’s kept a houseplant alive for some time now.

As Kevin wraps his final scene on the film, Shayamalan pulls him aside to drop this pearl of wisdom: When he strips down all of his charming BS, “You’re absolutely incredible.” Um, thanks? In AA, Kevin tells the group that he’s been trying to be as supportive as possible to Kate and Toby in light of Little Jack’s recent diagnosis, “but I never know what to say, what to do.” We also learn that he’s on the short list for a Spike Jonze movie that’s about to start shooting in Chicago, but he’s torn about whether to stay with his family or whether to keep busy on the movie, which in turn will help him focus on maintaining his sobriety. 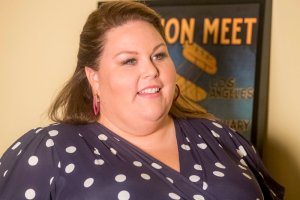 KATE BREAKS DOWN | Kate seems to be handling the news about Little Jack well, and she and Toby hire a consultant to come to the house to talk about how to raise a blind child.

Kevin, Rebecca, Miguel and Madison (for some reason) are there when the consultant arrives, and everyone is a) impressed with how Toby appears to have lost weight, and b) a little weirded out by how chipper Kate seems. It’s apparently not long after the events of the season premiere, and Toby tells Rebecca that Kate has been “steady” every day since the diagnosis. “To be honest, I’m kind of in awe of her.” Still, Rebecca wonders whether she should be concerned about her daughter. “She’s overeating, Rebecca,” he says quietly. “And I know that is just her way of dealing with difficult emotions. But of all the things I am worried about right now, she’s at the top of my list.” 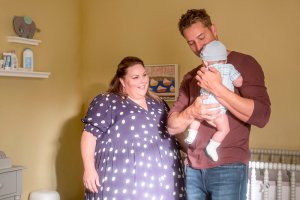 Kate’s overly OK veneer cracks during the visit, when she talks about Little Jack watching the Pittsburgh Steelers play football and realizes that he’ll never actually see a game. Everyone takes a break, which gives Kevin an opportunity to go into the nursery and soliloquize to his nephew. Kev remarks that he’s 187 days sober that day, almost 40, “and the most successful relationship in my life is with a frickin’ houseplant.” Kate hears all on the baby monitor and comes in a moment later, an they have a heart-to-heart. She’s worried that her desire to have a baby, despite what doctors said about the risks associated with her size, is directly responsible for her son’s blindness. He worries about being away if he takes the movie role, which he’s officially been offered. Then Kate instructs him on how to hold Jack so he won’t freak out — the key: use your voice and touch to prepare him so he’s not scared when you pick him up — and suggests that Kevin take the film and focus on his sobriety.

Feeling better, Kate carries her son into the living room and announces to everyone that “I don’t want worry to be the prevailing feeling in this home. I want it to be hope.” She adds that Baby Jack will live “a life without limits.” Then he poops, and everyone laughs, and yay?

That night, after everyone is gone, Toby tells Kate he’s going to go grocery shopping. She’s giving Jack a bath, absentmindedly eating cookies while doing so. But Toby doesn’t actually go grocery shopping — or, at least, that’s not the primary reason for his trip. We see him at the gym, working out his stress on the battle ropes. Guess those missing pounds aren’t all due to stress, eh Tobes?

Later, we see Kevin travel… but to Pennsylvania, not Illinois. He shows up at Nicky’s trailer with his houseplant, which seems to indicate he’ll be there a while. “I didn’t need you to come,” Nicky says. “I know,” Kev replies. 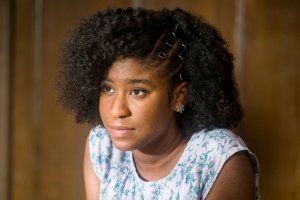 SETTLING IN, ACTING OUT | In Philadelphia, Randall and Beth want to have a fun end-of-summer day with the girls before school starts, too — and just like in the flashback, their teens aren’t so into it. So they amend the plan: Beth will take Tess (and Annie) to the salon to get a haircut, and Randall will accompany Deja on a trial bus ride to make sure it’s a safe way to get to and from school. Then everyone will meet up for family fun in the afternoon.

The bus ride goes badly. Randall freaks when some twitchy guy sits down next to Deja and starts talking to her. After he dispatches him, Randall forbids her to ride the bus, telling her he’ll drive her instead. “The bus is full of weirdos. I can handle myself,” she protests, reminding him that she took the bus all the time when she lived with her mom, and “something that makes you uncomfortable reminds me of where I’m from.” Still, he won’t budge, and she rolls her eyes in anger.

At the hairdresser’s, Tess is terrible to her mom in that way that girls her age are, while Beth frets about how her daughter is opting for a very different look from the one she’s sported since she was little. “Before long, the little girl I knew like the back of my hand is someone completely new, and it just makes me so sad,” Beth admits to Randall when they meet up. But she later puts on a happy face and tells Tess she loves her new ‘do, then Randall introduces the girls to the Worst Case Scenario game he and Beth like to play sometimes. They all play a round related to their move; during it, Randall relents and says Deja can take the bus to school as long as she texts him when she gets there safely. Then everyone charges up the stairs of the Philadelphia Museum of Art, aka the steps Sylvester Stallone runs in Rocky.

Also of note: The bus goes right by Malik’s dad’s garage, and when she surreptitiously snaps a photo of the teen working during her ride and then texts it to him, their banter is increasingly cute and flirty.