As cliffhangers go, “Who shot J.R.?” it wasn’t. But it was still kinda fun that Monday’s episode of The Voice left us hanging, wondering whether Cali Wilson would choose John Legend, Blake Shelton or Gwen Stefani to be her coach. (Only Kelly Clarkson’s chair, you’ll recall, had remained unmoved during the contestant’s haunting rendition of Fleetwood Mac’s “Dreams.”)

Aand… at the top of the hour, we learned that Cali opted to go with Blake. From there, NBC’s sing-off put through five more acts to the Battles. But, were any of them strong enough contenders that you thought they’d get to, much less past, the Knockouts (which thankfully have re-replaced the Live Cross Battles in Season 17). Read on, and we’ll discuss. 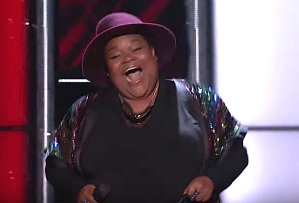 Injoy Fountain (Team Kelly), “7 rings” — Grade: C+ | “As a single mother, I have to make it for my child,” this onetime Rent “Seasons of Love” soloist told us before her Blind. And on stage, she made it, alright, earning chair turns from both Kelly and Gwen with her loose but impassioned Ariana Grande cover. I didn’t hear a ton of technical proficiency, but she definitely had energy to spare. As Kelly put it, “She’s a force.” I just wasn’t convinced that she was gonna be a force to be reckoned with.

Jordan Chase (Team Blake), “Makin’ Me Look Good Again” — Grade: B | Presented at first as a real Blind, this 19-year-old dazzled from the start with a fantastically lived-in vocal — Gwen called it “a real man voice” — that was at the same time so polished, it would’ve been easy to believe that he was an old pro. Still, it took ages for him to get any chairs turning. Post-performance, Blake praised the fact that Jordan had both a “sandpaper voice” and great range. For some reason, Gwen went on and on about how she could imagine being a 19-year-old boy. 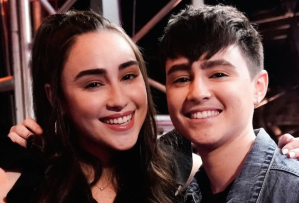 Dane & Stephanie (Team Legend), “Angela” — Grade: B | Dane told us in his pre-interview that he was born Dana but realized that he was transgender when he was 14. Thankfully, his twin sister/singing partner was supportive and loving when he came out. On stage, they sounded beautiful together on their Lumineers cover — very chill and coffeehouse, with vocals so synchronized, you could’ve convinced me that the same voice was just being layered on top of itself. In the long run, I’m not sure they’ll be able to compete with the vocal pyrotechnics that the show generally favors. But in the short run, they’re going to be delightful to listen to.

James Violet (Team Gwen), “Sweet Creature” — Grade: B- | Since this 20-year-old’s performance came at halftime in the show, I was afraid he wasn’t going to get a chair turn (there’s always one!) — and I liked him; he was funny. For instance, his secret shampoo, he told us, was water. And he had something to prove, having had his ass kicked as an L.A. busker. When he stepped behind the mic, he demonstrated admirable control without it diminishing in any way the sincerity of his performance. Kelly likened his vocal to a nice glass of wine. I’d go back for a refill, sure, but I wasn’t certain he’d stand out from the other singers in his crowded lane. 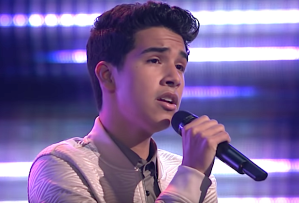 Preston C. Howell (Team Legend), “Dream a Little Dream of Me” — Grade: B+ | Adorably earnest, this 14-year-old got himself a four-chair turn with a Mamas & the Papas cover that was as soft and airy as a summer cloud. At first, I was on the verge of filing his audition under “Pleasant, Nothing More,” but the baby-faced wanna-Bublé refused to let me do so. He put enough of his own spin on a line here, a line there, that I thought OK, maybe he could compete with what John called the show’s usual noisy “fireworks.”

So, who, if anyone, really dazzled you Tuesday? Vote in the poll below, then explain why (or why not) in the comments.