As The Voice’s Season 17 Blind Auditions continued Monday, NBC’s sing-off teed up performances by a junior-varsity Stevie Nicks, a folkie Dylan-come-lately and an R&B singer that Kelly Clarkson thought was handsome enough to model. But did any of this latest batch of contestants sound like they had what it takes to make it to the Finals? Read on, and before you vote for your Night 3 favorite, we’ll discuss.

Mendeleyev (Team Legend), “Girl From the North Country” — Grade: B | This son of hippies — maybe you could’ve guessed by the fact that he was named after the inventor of the periodic table (if I heard that right) — told us in his pre-interview that his folks introduced him to… well, folk music. On stage, he earned a four-chair turn with a spare, bare Dylan cover. “I feel like a warm blanket was just wrapped around me,” cried Kelly afterwards. Mendeleyev’s voice was deep and resonant, and his presence, so sincere that I quickly forgot that he was wearing overalls. 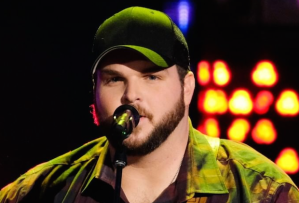 Jake Hoot (Team Kelly), “When It Rains, It Pours” — Grade: B | This 6’6″-tall good ol’ boy from Tennessee spent a spell getting stuff off the top shelves for people in the Dominican Republic, he told us pre-performance. Now a divorced dad back in the States, he hoped to support his little girl through his music career. When he stepped into the spotlight, the first notes out of his mouth all but screamed, “I’m for you, Blake” (even though only Kelly turned her chair for him). Jake had as strong a country voice as Cory Jackson, but without the theatricality that I thought might hurt Cory in the long run.

Calvin Lockett (Team Gwen), “Just My Imagination (Running Away With Me)” — Grade: C+ | Before taking to the stage, this pastor’s son expressed unease about singing outside of the church. Behind the mic, it showed — you could hear the nerves, and he didn’t look terribly comfortable, either. But there was overall a lovely smoothness to his vocal — Gwen called it “so relaxing” — that won over all of the coaches but Kelly. John praised Calvin for giving a “masterful performance” that wasn’t showoffy. I wasn’t sure he wouldn’t need some showoffiness to go the distance. There was none of the dynamism that made, say, Chris Blue such a contender in seasons past. 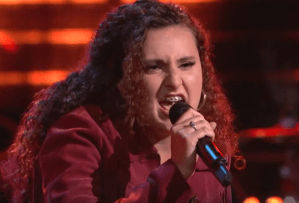 Josie Jones (Team Blake), “Men & Mascara” — Grade: B+ | When this Alabama 16-year-old stepped up to the mic, her vocals sparkled more brightly than her braces. The contestant that Gwen decided sounded like a “little baby” Stevie Nicks stretched lovely, warm notes like they were taffy, and demonstrated what Blake called “a straight laser tone.” My instinct was to say that this was really, really good, but not the most exciting performance ever. However, that had been my first impression of Lauren Duski, too, and she wound up being one of my all-time favorites.

Marybeth Byrd (Team Legend), “Angel From Montgomery” — Grade: A | This small-town girl, who works at Big Byrd’s food truck with her pop, even looked in her pre-audition Q&A like she was gonna have presence. There was just an underlying intensity to her. And when she took her turn behind the mic, yeah — she just had “it” with a capital “I.” On her way to a four-chair turn — though Kelly had used the last Block on Blake — she sang with tremendous confidence and emotion, and gave the impression that she honestly meant every word she sang. Major contender alert. 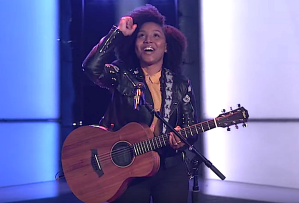 Kiara Brown (Team Gwen), “Freefallin'” — Grade: B+ | This Vegas 21-year-old, we learned before her Blind, was humming melodies even in the crib. After the Route 91 Harvest Festival shooting, she wrote a song that she’d been told had helped give comfort to those who’d lost loved ones. When she took to the stage, thankfully, her star quality didn’t stop at her million-dollar smile; there was absolute sunshine in her voice. She didn’t strain, didn’t go over the top and didn’t have to. She sounded gorgeous and totally in control of her instrument. I was stunned that it took so long for her to start chairs turning!

Melinda Rodriguez (Team Kelly), “What a Wonderful World” — Grade: C | This Miami-based 23-year-old informed us that her brother had assured her that she’d be the one to make jazz cool. (Wait, it isn’t?) He was even risking missing out on a heart transplant to be at her audition. Unfortunately, Melinda’s rendition of the Eva Cassidy version of the classic was pretty but, in the end, pretty forgettable. When Melinda was done, John praised her for taking liberties with the melody — but, tellingly, he hadn’t swiveled his chair for her. 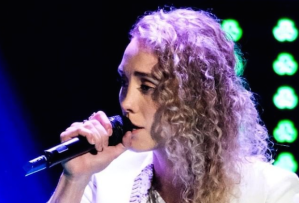 Cali Wilson (Team TBD), “Dreams” — Grade: B | This 28-year-old kickboxing instructor from a small town in Iowa got her love of music from her mom. Since Cali was the night’s last audition, well, we knew she’d get chair turns. But would she wow us? Yeah, actually. Her sparsely-arranged Fleetwood Mac cover was haunting, her voice ethereal yet unwavering throughout. Very cool. I’ll be curious to see how much power she can pack into a vocal.

So, who really wowed you Monday? What did you think of the show not revealing Cali’s pick for coach? Vote for your favorite of the night in the poll below, then hit the comments.