The Walking Dead’s Alpha had no idea quite what a badass she was making an enemy of when she beheaded Henry in Season 9. But in Season 10, she’s sure to find out that the boy’s mother Carol is not someone whose s— list she wants to be on, much less atop. “Knowing Carol’s history, I think [a smackdown is] pretty likely,” EP Greg Nicotero told TVLine on the Saturn Awards red carpet. “She really doesn’t take things lying down.”

Longtime fans of the AMC drama — which returns Sunday, Oct. 6 (9/8c) — are keenly aware that that might be the understatement of the decade. After all, Carol not only survived banishment by Rick and singlehandedly demolished Terminus, she set freaking fire to the leftover Saviors who insisted on continuing to pose a threat. Now, having lost Henry, and in the most horrible way imaginable, “she’s definitely got a vendetta,” Nicotero said. 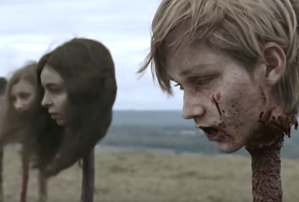 And Carol isn’t the only one who has an axe to grind with the Whisperers’ fearsome leader. The good guys “all do,” Nicotero pointed out, “if you really think about it. Last season, the communities had sort of lost contact with each other.” As a result, Alpha was able to slap on a wig and freely roam about the Kingdom’s fair, picking out noggins with which she wanted to decorate her border wall. So it wasn’t until it was too late that “Michonne realized that if she had kept the communities together, they may have noticed Alpha.” — Reporting by Diane Gordon