Well, it’s about time! After what felt like an endless summer away from Grey Sloan — the struggle was real — Grey’s Anatomy at last refilled our prescription for new episodes Thursday, kicking off Season 16 with an hour full of mini-fast-forwards that took us from a marriage proposal to a surprise pregnancy, from a massive promotion to a new flirtation, and from a defection to another hospital to… well, this recap. And now that you’re here, read on; before you grade “Nothing Left to Cling To,” we’ll review all of the big plot twists. 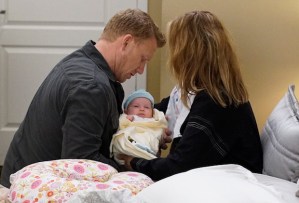 ‘I DO NOT SEE ME FORGIVING ANYONE BUT MYSELF ANYTIME SOON’ | The episode began pretty much right where Season 15’s finale ended. While Jo checked in for psychiatric treatment, Maggie and Station 19 firefighters discovered Jackson helping a climber named Mari hold on to the rope that was keeping her unconscious husband Jai from plunging to his death. Richard was at an AA meeting complaining that Catherine hadn’t said a word when Bailey fired him, just as Meredith was learning from her lawyer that she was unlikely to lose her medical license, much less go to prison. But, Grey admitted, “I did this long, dramatic goodbye with my kids.” Over beers, Link, when not assuring Alex that Jo would get better, admitted that he thought Amelia had dumped him. And at Grey Sloan, Bailey interrupted Leo’s introduction to Alison to order Owen and Amelia to prep for an incoming trauma. When he protested that Teddy’d just had their baby, Bailey shot back, “She’s very cute. I still need you to come. Altman, you’re excused.” Left alone with both the newborn and Leo, Teddy was just about to cry for a nurse when in came Tom, keenly aware that she and her babydaddy had reunited. It was OK, though. She’d regret that decision one day, he said. “When you do, I’ll still be here, because I’m in love with you. And in the meantime, we are friends.” (I could not love Koracick more.) 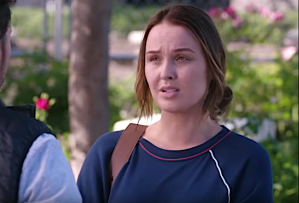 ‘WE’RE NOT EVEN LEGALLY MARRIED’ | One week later, as Alex dropped off Jo at the psychiatric facility where she’d ultimately undergo treatment, she beat herself up for becoming yet “another name on your list of crazy women” and noted that, since they’d never filed their marriage license, “You have an out, and I guess I’m saying I love you enough that I’d understand if you wanna take it.” Somehow, Alex didn’t say a word as she walked away after that. Back at Grey Sloan, while performing a successful surgery on Mari, Amelia clarified — in language that even guys could understand — that she didn’t want to stop seeing Link, she simply didn’t want to bury herself in him. She wanted them to date, to get to know each other, thus breaking her pattern of going all in too fast. At Teddy’s hotel room, Owen found the new mom weeping along with Alison, who wouldn’t stop crying. “Just come home with me,” he pleaded. But no, she didn’t want to move into the home he’d bought for Amelia. “That’s not the way you and I are supposed to start our lives together,” Teddy said. She knew it in her soul. And her soul really preferred that hotel room? Maybe it was best not to ask her soul too many questions just then. “My soul needs a shower,” she cried. At Grey Sloan, Jackson made the terrible mistake of asking Maggie how “they” were before she’d adequately cooled off after their fight. In response, she accused him of leaving her “in a car on an unfamiliar road in the woods surrounded by fog and bears and wolves!” Bears and wolves? Really? “I could hear them!” she insisted. Meanwhile, as Richard slummed it making house calls for a medical app, Meredith had her day in court… and blew it. She just couldn’t quite bring herself to take her attorney’s advice and appear repentant. “She has three kids,” the lawyer finally interjected. “Don’t throw her in jail!” 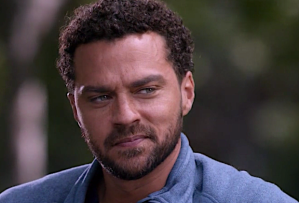 ‘TOM KORACICK IS MY PUNISHMENT’ | One week later, Jai crashed suddenly, just stroked out, leaving Jackson wondering aloud whether Mari should’ve just let him go. “In this metaphor,” asked Maggie, “am I the thing that should just be thrown off a cliff now?” No, he replied. But maybe they as a couple were. (Stick a fork in ’em, folks; they’re done.) Nearby, Bailey hit the roof when she learned that Catherine had put Tom in charge of all of her hospitals, making him “chief of chiefs.” Turned out, though Catherine was silent when Bailey fired Richard, she was still pissed. Now, she hollered, “my husband is making house calls like it’s 1965,” and her marriage was in shambles. Off that argument, a cocky DeLuca offered Bailey his services, which, short-staffed as she was, she had no choice but to accept. One week later, Maggie reported to Mer, Amelia and DeLuca that her breakup with Jackson was sticking. “I think I deserve better,” she said, “than someone who regularly abandons me for trees.” And hey, they were still friends. For his part, Jackson was quick to move on; he asked out Station 19‘s Vic, who seemed very open to the idea. Owen showed up at Grey Sloan looking for Teddy after he’d made — good God — such a mistake. “I offered to milk her,” he admitted to Amelia. Yes, she’d had a clogged duct, but still. No, Owen. God, no. During a therapy session with Alex, Jo read a letter in which she apologized for losing the ability to receive the love he was offering. He read a letter to her as well, one in which he admitted that he’d been scared when she pushed him away. “You deserve someone who doesn’t break like glass,” said Jo, whose therapist reminded her that seeking help was a sign of strength, not weakness. 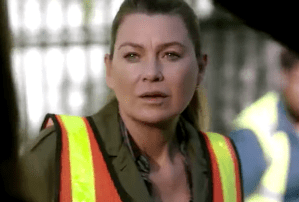 ‘I HATE MATERNITY LEAVE’ | On Amelia and Link’s fun dinner date, talk of her desire to have her first three-way somehow led her to think of Private Practice and a patient whose condition was much like Jai’s. Thanks to a telltale rash in that case, Jai’s doctors were able to figure out that a fat embolism was to blame for his condition, too. They could potentially wake him from his coma! The following day, Jackson and Vic had a casual burger date, during which they both admitted that they were fresh out of serious relationships and, therefore, not in the best place to start something new. But they got on so well, it was clear that they were most definitely starting something new. While picking up trash roadside as part of her community service, Mer was spotted by the classroom mom at Zola’s school. “I always wondered why we never saw you volunteering at the school,” said classmom, “but now I get it.” Mer was right in the middle of explaining what it meant to be a working mom when her supervisor yelled that she wasn’t at Happy Hour. At Grey Sloan, Bailey happened upon Teddy, who was desperate to use her brain and decidedly not loving maternity leave. “I think I might be a terrible mother,” she admitted. Nah, said Bailey. She’d hated maternity leave, too, and she was an awesome mom. After interviewing for the chief of surgery post at failing Pacific Northwest General, Richard visited Alex to encourage him to go for the job. Webber knew that he wasn’t going to get it — the interviewer had “practically called me Grandpa,” he noted. But if Alex got the gig, then he could hire Richard. He had another bright idea, too: If Karev was worried about his marriage, he needed to give Jo a reason to come back home.

‘I DON’T WANT AN OUT’ | One week later, just when Mari had given up on Jai ever waking up, ta-da! He did. When Jo emerged from the treatment facility following her 30 days there, Alex was waiting, freshly shaved and dressed in a snazzy suit. “Marry me again, please,” he said, getting down on one knee. “I don’t want an out. You offered me an out.” Though she explained that she wasn’t “magically fixed,” he didn’t care. He wanted to love her in sickness and health. That being the case, she accepted his proposal. At Teddy’s hotel room, Owen reported that he’d put his house on the market and, until it sold, had gotten them a suite at the hotel. Being a new mom is hard, and she didn’t have to do it alone, he wanted her to know. “Thank you for listing the house,” she replied. At the hospital, Amelia hilariously approached Carina, who was confused at first about the why. “Are you here for your pregnancy,” she asked, “or just asking for a menage a trois?” Amelia was there for the latter reason, but… “Oh my God,” she gasped as she realized that she might be there for the former reason as well. As the episode drew to a close, Maggie spotted Jackson with Vic and got colder than ice. Your affairs are “none of my business,” Maggie decided, “’cause I don’t like you, and you don’t like me, and we’re not friends.” Finally, Catherine pitched a fit when she found out that Richard was going to work at PacNorth with Alex, and Meredith got a text saying that — uh-oh — the medical board was going to be pursuing action against her license.

So, was that premiere eventful enough for ya? Grade it in the poll below, then hit the comments with your favorite/least favorite parts.