A skeptic and a true believer team up to investigate supposed paranormal activity, and — twist! — their names aren’t Scully and Mulder. Welcome to CBS’ Evil, the new drama that scratches that spooky-with-a-dash-of-sexual-tension itch you might have in the ­X-Files‘ absence.

In a moment, we’ll want to know what you thought of the new drama from The Good Wife‘s Robert and Michelle King. But first, a quick recap of the premiere:

Kristen Bouchard (Westworld‘s Katja Herbers) is a New York-based forensic psychologist who frequently works for the Queens District Attorney’s office. When we meet her, she’s questioning a serial killer who has murdered three families but claims not to have any memory of the murders. She’s sure he’s sane and fit to stand trial, but the killer’s lawyer puts forward another theory: His client is possessed by a demon. 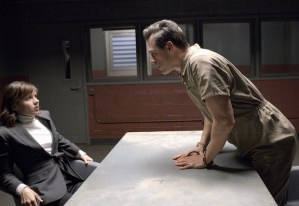 Kristen thinks the man is being coached, and he himself denies that he’s under the control of an evil spirit. But when she draws a cross on the table in the interrogation room and starts reciting The Lord’s Prayer, he suddenly jumps on the table and knocks her over, spouting Latin the whole time. Guards rush in and pull him off, but Kristen is rattled. When the DA pressures her to declare him fine, she balks and tells him to get someone else to lie for him on the stand.

At home, we see that Kristen is the mom of four young daughters, and her husband is a mountain climber (she was one, too) who’s off leading a trip to Mount Everest. Her disapproving mom (Chicago Hope‘s Christine Lahti) helps with the girls. And from a threatening phone call Kristen gets, we can infer that she owes someone a lot of money.

Before the whole Latin incident in the interrogation room, a man (Luke Cage‘s Mike Colter) gave Kristen a rosary and told her to keep it for her protection. He later shows up at her house and introduces himself as David Acosta, an operative for the Catholic Church. Along with his colleague Ben (The Daily Show‘s Aasif Mandvi), Mike investigates cases that might be possession to determine whether an exorcism or further research is needed.

That night after the girls go to bed, Kristen keeps hearing a slithery sound in her house. And when she goes to sleep, a demon appears in her bedroom and addresses her like a beloved colleague. She tells herself he’s a night terror, which he tries to disprove by urinating in the corner of the room. Her terror mounts as he lifts the covers and makes a reference to her caesarian section scar; when she screams, her daughters run in. She tells them it was just a dream, and they wind up spending the rest of the night in her bed. Kristen recounts the entire tale to her psychiatrist during a visit the next day, and he chalks it up to sleep issues.

The next night, Kristen tapes a sign to her bedroom ceiling, then goes to sleep. The demon appears to her once more and introduces himself as George. He quizzes her about flirting with David, even though she’s married and he’s training to be a priest. He cuts off one of her fingers (!) and Kristen is terrified… until she looks up and realizes she can’t read her sign. She reasons that she’s dreaming, because the area of the brain that processes reading is dormant during sleep. When she wakes up, she sees the sign very clearly: It reads “Can you read this?” 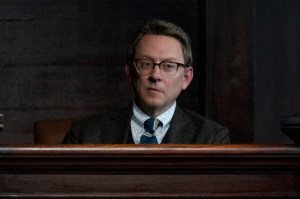 Throughout, it looks more and more like the murderer actually is possessed by a being that calls itself Roy — and it knows about George’s visits to Kristen’s bedroom. “George will slash the throats of your daughters,” Roy tells her, which naturally freaks her out in the extreme. But then on a hunch, she goes to her shrink’s office and learns that all of the notes from her sessions are gone. She tracks them to a Dr. Townshend (Person of Interest‘s Michael Emerson), who just happens to be a forensic psychologist working for the defense.

“You’re in waaaaay over your head, Ms. Bouchard,” Townshend warns her at the courthouse, vaguely threatening to have her children killed. David runs up to run interference. “Leland, you have no power here. She doesn’t believe,” he says, prompting Townshend to taunt him with a mention of someone named Julia who was “crying on her knees, weepy little bitch.” Now it’s David’s turn to be shaken.

At a bar afterward, David tells Kristen that Julia was “a friend,” and he’s seen Townshend “in other guises.” He explains that the shadowy doc is a “connector,” aka someone who pretends to be normal “but their real pursuit is evil, encouraging others to be evil” for the sheer pleasure of it. Kristen says that he just described psychopaths, and David agrees: That’s where their fields overlap.

Kristen, David and Ben eventually realize that Townsend and the killer connected online via social media and Townshend encouraged the murderer to rape and kill. The blackout defense was a total lie, and Kristen eventually finds a paper trail that shows Townshend coached the killer on how to fake demonic possession (hence the Latin).

Back at Kristen’s place, she drinks a mini-margarita as David and Ben outlines their next case: a miracle. Will she join them? “I mean, I could have a look,” she says.

Now it’s your turn. Grade the premiere via the poll below, let us know whether you’ll return for Episode 2, then hit the comments with your thoughts on the episode!