This Is… a really good move for a show in its fourth season.

But wait a minute, we’re getting ahead of ourselves. In honor of This Is Us‘ new season, we’re going to choose one thing that caught our attention from every episode. The selections may be tiny or tremendous, silly or serious — and we’ll always want to know what you thought of the hour, too.

First up: the new spate of characters we met in the Season 4 premiere. 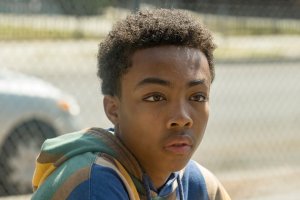 When NBC released the series’ latest trailer in August, it offered fans a first look at a whole bunch of new characters entering the Pearson family’s orbit. There were at least 10 fresh faces, including a military mama (?) played by Once Upon a Time‘s Jennifer Morrison and a doting dad (?) played by House‘s Omar Epps. But the preview seemed a little light on The Big 3 — aka Kevin, Randall and Kate — and some fans began to worry that perhaps we wouldn’t see as much of the show’s central family as we had in the first three seasons.

As Thursday’s premiere proved, these fears were unfounded. Yes, the episode spent a lot of time with new characters like Morrison’s Cassidy, a Marine recently returned from duty whose rough re-entry into normal life tore her family apart. Yes, we had a bunch of scenes with Asante Blackk’s Malik, a Philadelphia teen trying to do right by both his infant daughter and his supportive parents (Epps and When They See Us‘ Marsha Stephanie Blake). But their stories were so compelling — and the performances so gripping — that it made perfect sense when each character’s trajectory put them right in the path of a Pearson or two.

On that note: Malik (as Deja’s potential love interest) and Cassidy (as someone adjacent to Nicky’s storyline) in particular will be able to offer an outsider’s perspective on the family we’ve gotten to know so well over the past three seasons, which is likely to shake the story up a bit in a good way. Series creator Dan Fogelman addressed the newbies in a call with reporters Tuesday, saying the characters introduced in the Season 4 premiere would “change the course of people’s lives.”

He added: “It’s not just to add characters to the story. These stories are really about Randall and Kevin and Kate and Jack and Rebecca. So these characters are servicing them while also rounding out our world.”

What did you think about the characters introduced in this week’s This Is Us?