black-ish‘s Bow knows medicine. Bow knows how to raise a family. But Bow does not know many common cultural touchstones of the 1970s and 80s, thanks to her early childhood in a peace-and-love commune.

Rainbow Johnson’s upbringing, a frequent punchline on the ABC comedy, now has its own prequel spinoff series: mixed-ish. The title refers both to Bow’s parentage — she’s got a white dad and a black mom — and to the way she and her siblings felt when unforeseen circumstances forced them out of communal living and into the harsh world of 1980s suburbia.

The story begins with black-ish‘s central family sitting down to watch the 1984 film Breakin’, which Bow confesses she’s never seen. “You grew up in a cult. It’s amazing I ever met you,” Dre remarks. “How did you ever survive your childhood?” 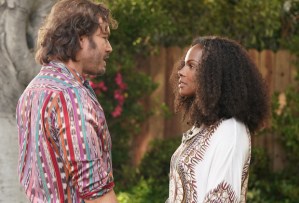 From there, Bow narrates as we flash back to her as a 12-year-old (played by newcomer Arica Himmel) in the summer of 1985, when her “life changed forever.” She — along with siblings Johan (Ethan William Childress) and Santamonica (Mykal-Michelle Harris) and parents Alicia (The Haves and the Have Nots‘ Tika Sumpter) and Paul (Saved By the Bell‘s Mark-Paul Gosselaar) — lived in a “hippie, judgment-free utopia where loved ruled all.” However, compound was raided that summer for being in violation of more than 47 federal regulations, and its members scattered. 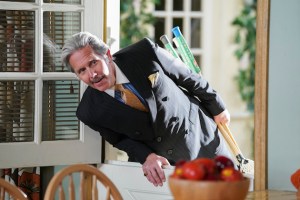 Bow and her family wound up living in a rental home owned by Paul’s father, Harrison (Veep‘s Gary Cole), an unrepentant capitalist and big-shot lawyer. While Paul tried very hard to keep up the communes ideals — no TV, family meetings involving a talking stick — Alicia realized that she’d have to put her law degree to use and get a job. So she traded in her flowing sundresses for power suits and took a job at Harrison’s firm… much to Paul’s dismay.

At school, Bow, Santamonica and Johan were overwhelmed by the number of kids and the pace of life, not to mention the questions hurled at them. “What are you weirdos mixed with?” one kid asked. “What’s ‘mixed’?,” Bow wonders aloud. At home, the incident forces a conversation about race — a novel concept for the kids, who’d had many mixed friends in the commune. 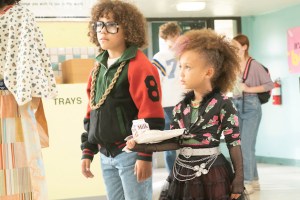 All the changes irk Paul, who is mad that Alicia (and Santamonica and Johan, thanks to some sneaky TV viewing) have given up on their old way of life. But Alicia firmly points out that as a white man, Paul can be however he wants to be, wherever he wants to be. But it’s different for her and the kids. He then realizes that he’s holding on to a vision of the world the way he wants it to be instead of how it is, and they all talk about how they’ll find their way in this strange new environment.

The whole things ends with Harrison bringing over some water guns and everyone — even the anti-gun Paul — having a huge water fight in the backyard.

Now it’s your turn. Grade the premiere and let us know whether you’ll continue watching via the polls below, then hit the comments with your additional thoughts!