This week on The Affair, Noah wants to reconcile with Helen — but is it too late?

The morning after the Halloween party, Noah ambushes Helen at work and apologizes for attempting to sabotage her relationship with Sasha. He says he only did it because he’s still in love with her, and he’s convinced that she feels the same way. But Helen insists that she’s not in love with him. His love “terrifies” her, and he’s caused her nothing but pain.

As the episode progresses, Helen begins to see the cracks in Sasha’s movie-star veneer. He turns away the daughter of his dead fiancée Lily, who he insists is just after his money (which, to be fair, is at least part of it), then pulls out of a film at the very last minute to shoot yet another sequel to The Maze, despite a promise he made to the director, who is married to Helen’s client. 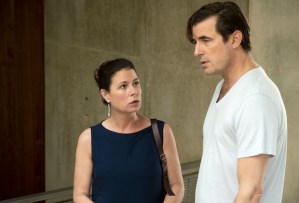 Helen also starts to see how her selfish streak is impacting others. She returns home to find 12-year-old daughter Stacey babysitting Eddie after she refused to do Sierra a solid. Then there’s Vik’s mother Priya, who begs and pleads with Helen to pretend to be Eddie’s mother for one night only, so the brother who ostracized her decades ago doesn’t think any less of her dead son when he finally comes to visit.

Unlike previous installments, the episode does not include a glimpse at the future timeline — but we do get a blast from the past. At a party, Helen is approached by Noah’s former publicist Eden. She introduces herself to Sasha and hands him her business card in case he’s ever in the market for new representation.

The other half of the episode focuses on the aforementioned Sierra, who is struggling to hold it together as a single mom. At one point, she leaves the four-month old in her car while she heads inside for an audition. On the drive home, she receives a call from her mother, Adeline (played by Patrick Melrose‘s Jennifer Jason Leigh), who is back in town after some time in Nepal. She invites herself over, craps all over Sierra’s performance when they run lines, then flakes out after she’d already agreed to look after Eddie.

After she wraps Day 1 of production on the Madam Bovary movie, Sierra heads out to a nightclub and does coke with the film’s director (played by Madam Secretary‘s Geoffrey Arend), who tells her that she’s 10 times the actress her mother ever was. They hook up in a bathroom stall, then an intoxicated Sierra returns to retrieve Eddie from Helen’s house. Despite being in no condition to get behind the wheel, she puts Eddie in his car seat and takes him for a drive around the block in an attempt to quiet him down. At one point, she turns to check on him and blows past a stop sign. She swerves to avoid oncoming traffic and totals her car. Once she regains consciousness, she exits the vehicle and retrieves Eddie from the backseat, who has nary a scratch.

What did you think of The Affair Season 5, Episode 5? Hit the comments with your reactions.