“There’s no place like home” took on an awful new meaning for June in Sunday’s Fear the Walking Dead — as in, she discovered that there apparently was no place left in the world that she and her fellow survivors could call home. Rubbing salt in the wound, her search for a spot outside of which they could plop a welcome mat resulted in one of their own biting the dust. Who’d they lose? Read on… 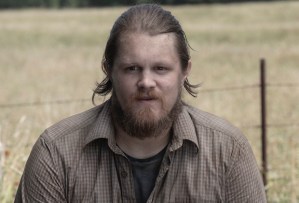 ‘THE FUTURE ISN’T SOME FAR-FLUNG FLIGHT OF FANCY’ | “Channel 5” began with an informercial that looked and sounded a lot like the one that Al & Co. had made, except that this one starred Ginny and her cohorts, and had been edited to make it appear that Tom was on board. In response, Al first got mad (what had that poor TV ever done to her?), then decided to get even by shooting a new documentary that revealed even the hard parts of what Team Altruist was doing. Tom, having been reunited with sister Janice (the woman Wes saved at the truck stop), was particularly eager to help support the group that would prove to Ginny that “everybody is useful.” While Grace received treatment for her mystery ailment, Alicia pondered her future as a painter and Charlie learned how to play the guitar, June fretted that maybe she’d pointed the gang in the wrong direction in hopes of finding a home. With gas running low, they were considering turning around when up lumbered a walker wearing a Humbug’s Gulch sherriff’s badge. There was a location nearby, John suddenly remembered, and it might make the perfect home. 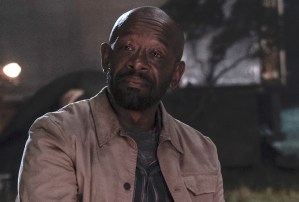 ‘THIS IS THE PART YOU WON’T SEE ON VIRGINIA’S TAPE’ | Unfortunately, the group only got to be happy and optimistic for a minute before Grace collapsed. She needed fluids — fast. So the convoy took a detour on the way to Humbug’s Gulch to search a retirement home for IV bags. After John began to suspect that Morgan liked Grace with a capital L, he became more determined than ever not to let his own romance come to an untimely end with anything left unsaid or undone. To that end, he suggested to June that they tie the knot as soon as they reached their destination. Once Grace was treated for dehydration, Morgan had the perfect opportunity to come clean about his feelings, but all he could muster up was, “I’m just glad you’re feeling better.” Everything was coming up roses again when yup, our heroes ran afoul of thorns. First, they got stuck on a maxed-out bridge that would never hold the tanker. Then, when they refused Ginny’s offer of assistance, she had her henchman fire shots in the air to attract walkers. 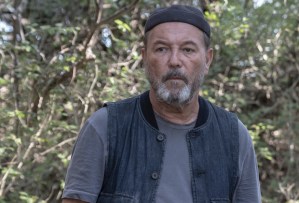 ‘THIS IS NOT THE END OF THE ROAD — I WON’T LET IT BE’ | Team Altruist splattered a whole bunch of walkers to ensure that everyone in their group made it to the other side of the bridge safely. Even Tom, who remained on the bridge longer than seemed safe or sane, looked like he was going to make it — he didn’t plunge to his death when the tanker fell through. But since he stayed there filming even after that, he was killed when the rest of the bridge collapsed. (At least I think that was what happened. There were a lot of cables snapping. In any case, he didn’t make it.) Later, Morgan reassured Al that this wasn’t the end of the road for them. And it truly wasn’t — they’d soon find themselves hiking 10-15 miles to Humbug’s Gulch. On the way — cute couple alert — Wes told Alicia that when they arrived, he’d paint with her. John asked Jacob to officiate his and June’s wedding, and recruited Morgan to be his best man. And without ever mentioning Grace’s name, Daniel encouraged Morgan to say whatever he had to say already.

‘WE CAN EAT TONIGHT, WE CAN LIVE TOMORROW’ | With five miles to go, Morgan attempted to open his heart to Grace, but she wouldn’t let him. “It’ll only make things harder,” she said. So close! And soon, no one would be in any mood for a romantic declaration: When they arrived at Humbug’s Gulch, they found it overrun by walkers. And since they had no food, no water, no shelter for miles, there was only one thing they could do, Strand said: Call Ginny. Upset, Al turned off her camera at that point; though she was all about telling the truth, she couldn’t bear to document this. Sadly, Morgan admitted to Al that this was the end of the road after all. Dwight couldn’t go along with that — he’d walk before he’d join Ginny and basically become a Savior again. Nonetheless, after June tearfully apologized for leading the group nowhere and Morgan apologized to Janice (since he was returning her to the baddies from which she’d fled), he called Virginia.

So, do you assume we will see Sherry in the finale since Ginny mentioned that one of her engineers had met Dwight’s wife? Do you like the idea of Wes and Alicia as a couple? Do you think Grace will survive the season?