THE PERFORMANCES | The 2019 Emmys are just hours away, but after binging Netflix’s often grueling yet ultimately life-affirming eight-episode, fact-based drama our minds are focused on next year’s ceremony and this dream scenario: the Outstanding Lead Actress in a Limited Series contest ending in a tie between Collette and Wever. Never before has a title of a project so aptly described the performances of its stars, but the duo’s thoroughly intertwined work was so staggeringly rich and subtle that it does indeed defy belief.

As dogged serial rapist-chasers Grace Rasmussen and Karen Duvall, Collette and Wever infused their alter egos with complexity, intelligence and empathy, breathing new life in the well-worn “buddy cop” genre. So consistently sublime was their work that it made choosing specific scenes or even a particular episode especially challenging. Ultimately, we settled on a scene in Episode 6 which finds the two detectives bonding during an all-night stakeout. No single Unbelievable sequence better illustrates the magic of this pairing, the effortlessness of their chemistry, than this one.

The meaty, bare bones two-hander — which is destined to become signature Forensics competition fodder in the category of Duo Interpretation — begins with Rasmussen offering a rare apology to Duvall for belittling her faith during an earlier stress-induced flare-up. Underscoring her alter ego’s unfamiliarity with eating crow as well as her deep affection for her partner, Collette endearingly stammered through her mea culpa. “Sorry for the whole ‘f–k the Lord’ thing,” she muttered, before conceding, “It was not my finest moment.”

With the table set for air-clearing, Duvall similarly lowered her guard and copped to being a longtime “fangirl” from afar, Wever expertly keeping her character’s idol worship in check as much as humanly possible so as not to further tip the power imbalance. But Wever made sure to lace her words and mannerisms with enough genuine, if restrained, sentiment to let the audience know how impactful/empowering their decade-earlier encounter was for her then-green detective.

When the nearly 9-minute scene ended as abruptly as it began, we felt a similar admiration for Collette and Wever, two actresses at the very top of their game who have given birth to one of TV’s all-time best partnerships. 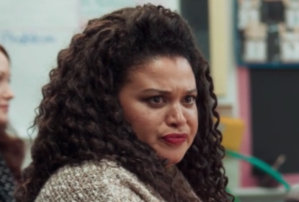 HONORABLE MENTION | Go ahead: Try not to guffaw when First Wives Club’s Michelle Buteau, as Bree, launches herself at the PTA mom she’s just realized is sleeping with her estranged husband. In the seconds before the Episode 2 outburst, Buteau’s facial features flit around the emotional spectrum: narrowed eyebrows of suspicion, widened eyes of realization, flared nostrils of “bitch, you’d better duck!” When Bree shoots out of her seat, nearly flipping a desk in the process, Buteau doesn’t hold a thing back: She yells, she points, she convincingly turns “THOT” into an adjective. Perhaps the actress’ skill is best shown a moment later, when Bree instantly goes from combative to crushed: “I want a divorce,” Buteau says, making Bree’s voice small and defeated. It’s a strong center-stage moment for an undersung comedic actress — and we hope Buteau gets a lot more of them in the future. 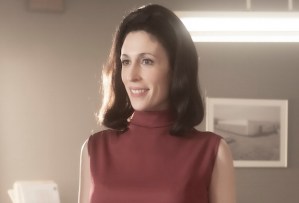 HONORABLE MENTION | The “Found Diary That Fuels Flashbacks” trope can be a bore if you don’t have the right cast playing out the past. But Cara Mantella, in her third but by far largest Lodge 49 appearance, pulled us deep into Jackie Loomis’ strange world and showed us how the Lodge’s trappings shaped her as a woman of the ’60s. To start, Mantella portrayed Jackie as dutiful to Wallace, seeing them as partners — especially in their plot to pinch the scrolls from Lodge 1. When Wallace proved ill-fit for that escapade, Jackie rose to the occasion. Energized, she drew the attention of the Parabola Group’s Werner, and Mantella showed us a bolder Jackie who thought she could recognize a capable cohort. Alas, he, too, let her down. But rather than join Wallace in a suicide pact, she chose life — in part to watch over Larry, who come wartime would need his mother, greatly. 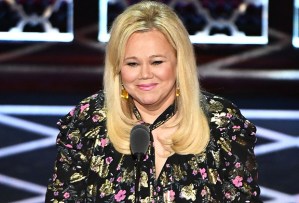 HONORABLE MENTION | Let’s be honest: None of us expected Caroline Rhea, most fondly remembered as Aunt Hilda on Sabrina the Teenage Witch, to hold her own at a notoriously ruthless Comedy Central roast. And yet she thrived during Sunday’s “tribute” to Alec Baldwin, eviscerating her fellow roasters with a steady stream of savage-yet-tasteful burns. Introduced by Sean Hayes as having just flown in on “the world’s strongest broomstick,” Rhea replied that he’s “going to be hard to top… but plenty of men have managed to do it.” From that moment on, it was clear — Aunt Hilda did not come to play. She even found time to make fun of Ken Jeong for actually thinking that Beyoncé was the Unicorn on The Masked Singer.